With the huge advancements in technology, Artificial Intelligence is the buzz word in today’s world. While technocrats consider it a blessing, it has become a hot topic of debates and discussions and many might consider it a disaster. AI in simple terms is a machine modeled on the human brain that can solve problems that are usually done by humans.

The official definition of Artificial Intelligence was first coined by John McCarthy in 1955 at the Dartmouth Conference. Although there was plenty of research done on AI by others including Alan Turing in the past, it was an undefined field before 1955.

Here is what Mccarthy proposed “Every aspect of learning or any other feature of intelligence can in principle be so precisely described that a machine can be made to simulate it. An attempt will be made to find out how to make machines use language form abstractions and concepts, solve kinds of problems now reserved for humans and improve themselves.”

In essence, AI is an umbrella term that enables machines to learn, think and mimic human intelligence, and consequently transform industries. There are many forms of intelligence and AI has many aspects such as perception, reasoning, planning, motion, and natural language processing.

Developments in AI are leading to fundamental changes in the way we live. It’s shaping and influencing our world in many visible ways. AI is only at its dawn and algorithms can already detect Parkinson’s disease and cancer and control both cars and aircraft. The rapid growth of this technology offers many opportunities, but also many dangers. It might soon get difficult to distinguish between fact and fiction and natural and artificial.

So are we buying comfort at the cost of privacy? Does AI pose a danger to our freedoms or democracy? Are humans eventually going to lose their ability to comprehend? Let’s dive deeper into it.

Despite debates, the advantages of Artificial Intelligence applications are enormous and can revolutionize any professional sector. Let’s see some of them.

Errors are a part of our practical lives. However, computers make no errors, as long as you’re programming them properly. AI processing ensures error-free data processing, despite the size of data.

With AI, the decisions are taken from the previously gathered information applying a certain set of algorithms. So there is a chance of reaching accuracy with a greater degree of precision.

These days, the weather is forecasted using AI which has reduced the majority of human error.

AI has created a new standard for productivity and efficiency. For instance, if you’re texting someone and your autocorrect software automatically corrects your misspelled word, you’ve just experienced a benefit of AI.

AI processes petabytes of data quickly and accurately for real-time results and this isn’t something a human brain is designed to do. This has improved the overall efficiency of various mundane tasks.

3. Takes Risks Instead of Humans

The biggest advantage of AI has to be how it takes risks instead of humans in various dangerous tasks. An AI robot can do anything from mining for coal and oil to diffusing a bomb that can overcome various risky limitations of humans. They can be used in situations where intervention can be hazardous.

An average human cannot work continuously. They need breaks in between and they get tired. But unlike us, machines are never tired. They can work 24×7 for consecutive hours. Their efficiency isn’t affected by external factors. We can take the helpline centers and digital queries that are handled using AI.

Also known as a virtual assistant, AI provides us with digital assistance. From many websites to organizations, digital assistants are gaining popularity by the day. Some chatbots are hard to distinguish from an actual human being.

Siri, Cortana, and Alexa are some examples of virtual assistants and which don’t need much of an introduction.

Humans tend to analyze various factors emotionally and practically before making a decision but machines aren’t designed that way. The AI-powered machines work on what it is programmed and deliver the results in a faster way than humans would.

We’ve all played chess or any board games on the computer. It is almost impossible to beat the computer in such games because AI is behind it. It will always take the best possible step in a very short time following the algorithm used behind it.

As every bright side has a darker version in it, Artificial Intelligence also has some downsides. Let’s see some of them.

A new AI system is costly to build. Although prices are coming down, it might be too expensive for average people. Besides, machines and software need constant maintenance. Those who don’t have huge funds will find it difficult to implement AI.

The cost depends upon the scope of that particular AI.

AI is replacing the majority of mundane tasks and other works with robots and computers, and humans are losing their jobs. Because of its level of accuracy, every organization wants to work with robots rather than humans.

Soon, this problem will grow only bigger and unemployment caused by AI will be a massive issue. One obvious tech that could replace millions of humans is self-driving cars.

Humans are getting addicted to AI applications which are making them lazier by the day.

Not just physically lazy, they’re becoming mentally dependent on the use cases of AI. They are losing their ability to think rationally, computers are doing everything for them.

4. Lack of Out of Box Thinking

Machines cannot think creatively; they just do as they are programmed. Anything out of the box could crash them or give irrelevant outputs.

It might sound like a scary nightmare out of some Hollywood movie, but the day robots enslave human beings may not be as far away as we think. Even Stephen Hawking and Elon Musk have brought light upon the possibility of this happening.

The term ‘AI takeover’ is used, which is a scenario in which AI becomes the dominant form of intelligence on Earth, with computers and robots taking control over the planet. It is crazy to think there is a possibility that human creation might affect the world in such a scary way.

With these pros and cons, it is important to keep in mind that technology is never inherently good or evil, it’s how it’s used and implemented. Projecting our misuse onto the technology would be wrong and Artificial Intelligence is no different in this aspect.

The world can benefit a great deal from the existence of artificial intelligence and while jobs may be created, some will be lost, lives may be saved but some might die. Many potential dangers come with this technology about which we should be mindful. Humans could acquire plenty of innovations if AI will be available to everyone but if only a few hold its power, the world will be a very scary place to live in no time. 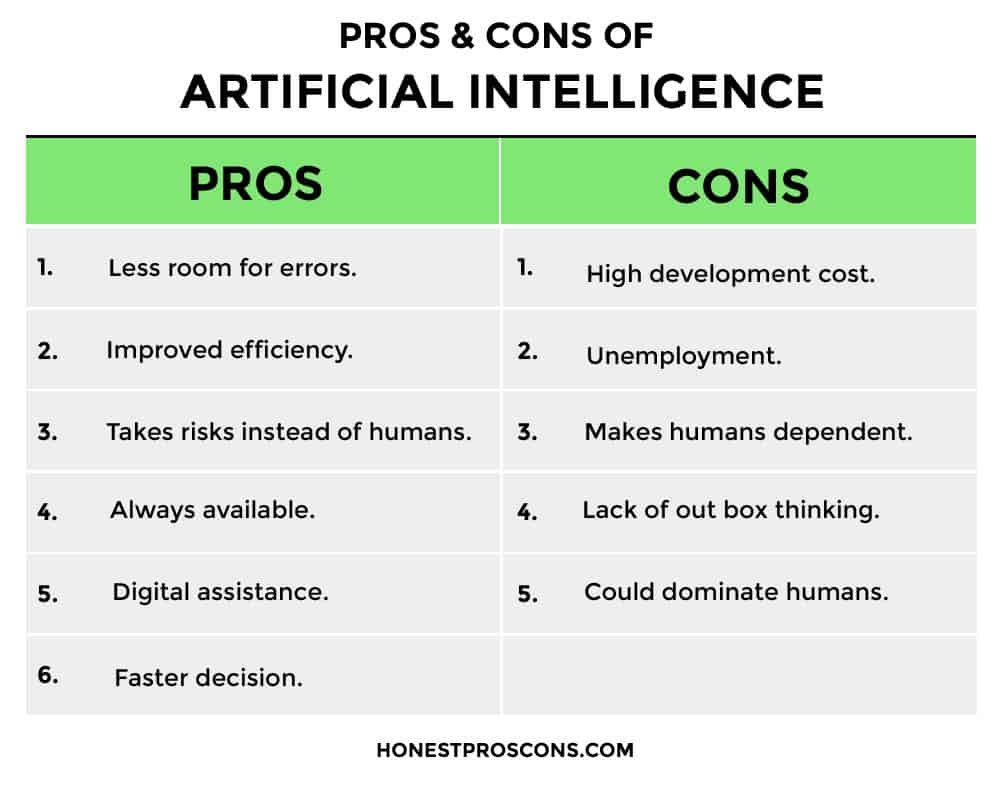