An All-Wheel Drive (AWD) vehicle refers to a vehicle with drivetrain capable of supplying power to all four wheels of the vehicle all the time or only when needed. There are two different types of All-Wheel Drive i.e full-time and part-time.

Advantages and Disadvantages of All-Wheel Drive 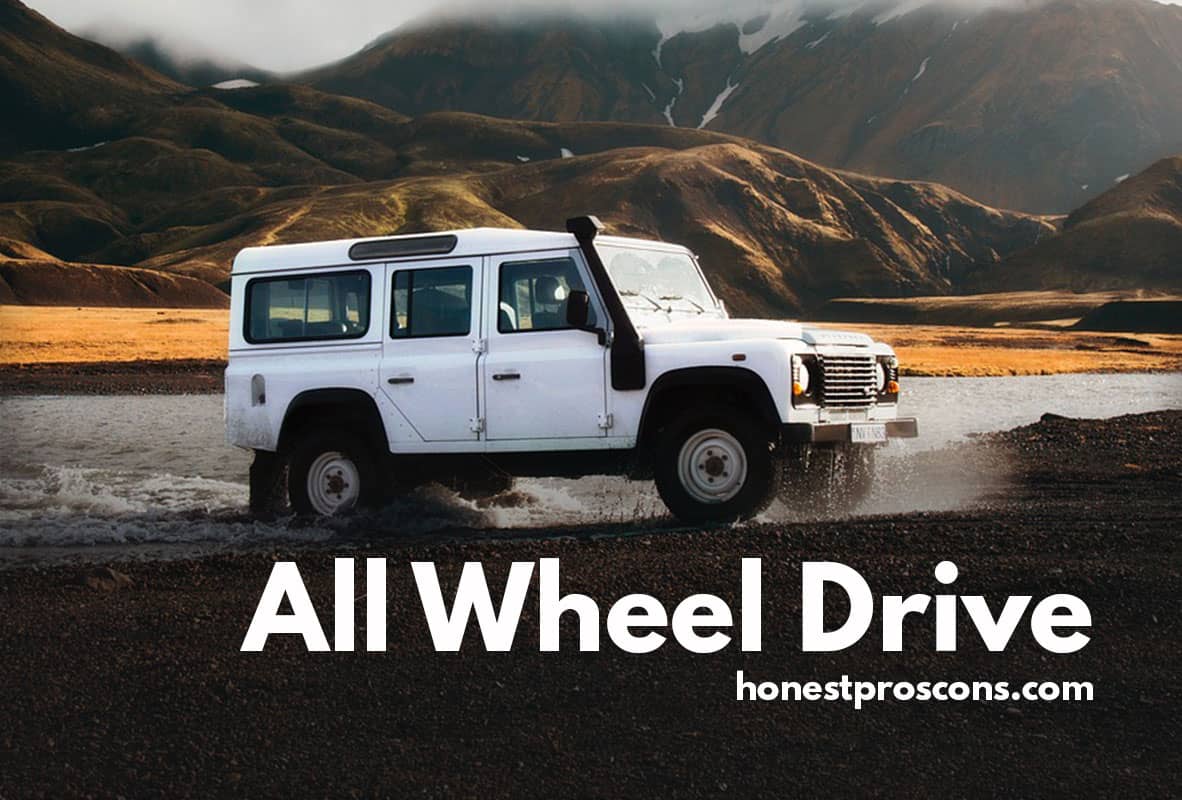 Generally, AWD systems work with no input from the driver but there are some vehicles that allow a certain degree of control over how much power goes into each wheel. The power distribution is indicated in percentage, so if a system is “70/30”, it means a maximum of 30 per cent of engine power goes to the rear wheels and remaining to front. Some systems go even further to distribute power to each wheel.

The first All-Wheel Drive car ever built was the 1900 Lohner-Porsche. It was designed by Ferdinand Porsche for Ludwig Lohner & Co. and was also the first-ever hybrid car. Each wheel of Lohner-Porsche used an electric hub motor, powered by batteries which were charged by a gasoline-engine generator. Three years later, Spyker 60-HP was introduced as the first all-wheel-drive vehicle with an internal combustion engine.

The demand for AWD vehicles increased exponentially, especially for the military. During the first world war, Nash Quad, an all-wheel-drive truck became the standard truck for the US army.

However, only 20% of the total trucks were AWD and because of that, most of them were on the front lines. These quads came with four-wheel steering along with the four-wheel drive and four-wheel brakes.

The market for the all-wheel-drive vehicle was not satisfied as all the produced AWD vehicles were either for military or the government. The first production car available for sale to general people was CJ-2A, a model introduced by Willys in 1945 followed by Dodge power wagon trucks.

Both of the vehicles were a derivative of their war predecessors. With these companies leading in sales, other competitors from other brands also came up with AWD system cars to fulfil the demands of the market.

In 1991, Bugatti introduced EB110 and it was one of the first supercars to have AWD system. Lamborghini introduced its first all-wheel-drive LM002 off-roader but it was V12 Diablo that used AWD to improve on-road performance. Nowadays, all the Lamborghini models including the famous Aventador SV come fitted with all-wheel drive as standard.

Other big car manufacturers like Nissan, BMW, Ferrari, Porsche and Mercedes also have stepped into making AWD vehicles for both supercars and city cars. Some of the famous cars that come with AWD system are Nissan GT-R, Audi R8, BMW M5, Porsche 912 Spyder, Tesla model You and Toyota RAV4.

The biggest advantage of the AWD system instead of FWD or RWD is superior traction. A two-wheel-drive system does not get enough purchase which might result in a potential accident. An AWD system, however, provides power to all the wheels and even if one starts slipping, the other wheels will compensate for making the drive on slick roads significantly better.

2. No need to Provide Instructions

The fact that you do not need to provide any input or instruction for the AWD system to work seems to be one of the main reason most people are into all-wheel-drive vehicles. The system is constantly active, thanks to its computer-controlled system and because of that, the system provides the necessary power to each wheel whenever lack of traction is detected. Also, the all-wheel-drive system automatically adapts to the road condition to send more or less power to the wheels.

AWD vehicles tend to have better resell value than their two-wheel-drive counterparts. Also, it is relatively easier to sell AWD vehicle than a two-wheel-drive vehicle due to its popular demand which means, if you’re planning to get a new vehicle or just sell your old toy, you’ll get decent cash for your AWD system.

AWD vehicles will accelerate significantly better in slippery roads making them the ideal vehicle for snowy, icy or muddy roads. An AWD provides power to all the wheels which provide improved traction and ultimately better acceleration.

Although the resell value might be better than a two-wheel drive, it is more expensive at the time of initial purchase. The Same vehicle with two different systems can have a price difference of up to $5000. Also, AWD is more expensive to maintain as its more complex than a two-wheel drive. Shoppers considering to buy a used car without the warranty might have to pay a hefty amount if there’s any problem with the vehicle.

In addition to extra cost while buying the vehicle, these AWD systems have significantly low fuel efficiency. Since AWD vehicles are heavier and the engine needs to deliver power to all wheels, they consume four to ten per cent more fuel than their two-wheel-drive counterparts. It might cost you couple hundred dollars more every year on fuel depending on how much you drive.

Most people while deciding to get a new vehicle choose AWD over two-wheel drive without a second thought thinking they have an upper edge while driving in slippery roads. What they don’t know is AWD system will only improve traction to help you accelerate, they have no effect on braking or handling of the car in those slippery conditions. The braking and handling are no different than those of a two-wheel drive.

New and improved technology has been trying to get the performance of an AWD vehicle in a two-wheel drive and even it’s not there yet, it is close. Many two-wheel-drive now has the option of traction and stability control where the driver is capable of providing more power to one wheel and less to another.

If necessary, the driver is also capable of completely cutting power to one wheel to eliminate the possibility of the vehicle going out of control. While on the breaking side, ABS helps a vehicle stop even better which is not limited to AWD vehicles.

So should you get an AWD vehicle? Well, that depends on why you think you need an AWD. If you live in an area with harsh, snowy or rainy climate with slippery roads, probably yes. But if you’re on a tight budget, a two-wheel-drive vehicle with good tires made specifically for slippery roads could also work. But if the place you live in a place with a moderate climate, a two-wheel-drive might get you by and you’ll also be saving up for maintenance.