Talking about the United States of America of the time tough-on-crimes political status of the 1980s packed state prisons, privately owned businesses saw the probable benefit in building and operating remedial facilities.

Today more than a hundred thousand of the 1.5 million imprisoned Americans are kept in private prisons in twenty-nine states and nationwide corrections.

By definition, a private prison, also known as for-profit prison is a place of incarceration where people are imprisoned by the third party/ companies that are contracted by a government agency and not the government itself.

The US has the highest prison population in the world and nearly 2.2 million people in prison. The US government has been relying on private prisons especially for the detention of those who commit civil crimes.

However, there is always an ongoing debate on private prisons versus public prisons. When countries like Japan, Chile, South Africa, Thailand, etc. are trying to embrace the concept of a private prison, several religious groups, political parties and individuals have criticized the use of it.

In this article, let us try to know both the benefits and drawbacks of private prisons.

Many public prison systems are operating at a capacity that is much higher than originally intended which is the major factor that has led to the use of private prisons.

Overcrowding of public prisons creates unhealthy and unsafe environments for the inmates, which doesn’t only put them at risk for diseases and wounds but also impinge on their civil rights. So a reduction in the population in regular prisons helps the government save money on operating costs.

Private prisons can’t function on their own, they must hire a full staff to run the facilities which include medical facilities, cooks, guards, transportation servers, suppliers, administrative support, etc. For-profits prisons can be a source of employment which supports the local economy.

For instance, the private prison system in the United States generates over $89 billion in positive impact each year.

Rehabilitation and integration are created for offenders in private prisons. In a study conducted in Arkansas, it was found that over 659 women were released after they completed a re-entry program.

After five years, only 1 in 5 of the women being held committed another criminal offense. It means that private prisons have the potential to lower the rates of reoffending by up to 50% in some regions. As an industry, a rate of 50% is considered to be an impressive rate.

4. Save Time, Money, the Effort of Government

Regulating prisons can be expensive, time-consuming and labor-intensive and therefore require the government to spend a large number of aids. When the government invests in a private prison, it allows the government to lessen its workload. Since it no longer has to manage a lot of prisons, it can focus its time and workforce on other public and social services.

Judgments that involve the administration of the facility in the public prison may require lots of procedures that could last up to years in some situations. With a private prison, everything runs through the company running the facility instead. That means any policy or procedure changes receive immediate, direct implementation.

Private prisons experience 50% more violence against employees from inmates when compared to the data from public prisons. Private jail facilities hire only some employees. Some officers-to-prisoners ratios in private prisons can exceed 1 officer to 120 inmates. This kind of lower staffing levels and training at private prisons lead to an increase in violence and escapes.

2. Do not House Costly Prisoners

Many private prisons are given the opportunity to pick and choose which prisoners they want to have in the house. They do not choose a high-risk
prisoners because they are expensive to administer.

Since prisoners are required for a private jail to be beneficial, their spending limits(budgets) are rarely 100% certain. To take care of this issue, there are a few examples of associations working with local systems of equity to stretch out sentences to longer lengths or accuse of more significant level wrongdoings for longer sentences.

Ideally, private prisons have lower costs than state-run prisons and can enable the government to reduce its expenses. However, a few instances demonstrated this isn’t generally valid in a few cases.

A few private prisons, for instance, accept only low-rise inmates and return high-risk inmates to state-managed prisons to minimize their expenses and maintain a strategic distance from the obligation of managing risky convicts. This, thusly, implies that the government still needs to manage the expense and bother housing high-risk prisoners. 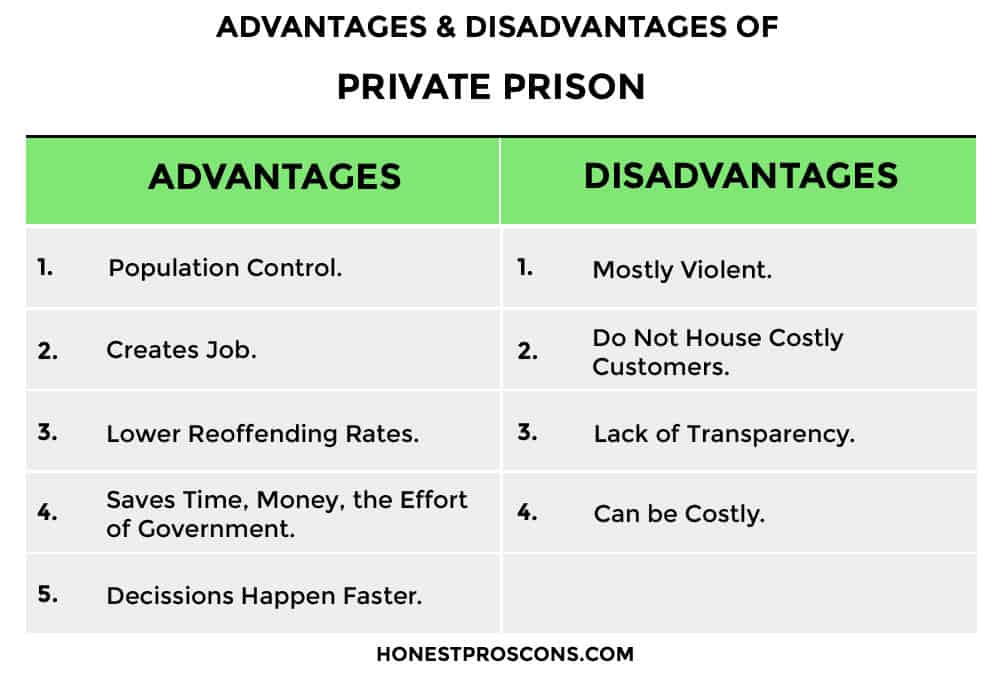 Like everywhere, private prisons have numerous advantages and disadvantages. They benefit when they are used properly. However, they can be abused by those who are in authority. So the government should keep an eye on private prisons.