Gaming consoles have become a major attraction among young and adults. People tend to design their homes considering a gaming zone and have a separate space for gaming. As far as choosing the right gaming console is concerned, Playstation is arguably one of the best in the business.

PlayStation, abbreviated as PS, is a series of gaming consoles developed by Sony Computer Entertainment. PlayStation has five major releases till now. The first PlayStation console was released in Japan in December 1994, which is named PS I. 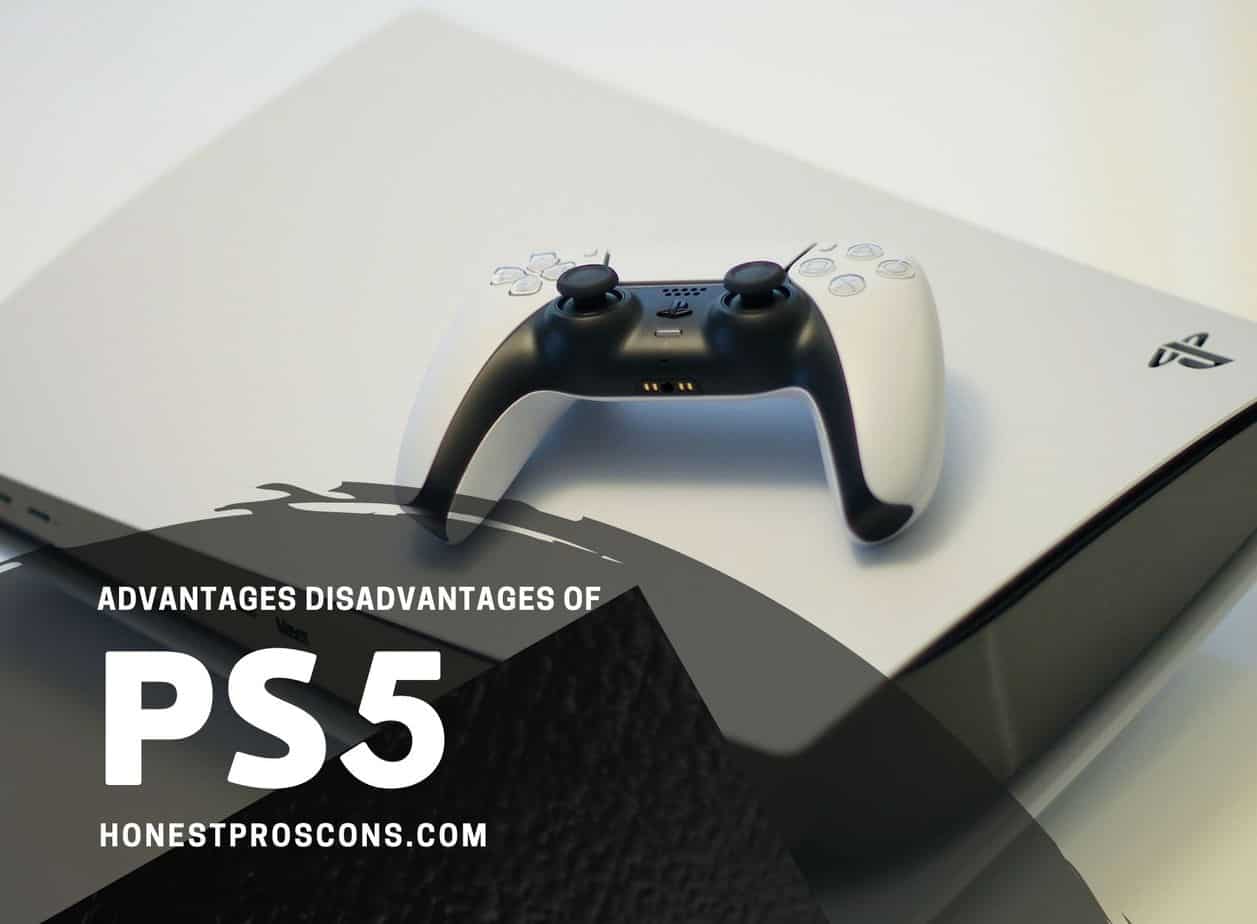 Advantages and Disadvantages of PS5

PS5, PlayStation 5, is the successor of PS4 in the PlayStation series. It is also a home video gaming console, which was announced in 2019 for the first time. PS5 came with some next-level features over the existing PS4 and is likely a significant upgrade from PS4.

It has a whole new design, superior resolution support, faster memory, and SSD support. It has improved gaming performance in every way possible by adding faster memory and storage, a powerful GPU, a next-gen controller, and supports Ultra HD resolution.

The PlayStation 5 is better than PlayStation 4 in every possible way. Sony introduced the PS5 with two variants, standard and digital. So one can have the option between, a traditional disc edition and an entirely digital edition.

The standard edition costs $499, while the digital edition is cheaper and costs $399. With both variants, you will get the same specs like the same faster SSD, the same graphics, the same performance, and many more.

PS5 was released on November 12, 2020, in Australia, Japan, New Zealand, Mexico, Singapore, and South Korea, and in other major markets, it is released a week later.

The PS5 is an excellent gaming console that offers an exciting next-gen gaming experience. The P5 is a super powerful and well-designed gaming console.

The PS5 comes with the most promising technology. Speed, performance, and resolution are the major qualities of the PS5 that are worth praising. With the introduction of SSD in PS5, its performance speed is greatly improved than disk-based consoles.

The custom-built SSD offers drastically reduced load times, delivers a level of performance that wasn’t achievable with the PS4 or other gaming consoles. PS5 has other high-end components like AMD graphics chip, next-gen controller, that are equally accountable for delivering high performance.

PS5 offers to play games in 4K resolution as well at the rate of 120Hz and it also supports 8K resolution as well. The new Tempest Audio Engine in PS5 enhances the sound in games thus offering a realistic 3D audio experience. The combination of performance and speed in PS5 gives the best user experience ever.

The controller in PS5, better known as DualSense Gamepad, is packed with some top-notch features which are likely to improve the gameplay to a great extent. Though the basic layout of the controller is similar to the DualShock 4, however, DualSense has the superior build quality and some added features as well.

The PlayStation 5 DualSense controller will surely give a gaming experience like never before. The company has worked on some specific details and integrated some features like haptic feedback, adaptive triggers, and motion controls on the controller, which gives a more real-time gaming experience and also gives more accuracy.

The microphone is also added to the controller, which allows players to communicate with each other. It has a stylish design and feels great in hands as well. The DualSense Gamepad is undoubtedly a next-gen controller.

The previous versions of PlayStation don’t have SSD as their storage unit, but PS5 introduced a custom SSD feature. It is one of the reasons behind PS5’s high performance. The PS5 comes with a custom SSD, which offers a read bandwidth of 5.5 gigs per second, which is fast in comparison to other gaming consoles.

PS5’s SSD performs read/write operation much faster than the PS4’s hard drive, hence delivers better speed. The game load time is significantly reduced because of the SSD as SSD has a faster read/write time. Game files can be read and presented to the system within a fraction of seconds, hence improving overall performance.

The company stated that more than 99 per cent of games available on PS4 could be playable on PS5. You definitely would not need a PS4 once you get a PS5.

The high-performance capability of PS5 allows you to play almost all PS4 games on your PS5 and would even run better on it.

PS5 is backwards compatible with PS and PSVR, with a few exceptions which will be described later. Games available through PS Now and PS Plus can also be played with PS5.

One of the main reasons to buy PS5 is because of its exclusives, the games which you cannot play anyplace else. It is the biggest advantage of PlayStation over X-box.

God of War, Marvel’s Spider-Man, The Last of Us Part I are some of the exclusives. The transition of these exclusives to PS5 makes them playable on PS5 as well.

There are also exclusive games for PS5 like Deamon’s Soul and Marvel’s Spider-Man: Miles Morales. With PS5, Sony has continued its tradition to deliver exclusives as well.

PS Plus is a subscription service from PlayStation, which will give you access to around 20 games from the PS4 catalogue. The Playstation Plus games also include first-party games like God of War and Bloodborne alongside third-party favourites like Persona 5 and Fallout 4.

PS5 comes with graphical fidelity technology, which advances the resolution of the game to a whole new level.PS5 supports 4K video output at 120 hertz and also 8k resolution. In PS5, Sony significantly increased clock speed as well as the number of computing units.

The PS5’s GPU(Graphical Processing Unit) is around eight times more powerful than that of PS4. The combinations of ultra HD resolution and super graphics gives you the ultimate gaming experience. If you are looking for a real next-gen gaming experience, PlayStation 5 is the best option for you.

Related: Advantages and disadvantages of the PS4

The given storage capacity is likely to fill up quickly. External HDDs or SSDs will offer more flexible options to expand the storage as per our needs, but we can’t store PS5 games or saves them to external storage (HDD or SSD).

PlayStation 5 is the largest among the PlayStation series and the largest gaming console from Sony. It is approximately 15 inches tall, 10 inches deep, and 4 inches wide. With its size keeping in mind, you have to make a lot of space near your TV. Due to its large size, it weighs around 4.5 kilograms.