Affirmative Action is a policy formed by the government in which they help level the playing grounds for those historically disadvantaged due to factors such as race, color, sex, religion or national origin.

It is widely used in fields like education and the workplace mostly. It is recommended to include in different governments’ policies where responsible leaders have to make it a reality.

The History of Affirmative Action

The term “Affirmative Action” was first used/introduced by President John F Kennedy in his Executive Order 10925 in 1961.

In an executive order, he stated that government contractors “take affirmative action to ensure that applicants are employed, and employees are treated well during employment, without regard to their race, color, creed or national origin.

That order further gave prominence to the need for equal opportunity and soon paved its way to higher education admissions.

Most people desire diversity and affirmative action as a policy ensures that diversity is accomplished and maintained in places like universities, schools, workplaces, colleges, etc.

Affirmative Action will help create a tolerant community that will embody a wide range of backgrounds. They will be exposed to nationalities and races that are different than their own and this diversity is less likely to occur without affirmative action.

Several individuals from minority groups put a full stop in the dream of education and career because they think it is almost impossible to achieve because of the minority they belong to.

So policy like affirmative action brings out people to areas of work and study they may never have considered previously despite the aptitudes. For example, even an individual from a minority group can get a chance to get into the Ivy League School.

It is a widely accepted fact that it is harder for a minority group of people to succeed than others because they are generally constrained from privileges that are enjoyed by others. However, they get encouraged to enter an advanced educational system if a policy like affirmative action greatly aid and benefit a group of minorities.

4. Equality in the Workplace

This fact is sad but true that sometimes even having the capabilities as sufficient as another group, minority groups are not given a job opportunity and someone else from another group gets the chance.

A policy like affirmative action will be significant to ensure that the candidates from the minority group will also get the chance to prove themselves and their efficient potentials as the candidate from other races.

When there is an environment where people are dealt with equality, then it can bridge various gaps that are prevalent in our society. Wage gaps have the possibility to go away. Gender gaps can be lessened in certain industries. Minority gap can be reduced due to the equal opportunity provided for each group of people.

6. It Compensates for Societal Loss.

During past times, there were varieties of oppression and slavery, faced by minority groups. They were deprived of basic civil rights. Affirmative action will allow them to reverse back from losses they had from years back.

Hate crime is when someone attacks a person of a minority simply because they are a different race, gender, or sexual orientation.

Though there is no way possible you completely shield someone from hate, Affirmative Action can at least help tremendously by implementing strict and harsh punishments to those who are found guilty of personal assault due to race, gender or sexual orientation.

This law makes many people think twice before committing an act that is filled with hatred or violence to some extent.

If the goal is to eliminate discrimination from society, then many people argue that affirmative policy in society is basically an instance of reverse discrimination. By giving unique treatments to just some people and not other people make racism come to be considerably increasingly predominant.

This may also offer securities to minorities who carry out vicious violations against others.

2. Lessens the Value of Achievement

The objective of a business or an educational institute is to pick the most ideal individuals whenever possible. When affirmative action policies are active in society, at that point the third purpose of emphasis is added to the condition that is diversity.

On the off chance that there is an absence of qualified applicants from the minority group in society, these principles may drive an organization to acquire somebody who isn’t equipped for the position of the program on account of what the law demands.

4. Suggests People That a Minority Group Need Such Policies


Giving one group of individuals particular treatment conveys them that they’re sufficiently bad to make progress without anyone else’s input.

This recommendation can be humiliating because the shade of an individual’s skin or their way of life isn’t an impression of their general knowledge, aptitudes or capabilities.

It may even cause more division in society because guidelines tell the majority that they are superior people.

5. There Can be a Flaw in Diversity

Just having individuals of various races or ethnicities in the work environment/ college doesn’t really mean diversity of opinion. Even individuals with similar skin color are not really equivalent in opinion or even culture.

Once enacted, affirmative actions are tough to remove, even after the underlying discrimination has been eliminated. Diversity is desirable and won’t always occur if left to chance. 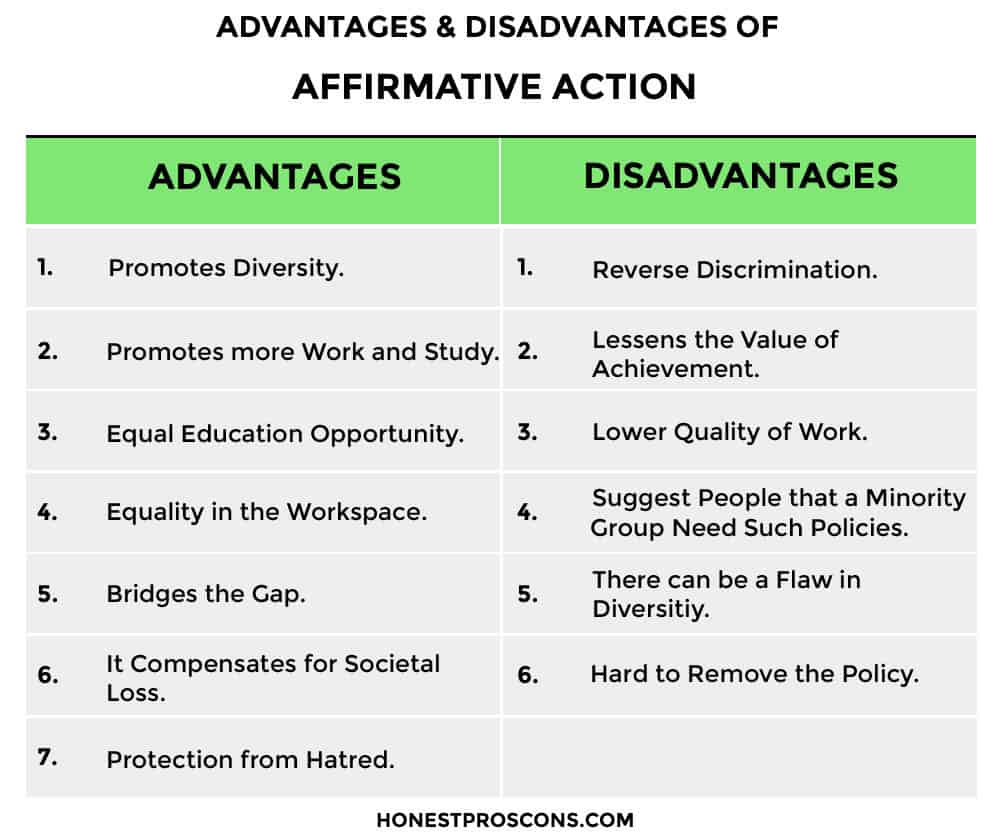 The advantages and disadvantages of affirmative action will continue to be an issue to debate upon. It is legitimate and can increase the number of minorities in programs and positions, but there is no guarantee that these policies will help people make a better life for themselves.