The use and craze of mobile phones in today’s world are increasing every day. It is used for various purposes like entertainment, gaming, education, etc., and is not only limited to communication.

One needs to have a mobile phone to be up to date with the real world. Buying a phone is also a great deal of work. In the Android phone world, Motorola is a well-established name. It is the producer of the best android phones in the market and is well known for budget smartphones.

Advantages and Disadvantages of Motorola Smartphones 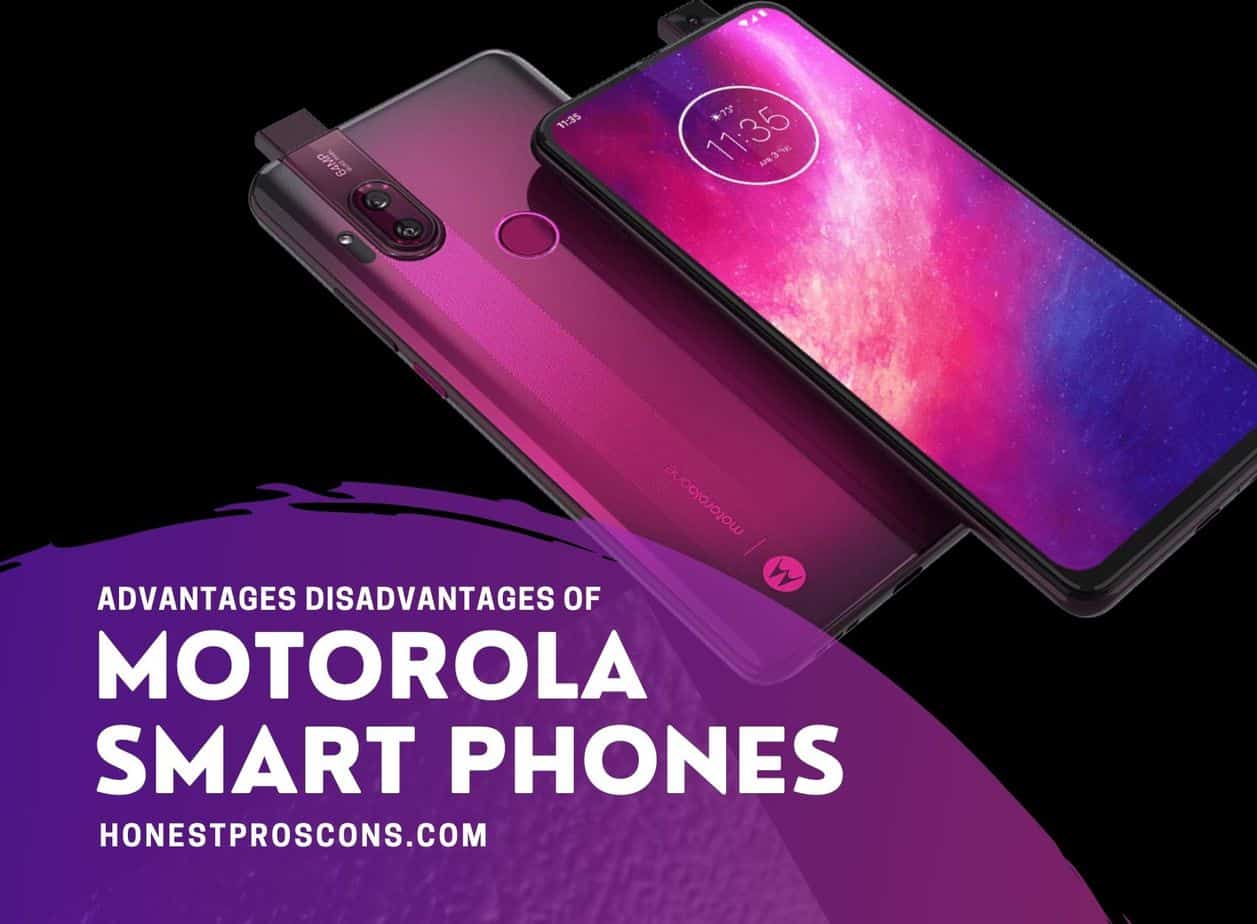 Motorola is an American multinational telecommunication company founded in the late 1920s. At that time, Motorola used to make radios and helped a lot in WW II through radio communication. It also manufactured television, semiconductor, microprocessors, and semiconductors, etc.

Motorola illustrated the first hand-held portable telephone in 1971. The company released a cellular-communication device for commercial purposes for the first time in history. After that, Motorola released many cellular phones and pagers.

Motorola was the world’s biggest seller of mobile phone handsets during the 1990s. Motorola also developed the world’s first GPRS cell phone. Motorola Razr is among the top sold mobile phones having around 130 million sales.

Droid is the first android phone from the company which was released in 2009. Then in 2011, it released Atrix with a dual-core processor and 1 GB RAM for the first time. In 2013 Motorola released their Moto series under Google mentorship. Lenovo acquired Motorola in 2014 and is continuously releasing great smartphones each year

Pros and Cons of Motorola Smartphones

Motorola offers one of the best Android phones in the market. If you are planning to buy an Android phone then, Motorola is the brand worth considering. Before purchasing a phone, one must know particular brands’ strong and weak points. Following are some pros and cons of Motorola phones,

Almost all Motorola phones come with stock Android in it, which is the pure form of Android with little/negligible customization from the phone company. However, most of the other Android phones come with customized versions of Android made by the respective companies.

Stock Android has various benefits over a customized one. Stock android is faster and gives better performance than customized Android even on a lower spec phone.

Stock Android and hence provides a great user experience. It also guarantees early updates of new versions of the operating system. Also, customized Android comes with build-in apps from the phone company, and removing those unnecessary apps is a headache.

Some apps are not allowed to uninstall and hence eat up space and memory of the phone, which in turn slows downs the phone’s performance.

Motorola makes the best budget phone and is widely known for it. Motorola is also known as the champion of the budget smartphone market. Motorola always tries to offer mid-range level specs at the cost of budget phones.

In 2013, Motorola released Moto G for just 170. There are various other Motorola phones at a budget price with great specs. Motorola offers a phone for every price range, from cheapest to pretty expensive.

The build quality of Motorola phones is high-end and is considerably better than are the others at the same price point. The display on the Motorola phone is pretty smooth. It will give you the smoothest touch experience ever.

They offer various mind-blowing designs as well. The company does not compromise on the build quality that is why Motorola phones are more durable than other smartphones.

Apart from Android features, Moto has some added features that make Motorola phones even better. Motorola has grouped some useful apps into a place aptly names Moto. Moto Voice is a custom feature that allows users to interact with their phones using voice commands.

Another feature is Moto Display, which displays a notification on a locked screen without waking the phone. It helps to save battery power. Moto Assist is another useful feature that works as a great assistant. For example: if you are driving using GPS, it detects the driving mode and plays music if mobile connected to vehicles or read out incoming calls.

This feature is of great help in times of meeting or events. Meeting mode uses your calendar to track the upcoming events and puts your phone into vibrate or silent mode in those situations.

Motorola is also known for its amazing camera. The camera hardware they use is high-end and gives the best camera experience. Not only the camera but the sound technology on the Motorola phone is also great.

The latest model uses the most advanced processor, top-notch camera setup, magnificent display, and super great hardware to offer the best performance. Its flagship and premium phones are dust and water-resistant. They come with wireless charging as well.

1. Not Amongst the Best

When it comes to the best phone in the market, Motorola has not much to offer in comparison to other competitors. Its flagship phones and some premium models have failed to do the magic.

Best phone means perfect in every way from processing power to camera feature to build quality to designs. Other companies like Apple, Samsung, and Huawei’s flagship phones always offer something new and more advanced.

It helps to attract customers. But Motorola has a hard time doing so and could not able to deliver the best.

Motorola phones usually do not have eye-catching designs, which is one of the drawbacks of them. Usually, the customer pays more attention to the design than specs. Phones design plays a significant role in its popularity and success.

It is the reason why Motorola’s market is gradually declining every year. Most of their phones have dull designs and are not fashionable. The flagship phones from the company also don’t have such great designs.

3. Not So Great at Flagship

To survive in the tough competition, a phone company must provide great flagship phones from time to time.

In the beginning days, Motorola was a huge success because of its low-budget phones and their amazing specs. However, in recent years, Motorola is losing its market value as well as its market share.

It might sound unreal, but people prefer to stick to a brand that has a higher brand value. For example, Apple, Samsung, Huawei has a higher market value in comparison to Motorola, and hence peoples are more likely to buy those phones.

If you are planning to buy a phone, doing proper research is most crucial. An ideal phone must have a good design, must deliver good performance, and have a decent battery life to endure the whole day. Motorola smartphones provide better features than other phones in the budget range.

The use of near-stock Android gives the best user experience than any other company. Motorola phones have the excellent build quality and top-notch hardware as well. If you are looking for a budget phone with great features and are sick of customized Android, then Motorola probably is the perfect brand for you.