With the progress of the technological world, every significant development in mobile communications brought about a new generation of networks, each one better than the other.

It started with the First Generation(1G) mobile network that allowed the user to make phone calls only. This technology continued until the Second Generation(2G) mobile network replaced it in 1991. Similarly, 3G networks, 4G networks and now, 5G came along with their technology of the internet and revolutionized the capabilities of a cell phone.

Pros and Cons of 5G Technology

Looking at the ever-expanding possibilities of a smartphone, there is no denying that mobile phones are changing the way we live. As more people are dragged into the world of the internet, the popularity of streaming videos has skyrocketed. Due to this increase, spectrum bands used by the currently prevalent 4G networks are becoming congested, leading to server crashes.

This calls for the need of an enhanced mobile broadband connection. Thus, we have 5G network technology which elevates today’s mobile broadband services to interconnect, not just people, but also machines, devices, and objects. 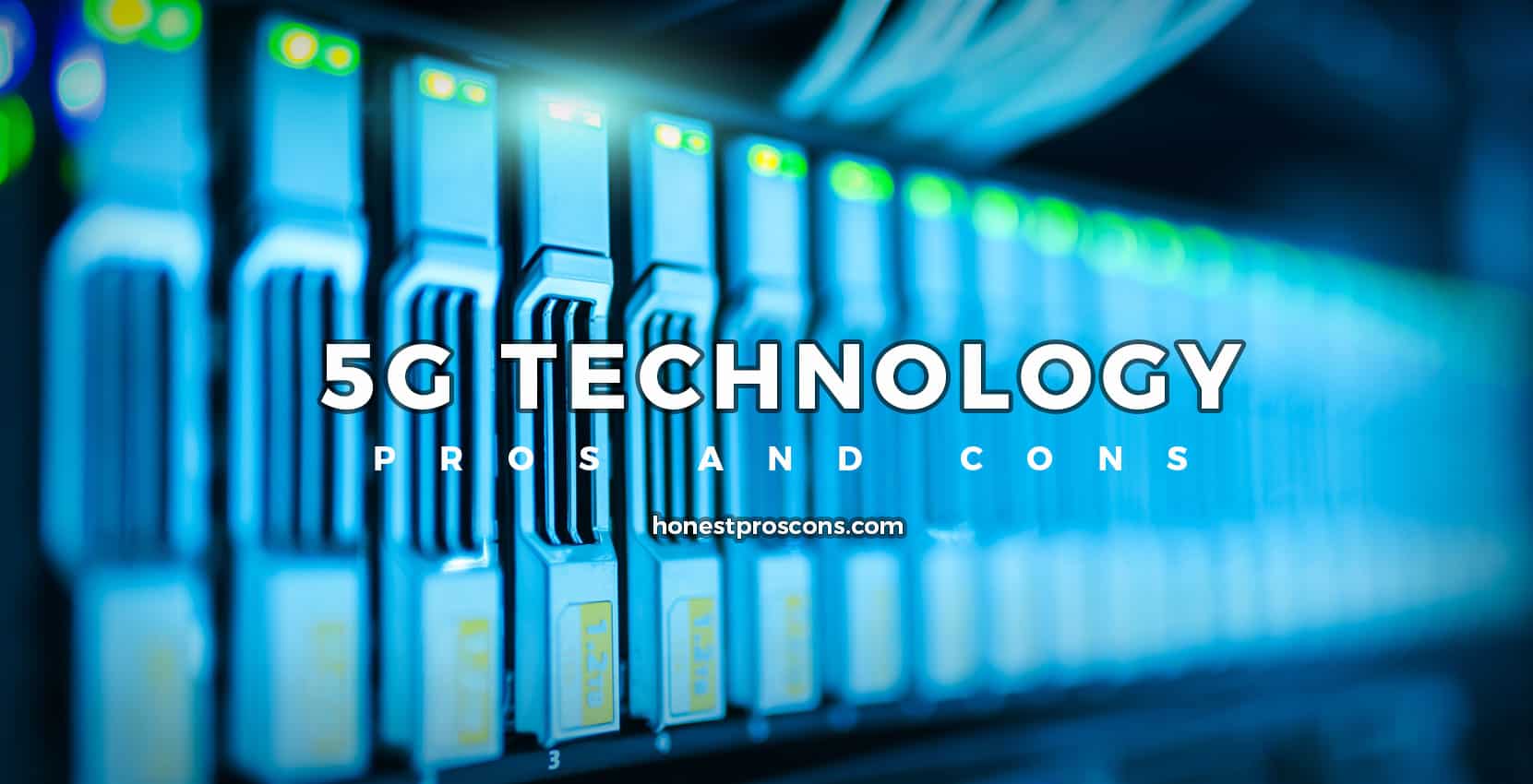 Apart from mobile operator networks, 5G is also likely to be widely used for private networks with applications in industrial enterprise networking, IoT, and critical communications.

Along with the existing LTE frequency range, the 5G network spectrum also includes the millimeter-wave band. This network using a high spectrum paired with an advanced radio technology is expected to be 100 times faster than the Fourth Generation (4G) networks with transmission speed up to 10 Gbps.

This inevitably leads to faster transmission of images and videos. A high-resolution video that would normally take a long time to download can now be done in the blink of an eye using the 5G technology.

Latency refers to the time interval between an order being received and the given instruction being executed.

In 5G technology, the delay time is around 4-5 millisecond(ms) and can be reduced to 1 ms, i.e, 10 times less than the latency of 4G technology. This makes it possible for us to watch high – speed virtual reality videos with no interruptions.

Due to this particular feature of 5G technology, it can be extremely helpful in fields other than IT, like medicine and construction fields.

Since the 5G network uses more spectrum, it allows connection with a greater number of devices, a 100 times increase in traffic capacity, to be precise. This enables more people and more devices to communicate with each other simultaneously.

This increases the chances of the establishment of smart cities, that regulate themselves using various sensor connections.

Autonomous vehicles are also expected to be developed using this feature. These vehicles are to be connected to each other, exchanging information (their speed, distance from each other, etc). Looking at the number of lives lost to car accidents every year, this invention can, quite literally, be a life-saver.

It was widely feared that the significant increase in data speed and connectivity would bring about equally large energy consumption. However, the 5G network aims to decrease energy consumption by 10 percent as compared to the presently common 4G networks.

Their new protocols to decrease power consumption reduces data traffic and increases the time period for the base stations to be in sleep mode, increasing the overall network efficiency.

Its greater transmission speed, lower latency, and broad connectivity have a lot to provide in the world of business enterprises.

With the capacity of being able to support up to one million devices per square kilometer, 5G technology allows enterprises to coordinate all the devices under their control with infinite efficiency.

It is close to impossible to create a completely flawless technology. When it is about 5G technology, it is comparatively new in the field of communication. There are some disadvantages of 5G at this stage. Here are some of the cons of 5G technology:

Introducing 5G technology to the world demands the replacement of existing mobile infrastructures that are not compatible with 5G technology. This inevitably leads to increased consumption of time and money.

Due to its intricate nature, it demands a large number of skilled workers to maintain a proper connection, adding up to the cost factor.

5G technology is still in its developing phases and there is a lot left to be discovered. Like how marble is carved to form detailed statues, 5G technology still requires specialists to work on its features before a polished, proper plan is formed.

The level of infrastructural development demands its establishment has also not been achieved so far.

As a result of an increase in bandwidth in 5G networks, the total coverage provided by each cell decreased. Hence, cellulars used by 5G technology travels a shorter distance than those used by 4G technology, ultimately reducing the area covered by an individual 5G cell tower.

Also, millimeter waves, generally, have very low penetrating power and cannot pass through buildings, trees, walls or other barriers without the signal being disrupted.

The radio spectrum already crowded due to the presence of 3G and 4G cells becomes even more congested with the addition of 5G cells.

Also, the extended range of frequency of 5G network is 6 GHz, which is already jam-packed with other signals. This hints towards a problem that may arise due to congested radiofrequency.

A research team from the University of Lorraine and the University of Dundee conducted a study on 5G Authentication and concluded that it increases security threats. This is mainly due to its feature of allowing the transfer of high-quality data and the presence of more entry points for attackers.

In a world that is going mobile, a threat to the integrity of the network will ultimately become an issue of national concern.

Taking all the points listed above into consideration, it is quite clear that 5G technology is still under progress, overcoming obstacles, improving and enhancing itself to suit human requirements, and formulating better plans for its establishment and utilization.

Though it has its fair share of advantages and disadvantages at the present moment, it is expected that the advantages will outweigh the drawbacks in the coming future. 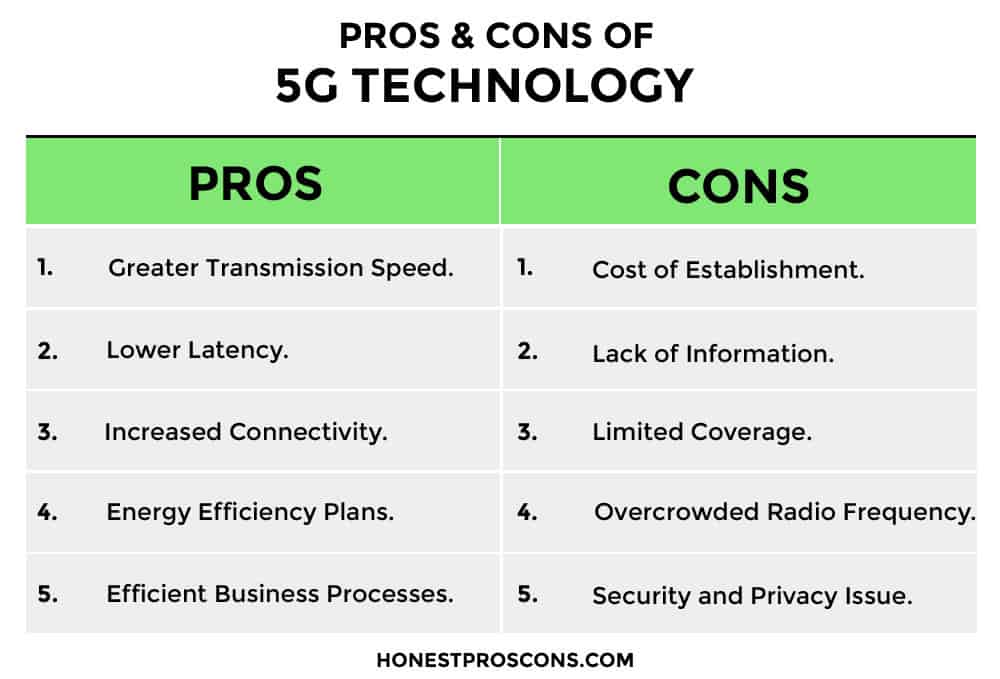