Beam bridge is the oldest and the simplest type of bridge. It is also known as a girder bridge or stringer bridge. It generally consists of one or more spans which are supported by an abutment or pier at each end. 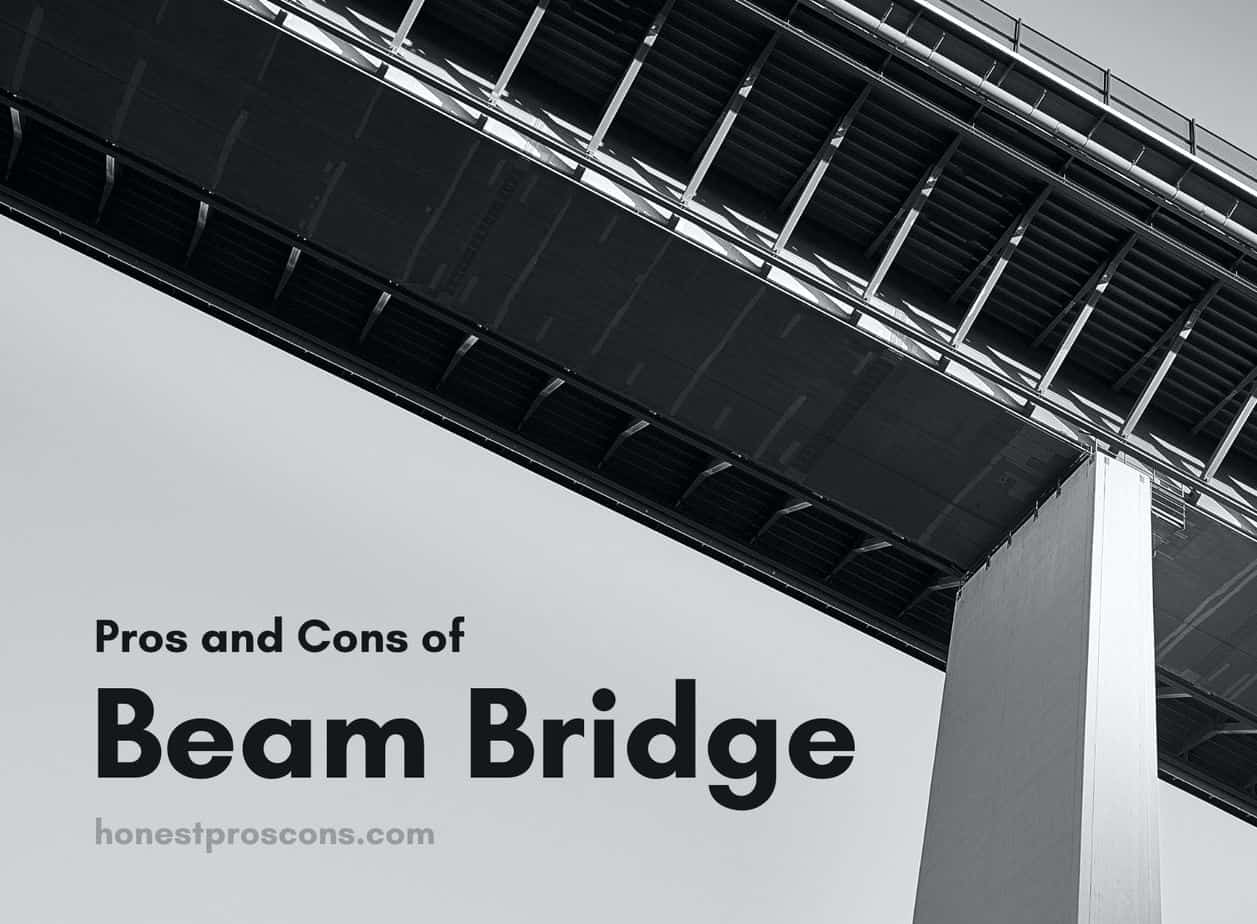 In the past, they may have taken the form of a log across a stream but today, they are more familiar to us as large box steel girder bridges. Various kinds of material can be used to build a beam bridge, like wooden planks, stone slabs, reinforced concrete, or steel.

Beam Bridge consists of a rigid horizontal structure (a beam) and two supports, one at each end, to rest it on. These components directly support the downward weight of the bridge and any traffic traveling over it. If two or more beams are joined rigidly together over supports, the bridge becomes continuous.

A beam bridge needs to be stiff. It needs to resist twisting and bending under load. Normally, the deck of a beam bridge is made of reinforced concrete or metal.

The size of the beam, and in particular the height of the beam, controls the distance that the beam can span. Wide flange rolled form beam bridges are normally the most cost-effective type of beam construction that is used for beam bridges with short spans.

There are lots of different types of beam bridges. Types of construction could include having many beams side by side with a deck across the top of them, to the main beam either side supporting a deck between them. The main beams could be I-beams (also known as H-beams), trusses, or box girders.

Many criticize their structure, while others praise their simplicity and aesthetics. Let’s go through some pros and cons of beam bridges.

Beam bridges design is considered to be of the simplest designs of all types of bridges. The simplest type of Beam Bridge merely consists of one very long beam that is supported at either end with a pier. Extended bridges using this design may use multiple piers to support the weight of the passenger traffic that occurs above.

Beam bridge is one of the most affordable bridge-building options that are available today. It is a great way to save valuable money on the construction of important infrastructure along with design simplicity.

When you need to connect one spot to another throughout any type, this advantage tends to be why it is the first choice considered by most communities. These bridges can provide a useful alternative to arch and suspension bridges. A beam bridge is considered for areas that are cash poor, more widely used in urban and rural areas.


The beam bridge usually doesn’t take much time to construct in comparison to other types of bridges. Since most beam bridges today are a combination of steel and reinforced concrete, a building project does not take long to complete. But it also depends on the size and the location of the project. In rural areas where transportation of material is the major problem might increase construction time.

4. Useful in Almost any Location

If you encounter a bridge while walking along a nature path, there is a greater chance of being a beam bridge. Although you will find that some beam bridges work better than others because of their placement location, this design is useful in a variety of situations.

It is the most common bridge used in highway and railroads. In highways, it can quickly and effectively provide enough support and offering room for traffic to flow beneath at the same time. From walking trails to interstates, this bridge design is proven to be effective.

Beam bridges consist of one very long beam that is supported at either end with a pier. Most beam bridges use a side-by-side beam design that permits a deck to rest on top of the supports.

You would have the piers, then the underneath supports, and then the deck. This placement works well with its simplicity to create a bridge that works almost anywhere. Designers can use H-beams, girders, or trusses to manage the horizontal stresses that the structure will encounter over time.


1. Limitation of the Length of the Bridge


Beam bridges are often only used for relatively short distances because, unlike truss bridges, they have no built-in supports. Since the supports for a beam bridge are typically very far apart, it can be difficult for the bridge to maintain its structural integrity over the long haul.

With current technologies, a single span can handle about 100 meters of length for modern weight requirements. Anything longer than that will require additional spans, which can be linked together as needed to form a longer bridge.

Sagging is a common problem with the beam bridge. The bridge’s loads will cause a downward pulling effect. This effect becomes more and more pronounced as weight is added to the bridge’s load.

Because there is no weight transfer occurring on the supporting structures of a beam bridge, repetitive heavy weight on a specific location can cause the bridge to begin to sag. That is why you will see some weight limits posted on small bridges in rural communities.

The standard beam bridge looks a little like a table. You have the deck on top, the supports below, and piers that work to support the weight. By many, they are thought of as the most boring of all bridge designs. Simplicity and cost-effective construction may be an advantage, however most of the time, it is not aesthetically pleasing. There is nothing architecturally fascinating about this design since it looks like any other roadway.

4. Gets Weaken Over Time

Most beam bridges have an average lifespan of 50 years or less. Beam bridges eventually wear out over time from the wear and tear of supporting the weight from the deck. Even when you use reinforced concrete and steel for the bridge, a span that receives heavy traffic might have a rated lifespan of just 25 years. At some point, however, beam bridges will need to be replaced.

Beam bridges may be the cheapest design to build from an average standpoint. However, it can be expensive, even for short spans.

A cheap material for beam bridges is concrete. However, concrete on its own is not strong enough to stand up to high forces of tension (pulling). Concrete needs to be reinforced with expensive steel mesh that increases the cost of construction.