Democracy is the government system that is assigned by the people themselves, where they get the chance to choose whom they want to be ruled by. 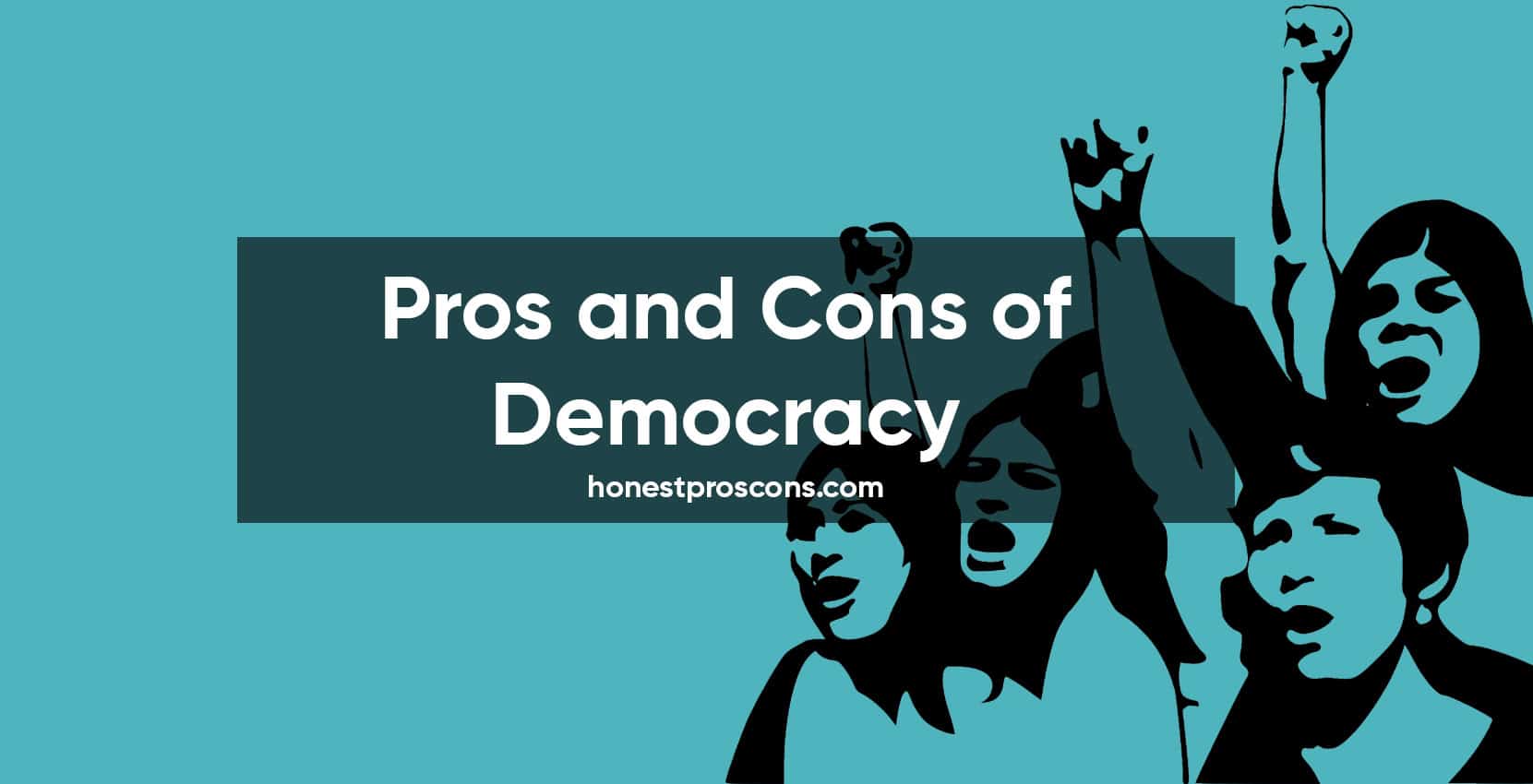 Eligible candidates take their stand and represent their party to fulfill the people’s needs. It is one of the fairest ways to establish a good government where each person has the power to elect their representative, who is going to work in favor of society and for them.

Here are some pros and cons of democracy.

The public is at power in a democracy, their right to vote decides the fate of the country/community. They can vote for the right candidates with the right policies and against the other.

Whatever the result maybe they can express their personal opinion through voting. This process allows each community to work for their own benefit, if the system did not earn any faith then they can easily change the governing body in the next election.

The structure of democracy bring all the communities and people together and build a society in a beneficial way for almost everyone.

During the election campaign, all the political candidates address the public, regarding their requirements and problems and assure them that there is for people and all those problems will vanish if they form a government.

These are the issues and dedication the public wants and votes for, as soon as they are elected, a more responsible government can be expected. As the government is ruled and conducted with a sense of dedication and people under this system discuss matters and problems thoroughly to come up with sensible decisions.

The visible difference in a democracy that makes it better than other government structures is when the government of the leader changes it allows a smooth transition. There are no arguments, delay, or violence involved as it is done by the public and even within parties the same thing goes with the successor of the leaders.

Democracy uses voting as an important tool to avoid violence and conflict. It also gives the flexibility to change policies like some rules or update some issues in the constitution, and that is also done by the majority of voting in parliament. Any changes required can be easily handled by the government.

Democracy provides equality as well as prevent one person from hurting another, this freedom is structure give an opportunity to look for different and new employment and educational opportunities or even places to live.

This encourages people to think out of the box or follow their passion bringing down all the barriers, which will definitely increase productivity, working, and earning citizens. Thus the economic growth of the country keeps on rising increasing the working citizens.

Democracy promotes equality in society and has laws that maintain peace too. These laws are applied to every citizen of the country whatever his power and status in society.

Every culprit is treated equally in the court and the person who sits in the judge’s chair is given full power to decide who is the culprit observing the case and evidence provided to him. Whoever the culprit may be policemen to high political leaders to burglar all are treated the same in democracy.

This is the greatest advantage that maintains faith over democracy for the people causes whatever the countries status or situation. They can get justice once they go to court may it be against the government too.

It doesn’t invoke violence, cause all the members of parliament, government, as well as parties, are voted by the public. They believed them to work in favor of community and country and maintain peace. So, extremism is not an option for the parties as they are responsible for whatever situation occurs to be during the crisis.

Thus encouraging negotiating, discussing, and voting to solve the issues is popular in democracy.

In the last 50 years, there have been fewer conflicts between two nations than at any other time in history, keeping aside a coup within a nation and internal warfare or rebellion in society.

Democracy not only represents the political party or individual leaders concept but the nation and the people in it. As the stats suggest, there are democracies in 167 countries and 164 are UN members. The stats show how it is possible to maintain or eliminate any conflict leading to war between countries.

UN helps countries in any sort of political, natural, or social crisis, and even to be the member countries parliament decides by voting. Thus disregarding and solving conflicts and preventing warfare in favor of the citizen and the country.

Democracy can create an ideal environment for personality improvement, character cultivation, and good habits. As experts say, the political system functions as the school for producing good citizens, where individuals learn about their rights and duties from birth to death, not written in books but facing in society.

As per their voting power, it makes them feel responsible for certain decisions and laws they have, which makes them feel like an active part of society. Giving power to the people and making them involved definitely will make an impact on the country as a whole.

This process helps people form relationships with their communities, which is how patriotism and loyalty initially form.

Democracy treats every citizen equally. It provides people the right to experience and enjoy equal political, social, and economic rights whatever their social status, gender, religion, or property appears to be.

Every citizen has the right to vote, even in the prison the vote is held and those votes are accounted for, it’s a perfect example to understand equality in voting, as culprits are given the same rights as the citizens. The person with the legal document can vote, or take a candidate’s ticket, or even can open a party they don’t need power like other established political parties.

If a candidate can gain faith and belief in their people, they can open any party with at least members they can. Democracy has provided such flexibility where even a teacher to the taxi driver to shoe polisher in the street can vote and can be prime minister.

Many people are unknown about the voting process they just know to go and cast a vote. People should know the importance of their vote, they should know about the candidates and why to vote on that ballot.

It is very important for people to have knowledge about it. Due to lack of knowledge, the wrong candidate will be chosen and they need to suffer his whole term.

The con of democracy is mob rule, political parties keep the mob on their side. Each party will have one group on their side during the election to make some interference or force voters vote for them.

Having the backhand of political parties gives them the privilege to do many crimes in the future too. Mob once hired by the party himself cannot make them go away as party members were also invisibly connected in the crime. Mob’s criminal activities and their illegal works are sanctioned and protected which is harmful to society and the country.

When some big changes are to be implemented or changed then it will be decided only by voting as per the democratic structure suggests. The process requires time, if they have to collect more votes then this change might take years to be applied.

If the declaration is made by the majority then it’s fine else it takes a long time to be sanctioned. So, the important and beneficial decision might take time to be applied in democracy.

The worst disadvantage of democracy is to divide and rule games. If some major incident is to be done or some events have to interfere with the division between people based on religion, race, and languages are done. Mainly during elections time to divide the votes, many of these incidents appear.

When politicians have to do some unfair business these types of policies are applied to make their work done behind the scenes and quietly. When people will be talking about the other big issues these illegal activities are going on in the background.

This is used as a distraction in many major events.

5. People Think Of Self First

The disadvantage that hampers both the country and society is the citizen being compromised. People tend to vote based on their interest or favor rather than voting for the right candidate and a better future.

Election basically means individual right no one can force them but people should be aware of their power, when people vote according to personal interest, it creates discrimination in a society where the majority suppresses a minority. They vote based on how their account, taxes, or overall cost of living is being affected.

Every leader wants to rule the country and party in their lifetime. They will be having these types of conversations between themselves and their egos come face to face. If they need the decision in their favor they spend lots of money on social work, and when they reach that position, they think about balancing their account with the money under the table.

This corruption is the worst thing democracy gave birth to, at least it used to be hidden but nowadays there’s no shame in taking it in front. This misuses public funds and all works are done on the basis of money than rich discriminate against the poor. The victims will always be poor.

7. No Value Of Promises

There is no ethics in democracy and politics. When you can get your goal just by using mere words without fulfilling those promises, then you’ll see more lies than truth. The politician uses emotional manipulation as the weakness of the particular area and gives the speech as the change is theirs when they win the election.

Once they reach there they do not only ignore those policies they offered but they won’t go back until the next election comes. But the people have to suffer until his term finishes and wait for the next election.

Once in power, a politician always wants to be in power, the worth they have earn increases the greed within them. This manipulates what they started their career with and what they have become.

The status he gains in society, among family and friends, mostly his attitude during his term makes him crave the position for a long time, and whatever the post might be he wants to have it and just to enjoy the luxury. 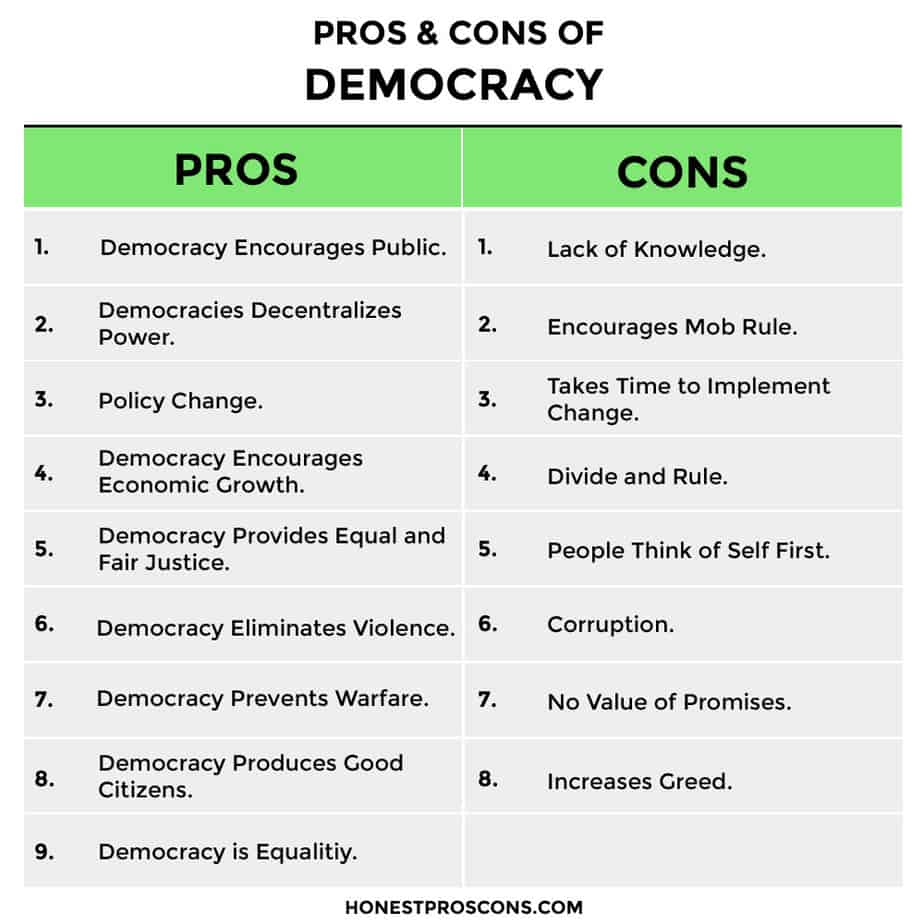