The designer baby itself defines what it stands for. They will have a specific genetic makeup as per their parent’s choice, no room for any changes to occur. 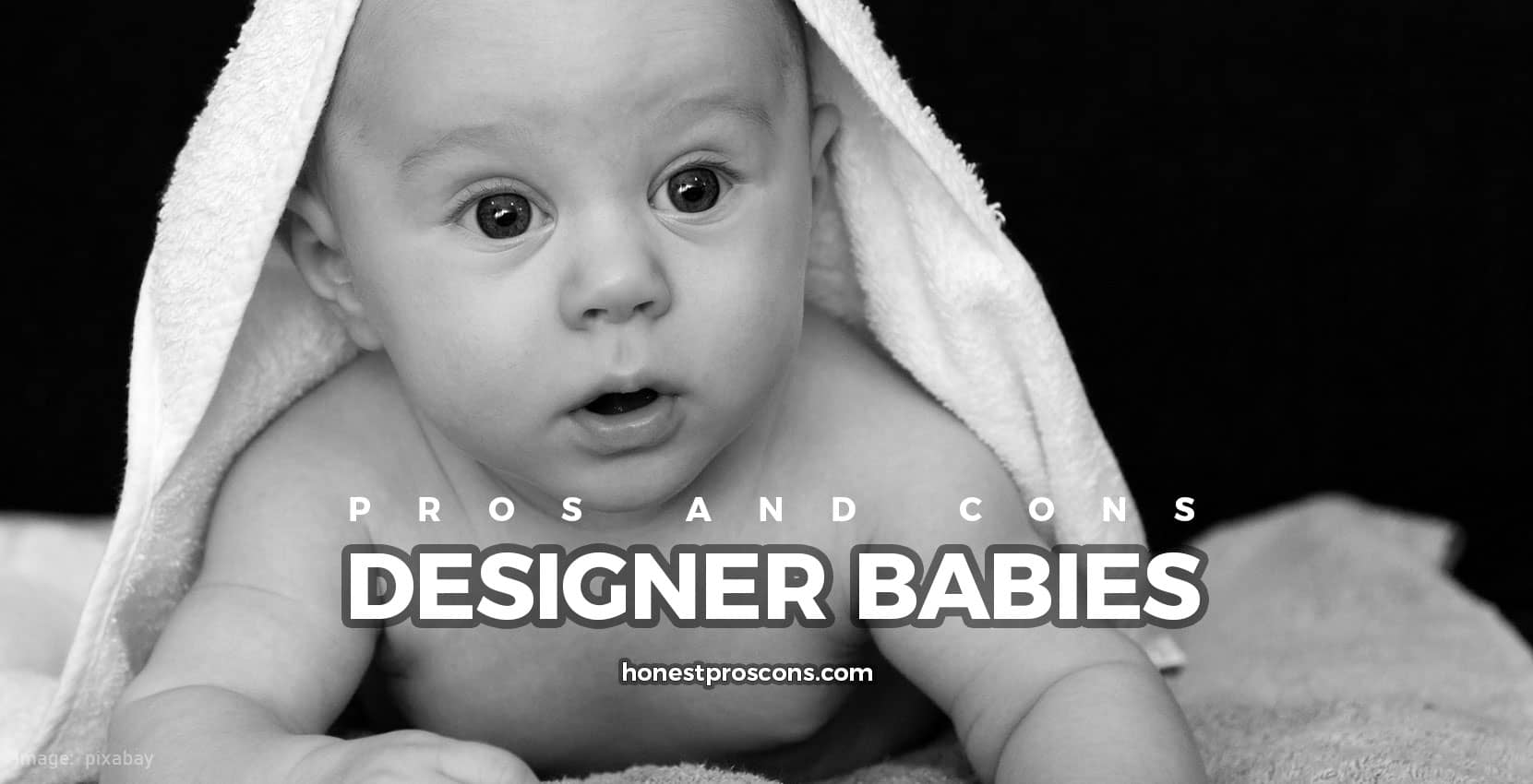 This genetic manipulation is the process of assembling the characteristics and physical appearance of the newborn, which truly justifies its name “designer baby”.

The parents and doctors can genetically screen embryos for any genetic disorders. In vitro, the fertilization of egg and sperm is done in a test tube outside the mother’s body, which allows doctors to screen the embryos. Now they can screen and eliminate genes associated with defects and illnesses.

Hence, considering all these properties and facts about the designer baby. It has a positive aspect but also coming to a negative impact on the future of mankind.

This might ignite social conflict and indifferences all around the world. They are still in the experimental stage and should not be available for the public.

The first savior child or the designer baby was Adam Nash born in 2000. He was created to cure the disease of his sister who was suffering from “Fanico’s Anemia”. As we know the savior child has to go through many medical procedures, that shows how cruel and selfish the world is. Some advantages and disadvantages of human cloning are described below for better understanding.

It carries the possibility of changing the gender, physical appearance, level of intelligence, personality, and health of the child. The designer babies are designed to cure and find the cure for the many epidemics and disorders. From diabetes to psychological conditions, genetic engineering can make the changes at the level of genes and chromosomes which will ensure that babies are healthy, strong and free of diseases. Here are some advantages of the designer babies stated below.

Designer baby can be immune to many of the diseases depending on the approach of treatment. This not only helps the child to fight against the disease but also reduces the genetically transferred disorder to the siblings and generation to come. They can create the vaccine experimenting on the designer baby for the right composition.

Adam Nash the first designer baby who saved the life of his sister suffering from Fanconi’s anemia, which he would inherit if born naturally. The blood cell from his umbilical cord was transplanted to his sister’s body, saving her from the disease. This is the most vital advantage of designer babies which proves it’s worth it.

Parents Can Choose the Child’s Attributes

Parents are given the chance to enhance the characteristics of their babies. This advantage of designer baby is quiet amazing and surprising. The option to bear a child without being pregnant was there but the more advance innovation of genetic engineering is to choose the skin color, facial attribute, height even intelligence of the baby that is to be born.

The inheritable diseases and disorders can be prevented from being passed on to future generations by the alteration of an individual’s genome which carries hereditary information. The genetic screening process is carried out before implanting the embryo into the mother’s womb. When these genes are being screened only the healthy ones are implanted and the defected ones are rejected. This advantage of a designer baby guarantees a healthy baby.

The advantage of the designer baby is it produces healthy and long-living babies. As the defected genes are already removed nad its medical conditions also being good, the baby will grow healthy and live long. This will increase the life expectancy of an individual.

New Inventions in the Scientific Field

As we know humans are the greatest invention of the creator. We may close the gap of understanding between the creator and the human as we succeed in making perfect genetic babies through genetic engineering. These techniques could be used to help improve the health of plants and animals as well. It would become possible to create food resources that improve health by reinforcing the wellness of each structure.

A Better Understanding of Genetic Engineering

The advantage of the designer baby helps understanding more about genetic engineering. Most of the experiments are still on the verge of success. The creation of a designer baby widens and deepens the field of genetic engineering. It opened the new vast door in the concept and theory of biotechnology. If the scientist gains a knowledge of why and how the diseases are transferred from generation to another, then there would be the end of genetic diseases or disorders.

Helpful for an Organ Transplant

Many people are dying in the world waiting for the organ to be transplanted. Over 100,000 people are waiting for the kidney to be transplanted and some for heart and liver. Creating the designer baby with the same genetic profile would make it easier to find matches. With the collaboration of therapeutic cloning and genetic manipulation, organs with an exact match for the individual could be created minimizing the chances of rejection.

We know how most of the handicapped children are treated nowadays. They are already depressed and convinced that they cannot achieve much in this competitive and ruthless world. But the advantage of a designer baby help to alter the gene of the baby and make him able, clever, smarter and stronger. This could even help regarding better knowledge about the prevention of discrimination and the benefit of people with disabilities.

The purpose and the morality of the designer baby itself are questionable which makes it hard to be accepted. As well as many other experiments are going to get the perfect result, so its success rate is not 100%. Many other disorders and diseases might occur resulting in the banishment of the generation. Here are some disadvantages of a designer baby.

Not Safe At Times

The major disadvantage of designer babies is the risk factor being high as it’s still in the stage of experiment. It includes changing and altering the genome information, whose consequences are unknown until it occurs. It could prevent one disease but not guaranteed that it would not cause another. There are concerns of premature birth, stillbirth or unthinkable results for parents involved caused by genetic editing.

The disadvantage of designer babies includes genetic diversity. When the generation of designer babies are grown, more individuals will have the same set of genes. This could lead to a lack of variation in the gene pool. As a result of which the new generation will be exposed and vulnerable to various disorders and diseases.

Violates the Rights of the Babies

This can be considered the violation of the human rights where not only the right but the internal characteristics of an individual is changed. A baby will not even know how and why their body cells are being altered or used. Even if it is done for the good cause, it’s unfair to use the baby as a commodity.

Already the society is divided by races and economic status but designer baby and non-designer baby situation are serious. One way or another genetically engineered or naturally born both may claim the supremacy. Even the relation of the blood would matter no more. This disadvantage of the designer baby could invite the social conflict which never ends well.

The ethical and moral issue is the most questioned disadvantage of the designer baby in many places around the world. Parents aborting the child cause they didn’t meet their requirements or the alteration was not satisfying for them.

Some even do this to earn by selling the stem cell and no strings attached to the baby. After the cells are extracted they keep them till the time they need, just to get stem cell or let the organ’s tissues develop and destroy once the purpose is fulfilled which is so inhumane.

The genetically crafted procedure which alters the properties of the genome might backfire as the gene might be multi-tasking. Such as brilliance and depression, the meaning baby could be a brilliant student but might be a loner. In such a way, if the gene for survival is tampered then the more serious issues and disorder may arise.

Here comes last but not the least one, the socioeconomic division is also one of the important disadvantages of designer baby. It’s too expensive for the common public to go through the procedure and spent that amount of cash.

It might cost around $40,000, and it’s not a small amount. This also makes this system to be far from reach or not commendable for and by the ones who couldn’t afford it. The ordinary public doesn’t even bother to gain knowledge or show interest in this research. 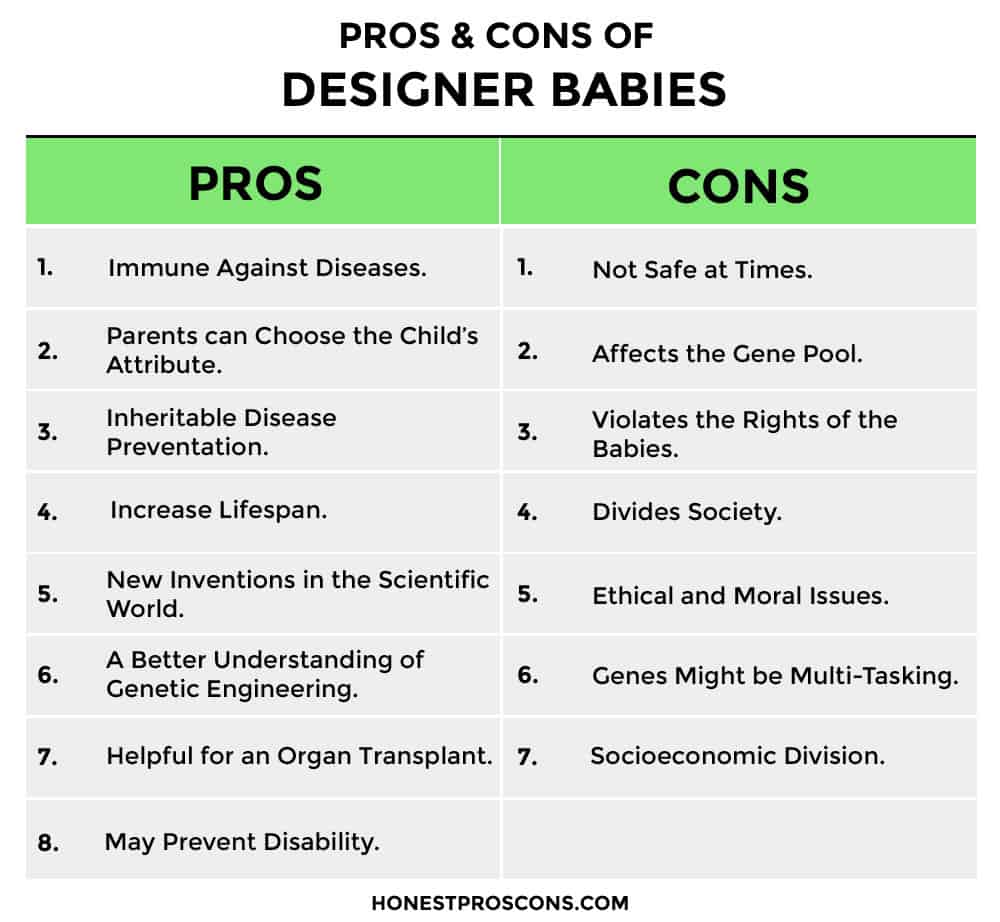