Fracking gets its name from hydraulic fracturing. It is a procedure to stimulate the generation of hydrocarbons from unconventional gas reserves. To simplify it more, it is a way of getting more of the valuable fluids like oil and natural gas out of geologic formations under the ground.

Deep underground lies the stores of inaccessible natural gas which was likely to have formed years ago as layers of decaying organisms were exposed to intense heat and pressure under the earth’s crust and a technology called hydraulic fracturing or fracking can extract this natural gas potentially powering us for decades to come.

It is a growing phenomenon and is seen increasingly significant to the United States’ energy security. Unconventional gas development made up 28℅ of the US total gas production in 2008 and is foreseen to be up to 60 percent by 2035.

However, it has its own share of benefits and drawbacks.

Fracking can be extracted from rocks which can provide a better way to access many other natural deposits of oil and gas than it was done before. It allows access to the deep layers of underground rock.

It reduces tax on oil and gas. It will be a lot simpler to access petroleum to power up cars or gas to cook food when consumers will be able to acquire these resources in a cheaper and more affordable way.

3. Reduces the Import of Foreign Oil

The use of hydraulic fracturing will help nations to strive for better domestic sources of oil. So as the production increases continuously, it will only be practical to look for alternative oil and gas sources at home. This is a lot better than depending on foreign countries to respond to local demands.

It has made a positive impact on the economy of the USA since it accounts for about $385 billion in direct economic activity, as reported in Nature piece of 2012.

The fracking processes involve long steps and skilled workers and other employees are needed to carry out tasks in the fracking process. The industry that promotes hydraulic fracturing will be able to generate thousands of employment opportunities for local labor, in fact, it already has and keeping in mind the pace of development of this industry, the number is expected to increase in the near future.

Fracking fundamentally utilizes an enormous amount of water, sand, and chemicals that are blasting underground rock formations to air them out with the chemicals injected deep under the earth, they would make less or no harm, compared to when they are discharged superficially or noticeable all around. They are less likely to pollute water bodies, guaranteeing that people remain protected and sound.

1. It Requires a Million Gallons of Water

When fracking is required to establish or expand access to an energy resource, it may take up to 30 million gallons of water to complete the process. That means billions of gallons of water have been used in the last decade to improve our access to fuel resources. Cape Town, South Africa is facing a severe water crisis where they could run out of it in the near future.

Fracking is a very loud process and goes on for ages. For people living close to places where fracking is taking place; since it can take place almost everywhere, including areas that are otherwise highly populated. The constant noise of heavy vehicles coming and going for days on end can have a huge impact on daily lives.

Methane is one of the most harmful and potent chemicals, in fact, 20 times more potent than carbon dioxide. NASA estimates 25% of the emissions which may cause climate change to come from methane emissions. It can also come from the fracking process.

Cornell University found that the number of leaks that are in the typical fracking process, from start to finish, is high.

4. It can Create Ozone

Ozone is a gas that protects life on Earth from the sun’s ultraviolet (UV) rays. The procedure of fracking causes ozone levels in the area it happens to rise. Ozone can activate medical issues when it is breathed in, which incorporates throat irritation, coughing, and chest pain. In certain people, it can diminish long functions and make tissue scar.

Occasionally though, the injection of fracking fluid or wastewater can cause movements in the natural pre-existing geological drawbacks- large cracks that already exist in the rock.

According to the report, there was an average of 21 earthquakes per year in the United States that were 3.0 or greater on the Richter scale in the central and eastern states from 1967-2000.

Fracking has been a very controversial topic. It is a source of employment in the energy sector and strengthens the country’s stance on the global energy market. However, damages are also produced. It also shows that the technique needs to be changed to become more environmentally friendly. 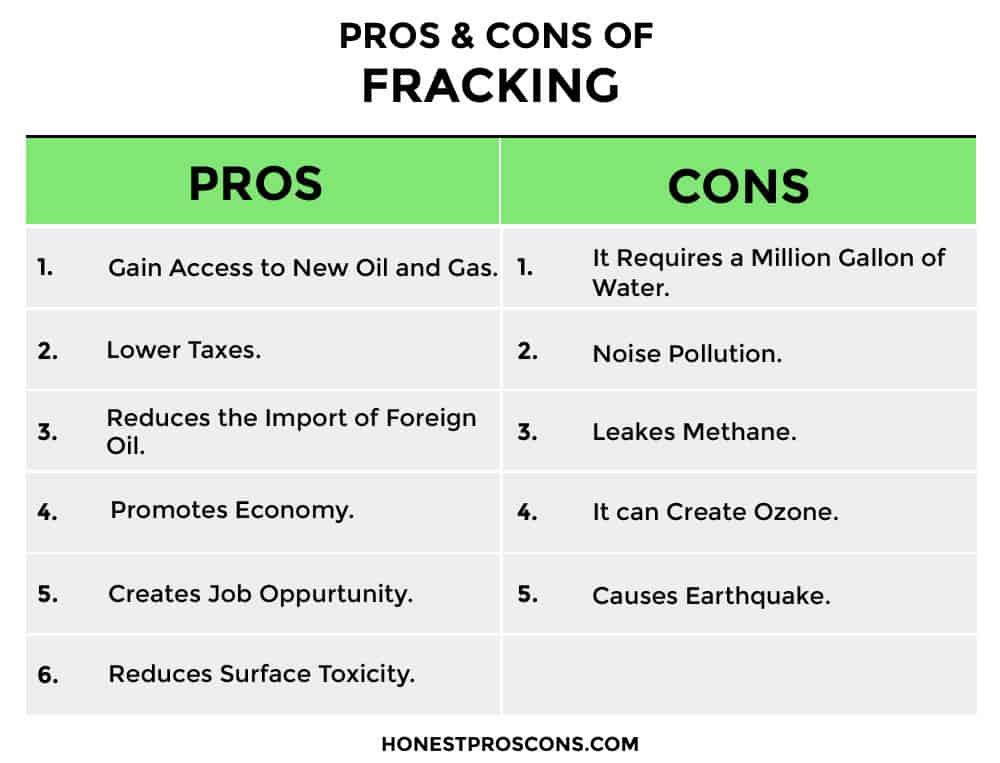