In medical research, gene therapy is an advanced procedure that uses genes to help eliminate or cure diseases. In this strategy, the aim is to create a potential society where doctors will cure complex diseases by injecting genes into the cells of a patient instead of using surgery, medications, or other health improvement treatments. 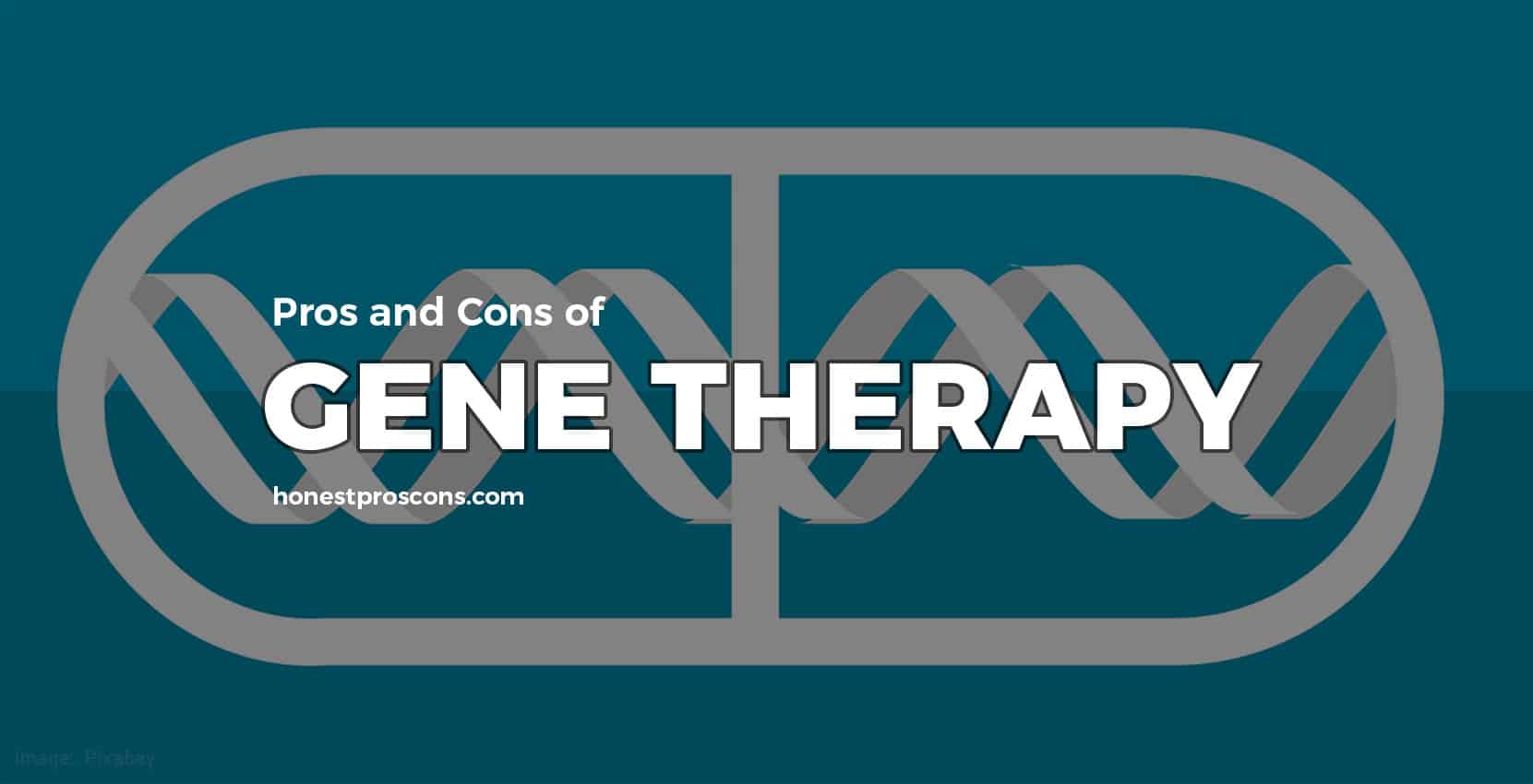 Today, there are many distinct approaches to gene therapy being studied. One procedure entails a defective gene being replaced with a healthy copy of it. There is the chance of deactivating a mutant gene so that its improper functionality stops. To help them fight a disease, doctors could also put new genetic material into the body of a patient.

The pros and cons of gene therapy indicate that, for certain inherited disorders, tumors, and viral infections, this promising treatment choice is potentially useful. It is also a strategy that comes with a more critical collection of hazards than conventional methods. In order to decide whether it is safe and efficient for everyday use when targeting diseases that have no other cures, experts are still researching the method.

There are multiple births that suffer abnormalities and genetic disorders, even with rigorous tests in place for parents. One of every 33 babies suffers a birth defect of some sort in the United States. That’s 3% or so of all births.

The leading cause of child death in the US, responsible for 1 in 5 deaths, is birth defects. Any of these mutations may be reversed with gene therapy to decrease these deaths.

There are small prospects of remission when replacing a dysfunctional gene with a functional gene in a condition such as cystic fibrosis, and this is typically a one-off procedure that will see you free of symptoms for life.

In addition, gene therapy is not only a treatment for the person suffering from a given disease, but it covers the generation as a whole. They cannot pass the damaged genes to their descendants when you remove a gene that predisposes us to breast cancer, but the new functional gene.

About 10 percent of the general population is afflicted by rare diseases. More than 30 million persons are affected in the United States. There are over 7,000 different diseases that occur and flawed genetics are responsible for approximately 80 percent of those diseases.

Healthy cells may substitute the damaged cells with gene therapy to provide the infected person with a legitimate cure.

4. Aren’t Limited to Humans Only

It is possible to extend the lifespan of animals as gene therapies are applied to veterinary science. To avoid loss, we could treat genetic disorders in animals. This will stabilize our animal protein food chain as added to livestock.

It could be extended to plants so that, without extra DNA and genes added to them, they would naturally survive disease. The chances to support life, in whatever shape it may take, are nearly infinite.

5. May Treat More Than Just Disease

Gene therapy approaches could provide the ability to start their own biological families for people suffering from infertility. Successful fertility changes have occurred in mice using a modified gene therapy procedure called “CRISPR.” This creates the potential to one day have a similar impact in humans.

In the United States, approximately 3% of births contain a disease that is theoretically treatable by the application of gene therapy techniques. Many of the children born in this demographic, die shortly after birth due to the debilitating consequences of their disease.

With this option, which affects approximately 20 percent of families per year, birth defects are also potentially preventable. Instead of paying for hospice services or being pressured to say goodbye right away, physicians and scientists give parents more hope for a better future because of the accessibility of this technology.

Since gene therapies are technologically oriented, their average expense may decrease as new techniques and advances reach the medical industry. Initial therapies can be costly, but there may be no future for treatment in the coming generations. As more research happens in this sector, prices will drop.

We have experienced this with penicillin once. The price was $20 per 100,000 units when it was first launched. That’s the equivalent price of $70,000 per treatment, with a standard dosage being 4 million units. The price of penicillin today is just pennies per dose in many cases.

There are some options for gene therapy that are available right now, but they come at a high cost. If you are using Luxturna to treat both eyes as a means to treat blindness, more than $1 million may be the final bill. Even the “affordable” solutions begin at $200,000 per care in this area.

That is why many patients wait for clinical trials to start, and then qualify for a spot in one to get the assistance they need. Because of the uncertainty, most health care insurance plans would not bear the expense of these treatments.

Nature can readily respond to changes that occur, as we have seen with the increasing resistance to antibiotics. Gene therapy may be beneficial today, but in the future, further alterations to genetic profiles may trigger unexpected diseases.

There is no certainty that gene therapy’s future prospects could live up to its current potential for particular diseases to be treated. Without understanding it, we could be developing new diseases for future generations by altering genes.


The most common method for gene therapy to be delivered to patients is via retrovirus delivery systems. The concern with this option is that before it has the opportunity to function, the enzyme used to facilitate the transmission of genetic data can be destroyed by the immune system.

Problems with cell division or replication that limit the treatment ‘s efficacy may occur. If there is a visible change in the cell, the body can attack itself without the presence of an immunosuppressant. The success stories for gene therapy will always be hit or miss until we can remove and substitute genetic data with greater certainty.

The immune system of the body can see the different viruses that we use as invaders to replace unwanted genes that must be extinguished before they cause damage. It is not uncommon for a patient to develop health complications such as inflammation, dizziness, and headaches when white blood cells invade the newly added genetic material.

In extreme reactions, it is possible for the immune response to attack the organs of the body and cause them to malfunction. That’s why an immunosuppressant is used with medication plans, but this medicine can make someone more vulnerable to illnesses and disease.

5. May Unlock Unethical Forms of Science

The science of eugenics becomes plausible when mankind has the knowledge to manipulate a genetic profile. It will build a future in which children have their genetic profiles altered in vitro such that a particular outcome is obtained.

This will introduce numerous “standards” of humanity, establishing a distinct class of people who has been “perfected”. It would also dramatically introduce the income inequalities that occur in certain cultures so only anyone who could afford it would have access to this facility.

For a valid cause, gene therapies have been stuck in trials for a generation. It has been proven that all of the gene therapies that actually exist are mostly ineffective.

For a brief amount of time, diseases that are treated by gene therapy improve, but soon return to the state they were before treatment started. Even for the successful ones, continuous procedures or tissue donations, such as bone marrow, may be needed.

It can encourage gene doping. Although gene doping is not actually understood to exist, it is a mechanism that may equalize sports or educational opportunity if fair access to technology is provided.

If an individual succeeds because of therapy when they may not have the same levels of success without gene therapy, it is a matter of ethical consideration, particularly when contemplating athletic competition.