Genetic engineering means transgenesis, the technology of copying genotypes from one species to the same or different species. The outcomes are known as ‘genetically modified organisms(GMO). 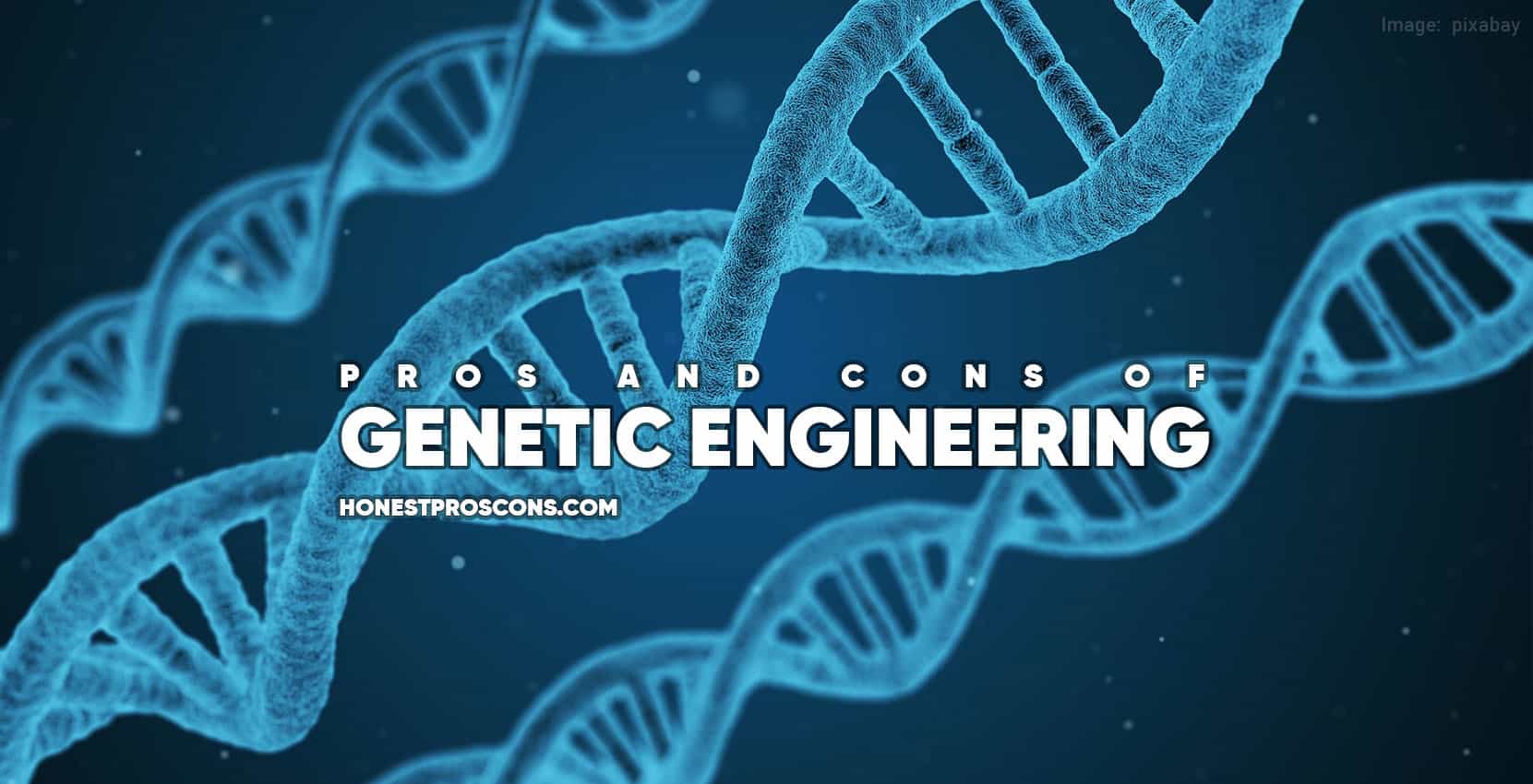 It is the process of modifying DNA in plants, animals, and humans using techniques like molecular transformation or cloning.

Genetic engineering has been saving thousands of lives. It is one of the most important parts of modern biotechnology. The plant that can grow in harsh weather and low light by the alteration of the gene and the modified immune system is created using the process. It can be used to create many sustainable foods for the world population. It has many other advantages as well as disadvantages.

Many failures have been followed by criticisms raising some ethical questions. The modification in the DNA is certainly a complex procedure, the small mistake is going to cost the whole life of an individual. There can be alteration when we try to play creator knowing less about our environment and its resilience.

The implication of genetic engineering has both the pros and cons which has to be balanced. The continual research and experiment have to be carried to know about the side effects and future consequences.

Genetically modified crops and animals can mature at a greater speed comparing to naturally processed. E.g. the crops can be engineered to get better yields, and flavors to gain profit from cultivation as well as provide healthy vegetables. In the same way, dairy cows can produce more milk and sheep can grow wool faster. This advantage of genetic engineering helps the agricultural sector for profitability, additional resources, and fast supply in the marketplace.

Humans are considered to be powerful beings as they top the chart of the ecosystem. They have been manipulating plant and animal life, even though DNA modification was not possible at those time. They identify the specific property in plants and animals to practice genetic engineering through selective breeding and cross-species or crossbreeding. DNA modification and genetic engineering takes the concept to a new level.

There are many pros of genetic engineering one is benefitting human health. This technology allows modification of the genotypes in the unborn who have birth defects or syndrome. They improve the chromosomes and sequences that enhance the health condition of many patients. Genetic engineering went to the extent of growing limbs using stem cell therapy, human cloning. In critical cases,  they can create outcomes using the patient’s cell where the risk of rejection is very minimal.

The hereditary or genetic disorders can be treated by genetic engineering. The scientist has solved the genetic codes, unfolding the mystery about the function and nature of the genes. Through genetic engineering, they can identify and treat the disease or strengthen the immune system to fight against it. This aspect of genetic engineering is stunning the world with its unbelievable achievements.

Due to genetic engineering plants are growing in harsh climates and animals are being resilient to some diseases without medication. This procedure replicates the gene and performs an alteration process to make them less susceptible to encounters in the environment. Genetic engineering can create crops resistant to pests even when they are in seed form as well as built-in repellents which keeps away the diseases, preventing pesticides and other chemicals used in a crop.

Untimely death or suffering is prevented by the advancement of genetic engineering. Genetic profiles of plants and animals are modified so the crop can mature without any additives and reduce the risk of health in an organism.  We accept all the changes while eliminating the risk that may appear in the future. It reduces cancer, has a cure for ALS, Parkinson’s disease, or Alzheimer’s disease. Providing suitable treatment and environment creates the potential for an extended life span of an organism.

New products can be produced which are better for human health. The food that can survive in unfavorable conditions helps to avoid starvation in many places and the desired production of the food will aid the people in need during a crisis. The era of new technology has benefitted genetic engineering to cross its barrier. This opportunity can be utilized by creating vaccines needed for specific populations.

Positive Traits need to be Utilized

The specific characteristics of plants and animals developed through genetic engineering can make them more attractive and consumable. The molecular transformation allows the production of various range of products like many color options and size variations. In the same way, animals can produce more milk, more meat or produce wool and leathers for a wider range of fabrics.

Genetic engineering allows the crossing of modified and non-modified species which might have an effective solution. But the dominant new gene will suppress the original gene, which might create the generations of species. When a scientist tries to modify the gene of the plant it may grow on the harsh weather, but it might be affected by the sunlight. The side effects are never known until it affects a mass which is the risk factor. Some cons of genetic engineering are stated below.

Reduces the Nutritional Value of Products

The genetically developed crops, as well as animals, has the probability of having less nutritional value. When the products are developed fast and genetically the lack of time prevent nutritious outcome. The poultry broilers are an excellent example of this disadvantage. The fat content of the meat consumed increases by 220% as the amount of protein is reduced.

The genetically engineered plant and animals both have side effects. If a bacteria or viruses cannot get through repellent of the plant and animal, there is the possibility that they will grow resistant against disease or will affect the non-genetically engineered organism. Certain genes are altered to gain resistant against some pest or diseases which can fire back when the genes are transferred to the pest or the pathogens. It can severely affect the human food chain if the pathogen targets multiple species like bird influenza and a  virulent livestock disease of goats and sheep.

Genetic engineering has entered every biological aspect on the planet from plants, animals to humans. If the number of genetically modified plants and animals are being produced, it is certainly going to decrease diversity. Industries will focus only on the preferred product where the amount of profit is high. If the diseases become resilient to the modification after generations, millions of lives will be at stake.

Genetic engineering works at the cellular level, which means more risk. When the genetic modification is completed, it might add up the strength but the side effects are only identified when encountered. Unpredictability leads to the new future problem presenting the solution for the current crisis. The evolution of life is a complex matter even for scientists to handle.

Genetic engineering still has to unfold the functioning of cellular development in organisms where most of the experiments are still in progress. There are millions of composition in the genetic codes even the smaller error can cause severe damage. Changing genes in the growing baby may lead to birth defects or even miscarriages. The margin of error is none, which makes it complex and unpredictable.

Two Species When Crossed has Consequences

When two species, one genetically modified and other natural are being crossed then the modified ones tend to dominate the other, suppressing its natural quality. At one point the species will be resilient and the future generations have to deal with the consequences. This would create many unknown hybrids on the plant as well as an animal kingdom which might be a threat to the environment and society.

Currently, genetic engineering is gaining attention to its savior act, where thousands of lives have been saved. It is not just an experiment, the cellular characteristics that can hamper the whole civilization will be a threat if in the wrong hands. It can raise some ethical questions about creating or modeling the human as in “designer baby” and creating a new global society that would be hard to handle. It can be abused by altering the characteristics and intelligence of an individual. 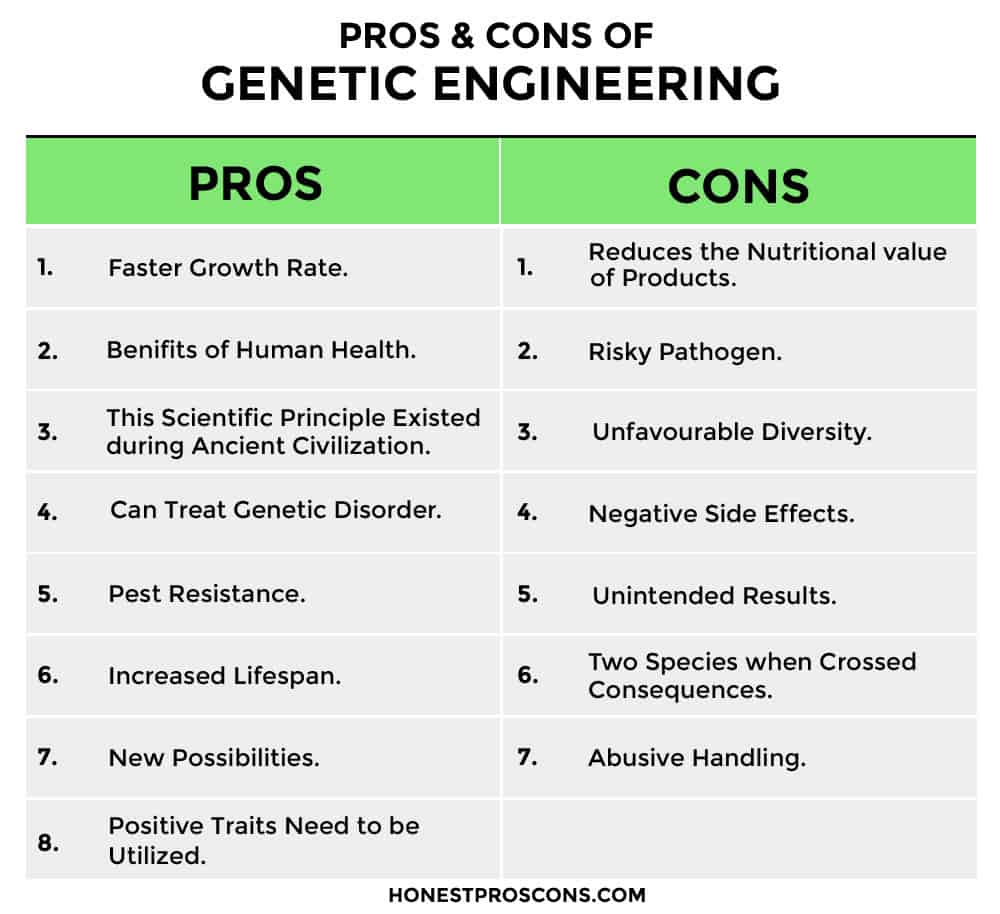