Human cloning means the genetically identical copy of a human, which is the reproduction of human cells and tissues. There are two types of human cloning therapeutic cloning and reproductive cloning. 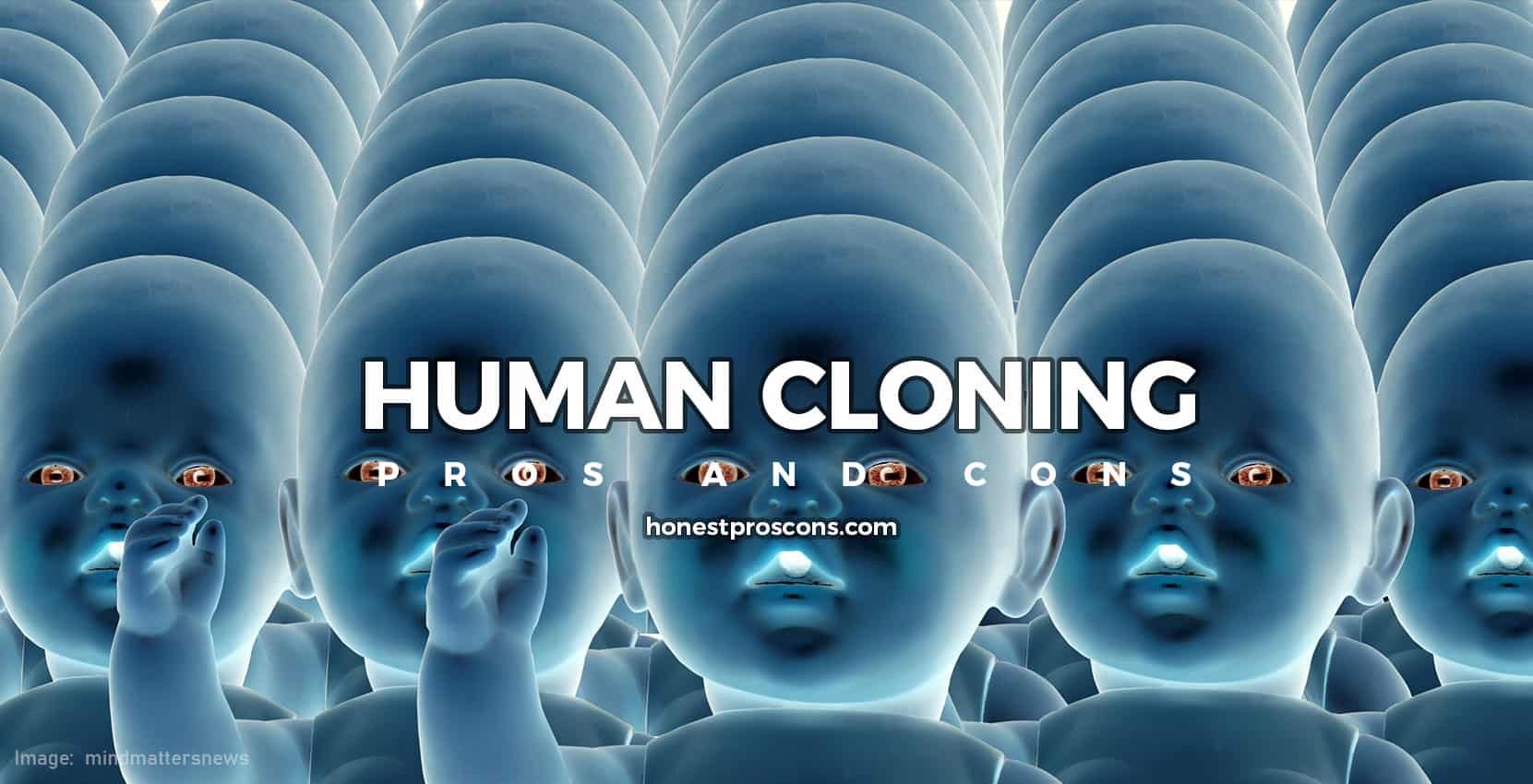 In therapeutic cloning, cells are cloned from humans for use in medicine and transplant but have not been experimented or tested medically. It has two methods somatic cell nuclear transfer and pluripotent stem cell induction. Whereas, reproductive cloning means making an entire cloned human, rather than making cells or tissues.

In today’s world, human cloning has become a major topic of discussion regarding it’s immoral or unethical reasons. Critics point to the fact it can be a risk factor affecting human being’s uniqueness, psychological and physical wellbeing and might result in potential harm to the society.

On the contrary, accepting all the consequences its hard to ignore the benefits and advantages that can be gained from human cloning. Human cloning can bring huge benefits to medical treatments such as organ cloning and transplant as well as fertility problem.

A Better Solution for Infertility Problem

Infertility might be scary for the couples. Human cloning is the best option for them which helps them to have a baby who is genetically and biologically related. Doctors take the genetic profile of each parent, infuse it into an embryo outside of the body, grow the fetus in a laboratory environment. This option works if the couple is not interested in other methods such as surrogacy or IVF methods.

The advantage of human cloning includes the development of technology and achieving the impossible goals in medical science.

After creating the clone of an individual, they can experiment with different therapies or alter the genetic material to find the cure of diseases and possible medication. The achievement will bring the sigh of relief for the people around the world suffering from particular diseases.

The advantage of human cloning includes the genetic modifications of the child as per their parents want. They decide the sex, eye color and other characteristics they want in their child. Doctors implement enzymes form bacteria to locate genes within our DNA to create the necessary modifications for duplication.

As the generation passes, DNA lines might be damaged which creates defected or mutated genes. Genetic birth defects which lead to abortion is not a solution.

The advantage of human cloning is it helps to clone the healthy cells and replace it with the defected ones. Human cloning helps to eliminate the genetic defect from the patient as well as stops it from spreading to further generations.

The advantage of human cloning includes fast recovery from the horrific traffic accident and tore muscles. Cloning cells lower recovery time and the healing process as the healthy cells are replaced in the infected area.

Doctors cloning the exact cells that the body requires itself decreases the recovery time and the healing process occurs and works effectively.

The miraculous advantage of human cloning is regrowing the organ lost and organ transplant. The patient who might lose their body organs due to accidents or certain diseases can regrow their organ possible due to human cloning.

With therapeutic cloning, adult stem cells will be cloned to replace damaged tissues. This helps grow the body part required and transplanted by surgery. For donated organs it is hard to find a donor when required and still has the risk of being rejected.

Human cloning might play a vital role in providing hope for people who might suffer from severe diseases. As well as help people to have a positive influence in their life as it spreads light and solves many issues that lead to depression. It makes possible for people to obtain and live a better quality of life.

Human cloning has many disadvantages regarding its limitations, defects and unethical incidents which might lead to serious issues. It carries many social agendas along with the experimental failure and life-risking procedure.

The investment done for human cloning is enormous by renowned investors but the ethical and religious belief is still questioning its advancement. Here are some disadvantages of the human cloning state below.

As a cell begins to age, they contain the information in their physical structure. This information could be adopted by the growing embryos, which might create premature aging issues, even premature death.

As we know the cloning of cells is possible, if the genetic age imprinting does apply to the human genome then this could lead to new genetic diseases increasing the risk of premature death.

The disadvantage of human cloning includes the religious and ethical issues, implying man becoming the creator. People who strongly believe that reproduction is God’s will between man and woman oppose it happening through science in the lab.

They consider it as changing the authority of a supreme being here being doctors and scientists. Although these controversial matters are not based on facts but emotional, many activists strongly prohibit these procedures.

The main purpose of cloning human cells is organ transplantation, there is no assurance that the organ cloned will not be rejected. This complication may occur due to significant differences in cell makeup between the cloned and the original organs.

The major disadvantage of human cloning is the success rate being far lower than the failure rate. This may change in the future but currently, these stats are enough not to risk human lives.

The criticism human clones facing are regarding those clones never survived for years and some were destroyed once defected. As there is only 3% success in animal cloning, people are more concerned about human cloning.

Lack of Identity and Individuality

The human are different from other beings considering there experience they gain during there livelihood. The disadvantage of human cloning is the sense of individuality and identity that diminishes in the identical copy. The human clone would be the twin of someone else, regardless of the age of that person.

It Can Cause a Divide Among People

The division of the society among the people might arise. This disadvantage of the human clone is a serious issue, where the clones might not be treated as equal to the citizens who are conceived naturally.

In today’s world gap and the difference between the race to social status is the reason for chaos. These indifferences might result in new issues around the world which might cause more harm.

“You only live once, but if you do it right, once is enough.” These are the beliefs since the beginning of humanity. Human cloning might make humans more of a commodity than an individual.

Parents aborting their children regarding their sex, characters, and colors might generate the new races of people who are made just to be perfect. But the world believes in compromising and adjusting with the outcomes which will no more exist.

This disadvantage of human cloning will hamper the thinking and concept of the generation to come and devalues human life.

As human cloning requires many complex procedures from the beginning which is very expensive and cannot be afforded by all. We still have our socioeconomic divides in place, even with this science, because those with money could afford more features, add-ons, or processes than those who are struggling to put food on their table. The disadvantage of human cloning also includes the socioeconomic division between the beneficiary. 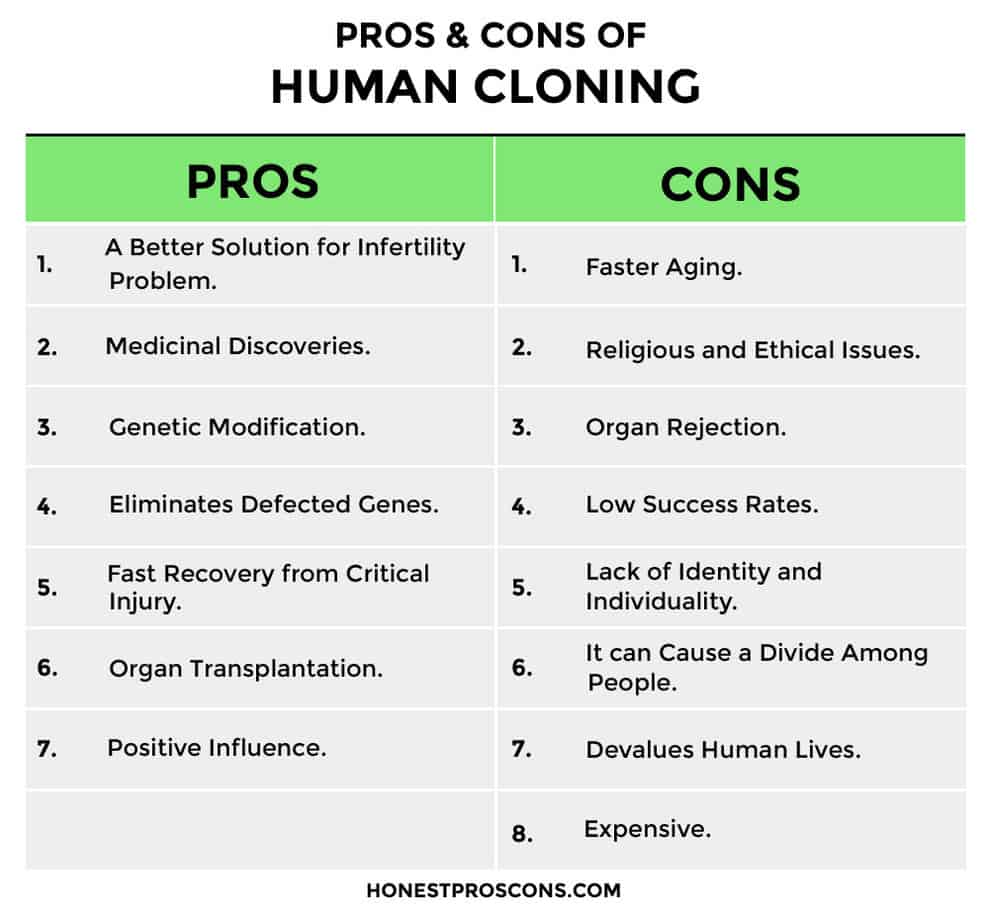