Internet Censorship is something for debate. Many of us might already know that the Internet was previously also known as the ‘Information Highway’ meaning anyone who needs information available on the internet could freely get it. It was like getting anything you want from a grocery store without even paying for it. 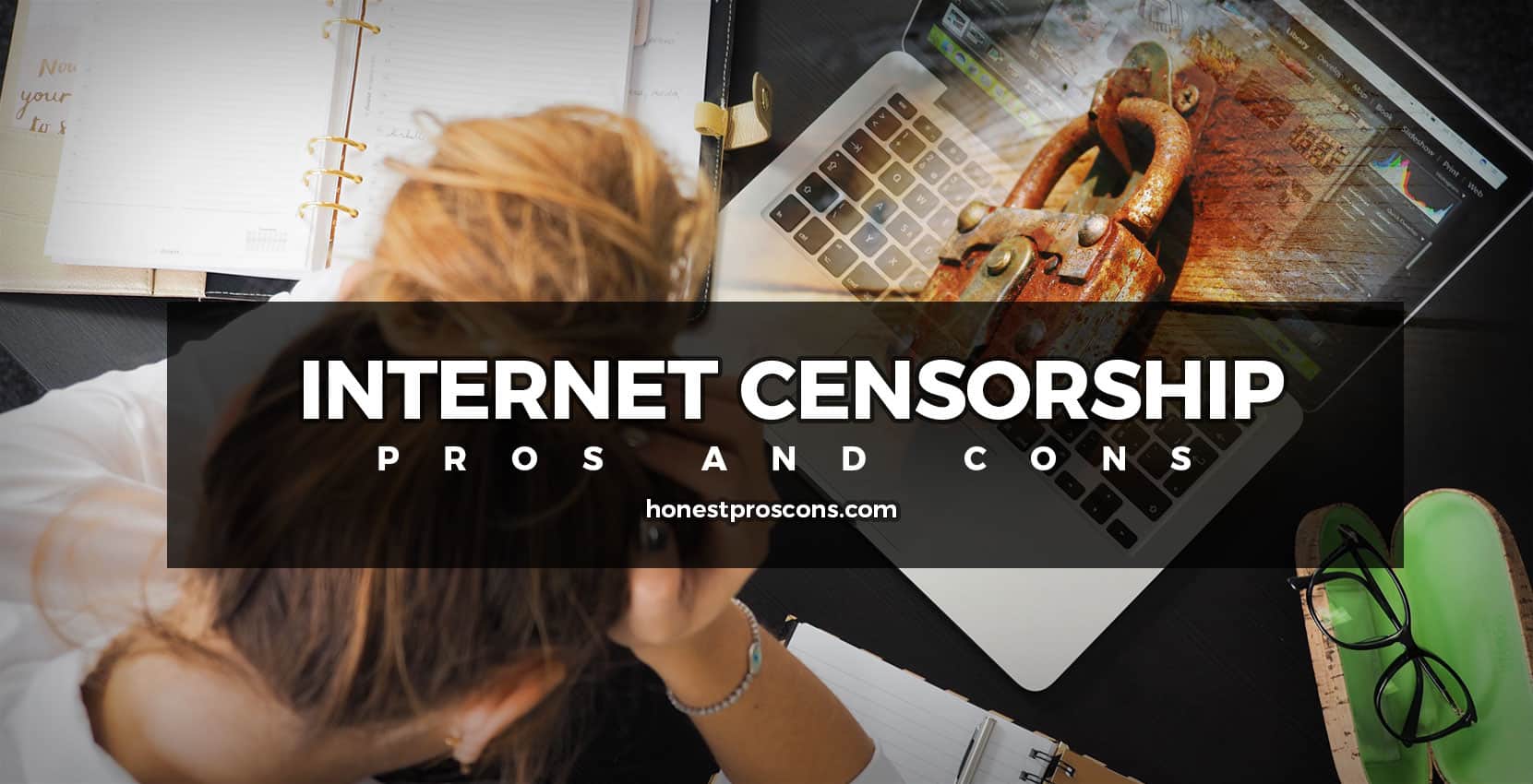 However, the information highway is not open for all these days. There have been several controversies and debates around the free nature of the internet to all.

Government policies intentionally prohibit certain websites and web services from the public to make sure peace and harmony is maintained in the society. The contents may be restricted by being related to terrorism, pornographies, extreme violence, and confidential information.

2. Software that limits access to some definite websites and web services.

There are some software or applications made that do not allow certain websites to be accessed. For example, colleges and universities might restrict websites like Wikipedia and Investopedia to avoid students from being dependent on them. Besides, organizations might have to block the addictive social networking sites like Facebook, Instagram, and TikTok.

While the debate continues, some undeniable points prove that internet censorship is a sensitive issue and needs a critical point to view to deal with.

1. It channelizes the thought process as to what to focus on

If the censorship is enforced, the focus on the important issues in our life gets the right channel. College students will not be distracted and office goers will be sincere in there work. More than required access to the internet has made every individual less efficient to their work and the result on their performance shows it all.

Because of the addiction to the internet and social media, serious issues like medical health checkups, important social events get sidelined with the current generation.

When the unwanted access to the internet is avoided, the productivity of individual soars up for sure. Initially, you might feel like you are forced to do what you are supposed to do but you’ll get used to it and realize that your efficiency has increased and you’ll start performing way better than earlier.

3. Limits or Discourages the False News

It’s a pretty evident fact that the rise of social media has increased the circulation of fake news. With the increase in the popularity and use of social networking sites like Facebook, Twitter, and YouTube, everybody seems to be in the race of becoming a news reporter and a videographer.

Blogging and making news are two different things but these days in the name of blogging, people have started creating fake news with scandalous and exciting news titles.

With the enforcement of Internet Censorship, these issues will, to a larger extent fade away.

Something called the Dark Web is a small part of the internet which is beyond the reach of search engines and the data stored in the dark web is anonymously used for illegal activities which pays a lucrative price of course.

This Dark Web is slowly growing to be a dumpsite of individual information like social security numbers, medical records, bank details, passport information, etc. The hackers use these details will ill intentions and sell this information for a hefty amount.

Internet Censorship, if enforced would help the authorities to restrict these activities and maintain peace in the internet world.

Hacking is obtaining unauthorized access to a system or a computer. There are two types of hacking: Ethical and Unethical.

Unethical Hacking is infiltrating into some unauthorized network, system or computer to illegally obtain information that is restricted otherwise while Ethical Hacking is done to identify and manage the loopholes of a system so as to avoid unethical hacking.

Cybercrime has taken a toll on human society in the recent past. Development of technology like Face and Speech Recognition, Artificial Intelligence, etc has become a handy tool for the people who have ill intentions. These technologies and procedures have been used to proxy verification of identities and get access to something that is not allowed.

With Internet Censorship, this problem will also be taken care of.

People might argue that the internet itself is the reason for the problem caused. Internet supposedly should be open to all but that in no way means that intellectual property will be free for all to use the way they want.

Intellectual properties are hard-earned and the owner has all the right to get the credit for them. Internet censorship could be just the right tool to address this issue. It should be implied in such a way that the people who are influenced should never take things for granted and never use the owner’s property without consent and permission.

1. It narrows the Opportunity to Know and Learn Just About Anything

Restricting contents available on the internet is restricting information and an opportunity for knowledge. Everybody should be able to use the internet with no restrictions if they are willing to understand and learn from it.

Internet Censorship will restrain people from all kinds of possible and useful information that they are interested in and the possibility of them being inclined towards certain things that they might build their career on.

Enforcing Internet Censorship might end up people getting involved in illegal and more serious activities which eventually will not serve the real purpose.

3. The Process Cost itself

Internet censorship cannot be enforced just by passing a bill or awareness or by simply declaring. This needs a proper plan and a system that detects the category and type of contents that need to be censored.

A study conducted by the Brookings Institution found out that those countries where internet censorship is enforced to spend more than 2 billion each year in making sure it is properly practiced. Case study of Egypt can be a good example that shows the amount of cost it had to bear when they decided to disconnect the users within their borders.

Access to Information is a right in most of the countries in the world. Internet Censorship disregards that right and prohibits people from certain information. Wrongdoings can be controlled by other means but spreading information itself cannot be labeled as a wrong thing to do.

Internet censorship is against the spirit of “Freedom of Information”. It in fact indirectly makes information a “commodity” and people make illegal money by selling the information if censored.

5. Prevents the Development of New Interest in Kids

Learning new subjects is what kids do as they grow up. Growing up in such a society knowing that they won’t be able to access certain kinds of information and there will be a restriction as to what web pages they’ll be browsing or what information they’ll be sharing is in itself a letdown.

As the saying goes, little knowledge is dangerous, restricting people to only fixed kinds of information might backfire.

Imagine yourself in a huge room where you are provided with a lot of things you can do to spend your time. For a imagine everything you’ve ever wanted in your life is with you but its just that room and you are not allowed to get out of it.

Now imagine yourself in an open space(a large ground with no walls or a mountain) with nothing but the freedom to do whatever you want to do and wherever you want to go.

Which one would you choose?

The restriction is not desired. It’s an obligation and life with obligations is not a happy life.

7. Against the Spirit of Globalization

Globalization is the key to success in an individual and in the national level as well. Globalization enables people to replicate success and make the impact more powerful. Internet censorship is against the spirit of Globalization because it advocates the opposite of what globalization favors. 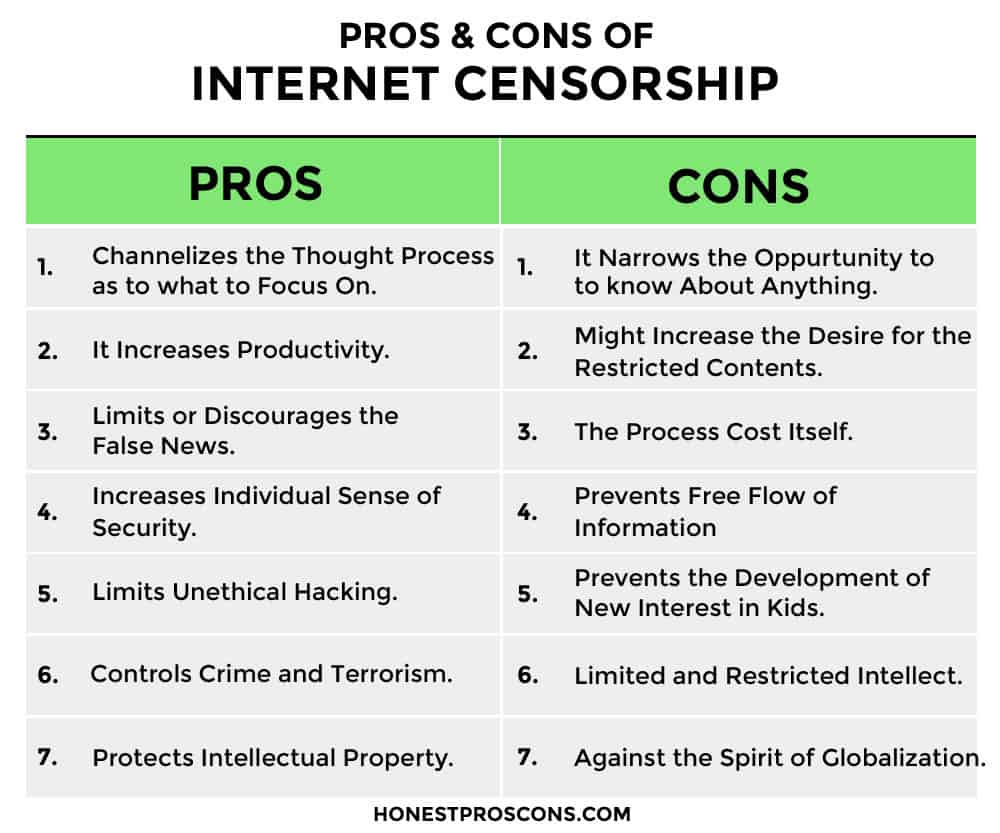