Often referred to as “the Windy City”, Chicago officially became a city in the state of Illinois in 1837. Evolving from an Algonquian word “Chigagou” meaning onion field, the name Chicago was first recorded in 1688. Today, it’s the third-largest city in the United States after New York and Los Angeles with an estimated 2.7 million residents.

Pros and Cons of Living in Chicago 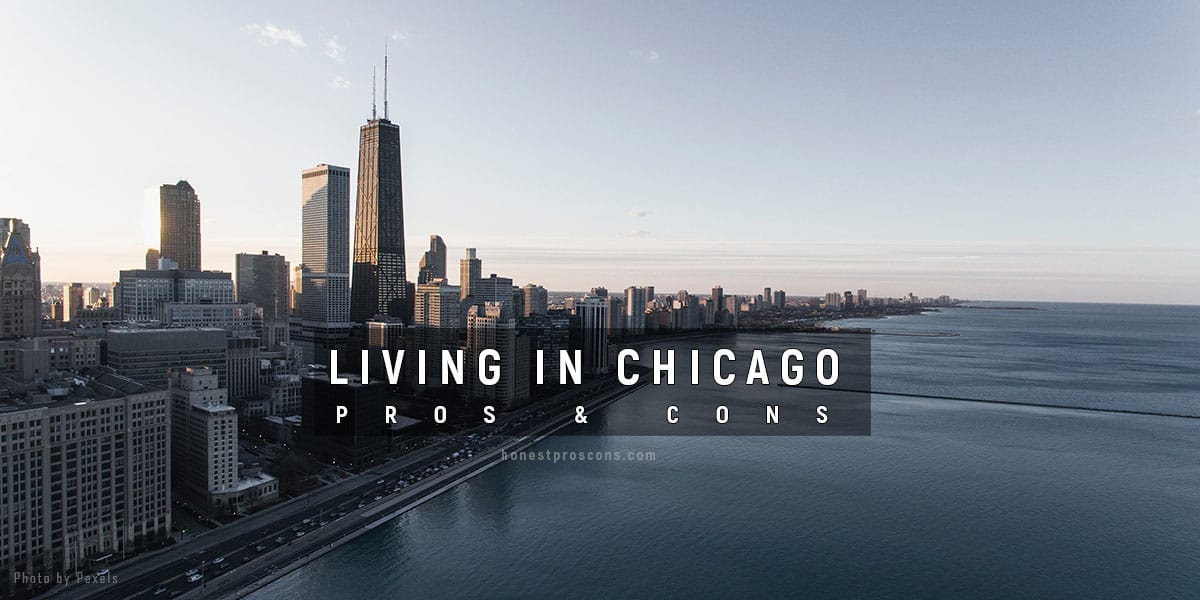 Chicago is big, both in terms of size and history. It has served a major role in the development of American culture, economics, and political history ever since its founding.

It is known as the  American railroad capital, with more major railroads serving the city than any other place in the US. Besides history, it is home to some truly amazing food, music, theater, museums, and schools.

Located on the shores of Lake Michigan, Chicago is no doubt a great city to call home. I mean, who wouldn’t want to devour diverse food, strolling from a park to another while commuting through multi-leveled streets, right? However, like every other place, there are some downsides to living here too. For a detailed view, let’s dive in.

9 Pros of Living in Chicago

Although Chicago has suffered its highs and lows, it has continued to grow through a combination of commerce, education, manufacturing, and broadcasting.

A focus on improved housing, public programs, and administrative work helped Chicago bounce back after the great Chicago fire back in 1871.

The confidence and independence with which it has been continuously growing are truly notable. Here are some advantages of Living in Chicago

The popular destinations of Chicago are usually short walks away from each other.  Every eight blocks equal a mile and walking around would allow you to unfold the real treasure and architecture of the beautiful city.

Besides, Chicago is home to the second-largest train system in the States and buses and trains of the CTA (Chicago Transit Authority) are a fast and cost-effective way to get into and around the city.

Sports are a massive part of Chicago’s culture. Home to 15 sports team, Chicago has been named the Best Sports City in the US not once, but thrice. Chicago’s National Basketball Association(NBA) team is none other than the Chicago Bulls and Michael Jordan’s references are everywhere.

3. Rich in History and Architecture

Chicago is known as a trade hub ever since its founding in 1837. The history of Chicago is truly rich in the sense that it has always been contributing to American culture, economics, and politics.

The skyline of Chicago is breathtaking. It has had a reputation for being a “laboratory” for architectural experimentation and innovation. So you’re likely to find a unique combination of traditional and modern architecture.

Undoubtedly, Chicago is one of the world’s best cities for food. From deep-dish pizza to world-famous Chicago hot dogs, Chicago food is truly iconic. Visiting beautiful places while having something delicious to munch in, will be the cherry on the top. Be sure not to miss out on Chicago’s signature dishes.

The city of Chicago has remained the business center of the US  for most of its history. Moreover, some of the Fortune 500 companies have chosen Chicago as their headquarters. In fact, as per the data released by UBS, a financial services company, it is the ninth richest city in the world.

You shouldn’t miss out on St. Patrick’s Day celebration when in Chicago. The city adds green dye to the Chicago River on that day. This tradition of letting the river flow green started in 1962. Today it draws over 400,000 people to experience it.

Additionally, the city offers the most dance music festivals in all of the US. From the largest free outdoor food festival to world-class blues festivals, Chicago proudly hosts them all.

Chicago doesn’t provide an ocean beach, but there’s Great Lake Michigan for your rescue! It’s one of the largest lakes in the world and has many beaches. Moreover,  it is also the only river in the world that flows backward. The reversal of the river is recognized as a great engineering achievement.

Chicago is filled with gorgeous parks, outdoors and natural areas. Particularly in fall, they’re mind-blowingly beautiful. There are more than 500 parks in the windy city which makes it one of the best places to live in the world.

Lincoln Park, Millenium Park, Garfield Park, Grant Park, Horner Park, Oz Park, and Medill Park are the best among the bests. Besides these parks, there are several Bird sanctuaries and conservatories which you can visit during leisure.

Chicago, being one of the largest cities in the world, has multiple convenient airports. Since it’s a financial hub of the world, people travel a lot. Good air transportation facilities will always be helpful to these people who constantly travel across the world and so, this is considered one of the biggest pros of living in Chicago.

5 Cons of Living in Chicago

With criminals like Al Capone, John Dillinger, and Baby Face Nelson marking its history, crime is one of the first things that come into mind when thinking of Chicago. Although crime rates have significantly decreased over the past years, it still is relatively high than the national average.

According to the official reports produced by the Chicago Police Department, more than 550 murders were registered in 2018 and there are over 60 street gangs with thousands of active members. Hence, crime is said to be one of the biggest cons of living in Chicago.

The high cost of living is a problem most big cities have. As far as Chicago is concerned, the cost of living here is 20% higher than the national average. This is based on house rents, average monthly energy bills, food and grocery costs, and also other utility bills.

Compared to other cosmopolitan cities in the US, transportation costs are high as well. Healthcare isn’t any different either. Overall, Chicago is one of the expensive cities in the world and you gotta be prepared for high living costs if you were to live here.

Traffic scenes in major cities aren’t a new topic, and Chicago is no different. It comes of no surprise that Chicago is one of the most congested cities in the world.

And according to a new report published by a transport analytics firm, Chicago currently ranks third in the country in terms of heavy traffic. Heavy traffic is affecting the lives of thousands of Chicagoans in a very bad way so it’s better to be prepared for all the hustle.

Although there are four seasons, winter tends to be longer than other seasons. The Windy City can have brutal winds at times. You will also experience the typical Midwestern seasons when living here, which means the summers are hot and humid, while the winters are cold and snowy.

5. Your Neighborhood Defines You

Each well-defined neighborhood offers its own set of cultures and personalities to enjoy. The northern side is all about jazz and baseball while the west is about Mexican culture. The Downtown area is where all of the top attractions happen to be, while the Southside features museums and monuments.

Chicago is a unique city with lovely people. Yes, crime does seem bad but with over 2 million residents, any other city would have that problem too. It isn’t as bad as it seems from the outside.

13 Pros and Cons of Living in New York

12 Pros and Cons of Living in Oregon

14 Pros and Cons of Living in Canada