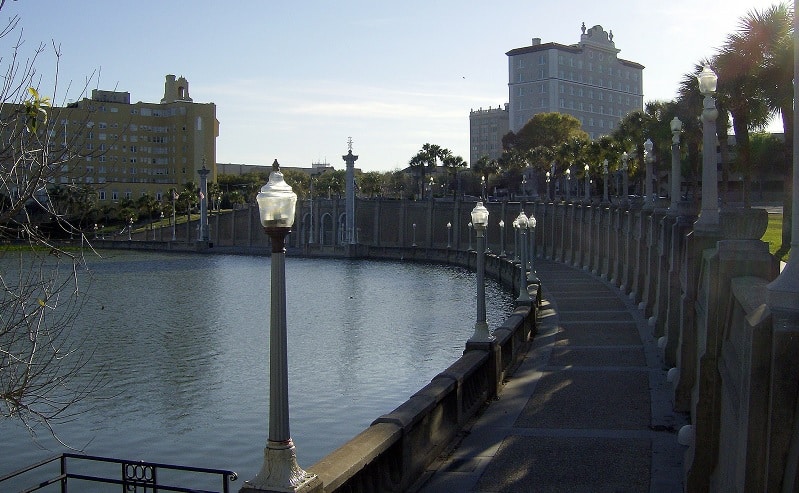 Lakeland, in the county of Polk, Florida, is located along the I-4 corridor between Tampa and Orlando.

The city is filled with history and surrounded by gorgeous natural scenery. Most noticeably, the 38 lakes that it gets its name from, and of course, that beautiful sunny Florida weather.

There is a great sense of community in Lakeland, This is especially true in Lakeland’s downtown area, nicknamed “Lakeland’s Livingroom.”

Pros And Cons Of Living In Lakeland Fl, At A Glance:

The Pros Of Living In Lakeland Fl

The job market in Lakeland has grown by 2.9% and, according to predictions, will continue to grow.

The city will grow in the next ten years. its anticipated to grow a whopping 40%. This makes opportunities for employment for potential residents very attractive.

The average cost of living in Lakeland, in terms of housing, necessities, utilities, and so on, is low. This is when compared to the average in the rest of the state of Florida and the national average. The sales tax is only 7.0%, and there is no state income tax.

Whether you are looking to rent or buy a property in Lakeland, you will find that the housing market is also relatively low when compared to the rest of Florida by approximately 30%. These two combined make it a very affordable place to live or retire.

Voted one of the best places to retire.

This is due to Lakeland’s being in the center of Florida, as well as being very closely located to many fantastic healthcare facilities and providers, either in Lakeland itself or a very short drive away.

As stated in the previous section, there are no state income taxes. In addition to this, the state of Florida does not tax social security income, and the property taxes are low.

Because of the mostly sunny weather, there is ample time for senior citizens to get out and stay active while enjoying the natural beauty of Lakeland.

With Lakeland in the middle of the state, there are multiple options for visiting the tourist attractions Florida is known for. Along with these destinations come some fantastic places to eat along the way.

Tampa is just 40 minutes away, Orlando is just 60 minutes away and the drive to Walt Disney World is just 42 miles. Driving to the beaches around Florida will take about 1.5 hours.

The history of Lakeland can be traced back to the 1870s. The city boasts seven heritage sites as well as the largest collection of Frank Lloyd Wright architecture in the world. This rich heritage gives Lakeland a true sense of history and community pride.

The 38 lakes that are in and surround the Lakeland region are its namesake and contribute to its breathtaking natural beauty. This allows residents to take part in water sports such as water skiing, fishing, swimming, and paddle boarding.

There are several stunning natural reserves, such as the Circle B Bar Reserve and the Hollis Botanical Garden, which make for spectacular hiking, trail runs, and scenery.

The Cons Of Living In Lakeland Fl

The state of Florida is known for devastating hurricanes, tornadoes, flooding, and thunderstorms that pose serious natural disaster threats for Lakeland and its residents. The city does provide in-depth guides and information on alerts, shelters, emergency checklists and hurricane kits.

Another downside of the very humid weather in Lakeland is that it is an ideal breeding ground for pests such as mosquitos, termites, fleas, ticks, webworms, chinch bugs, crickets, and grubs.

Lakeland residents are highly advised to have regular and ongoing pest control measures put in place.

On a side note, because of the large number of lakes in and surrounding the region, residents must also be aware of the wildlife, such as alligators, popping around for unexpected and unwanted visits .

Because of the limited amount of public transport available in Lakelande, most residents rely on cars to commute and run errands.

The city is located on Interstate 4 which is a major route to Tampa and Orlando. This makes Lakeland a transport hub, and Interstate 4 can have very heavy traffic throughout the day. It is heaviest during the morning and afternoon peak traffic hours

In addition, in Lakeland itself, West Memorial Boulevard that runs east-west through the downtown centre of Lakeland is one of the most congested routes during peak hour traffic, so it is advised to find alternative routes.

The rate of property crime in Lakeland is much higher than the US national average, with its rating being 66.7 versus the national rate of 35.4. This makes Lakeland prone to crimes such as car theft, robbery and burglary.

The crime rate also is partly due to the unemployment and poverty rates of Lakeland being higher than the national average.

Lakeland is considered to be a city that is dependent on the use of cars as the main source of transport for its residents.

There are bus services that run but are not always available and the city does not have a good walkability score.

Things To Consider about living in Lakeland Fl

We have covered the major pros and cons of living in Lakeland Fl, now let’s have a look at a few more commonly asked questions about Lakeland.

Are there any sports I can go watch?

Oh yes! You can watch the Lakeland Magic play basketball. You can also catch the Tropics SC play soccer at the RP Funding Center. This center is used as a multipurpose entertainment center.

Education in the area is good and ranks high on national and statewide levels compared to other cities. These rankings factor in public school graduation rates, enrollment rates, teacher to student ratios, and student and parent reviews.

Are there any landmarks in the city?

Be sure to visit the Polk Theater and the Polk Museum of Art. The theater features musical and theatrical performances, and live music. The museum features classical and contemporary art from renowned artists that include Rembrandt, Van Rijn, Andy Warhol, and Pablo Picasso

What are some demographics of Lakeland?

Lakeland has had a great consistent growth of new residents over the past 5 years and is rated as one of the fastest-growing cities in the nation.

Lakeland is considered to be mostly Republican but ranks highly on the diversity scale.
The city is filled with many young people and young families. The average age in the city is about 41 years old. There is also a thriving retirement community.

Lakeland could be an ideal place to either retire or settle down with a family with an affordable cost of living. As with all new cities, there are many things to consider.

On the whole, Lakeland offers much in the way of community, history and nature. It is centrally located and has some of the best weather in the country.

It’s up to you to decide if those things are worth having to deal with the possibility of dangerous weather conditions, crime and congestion.