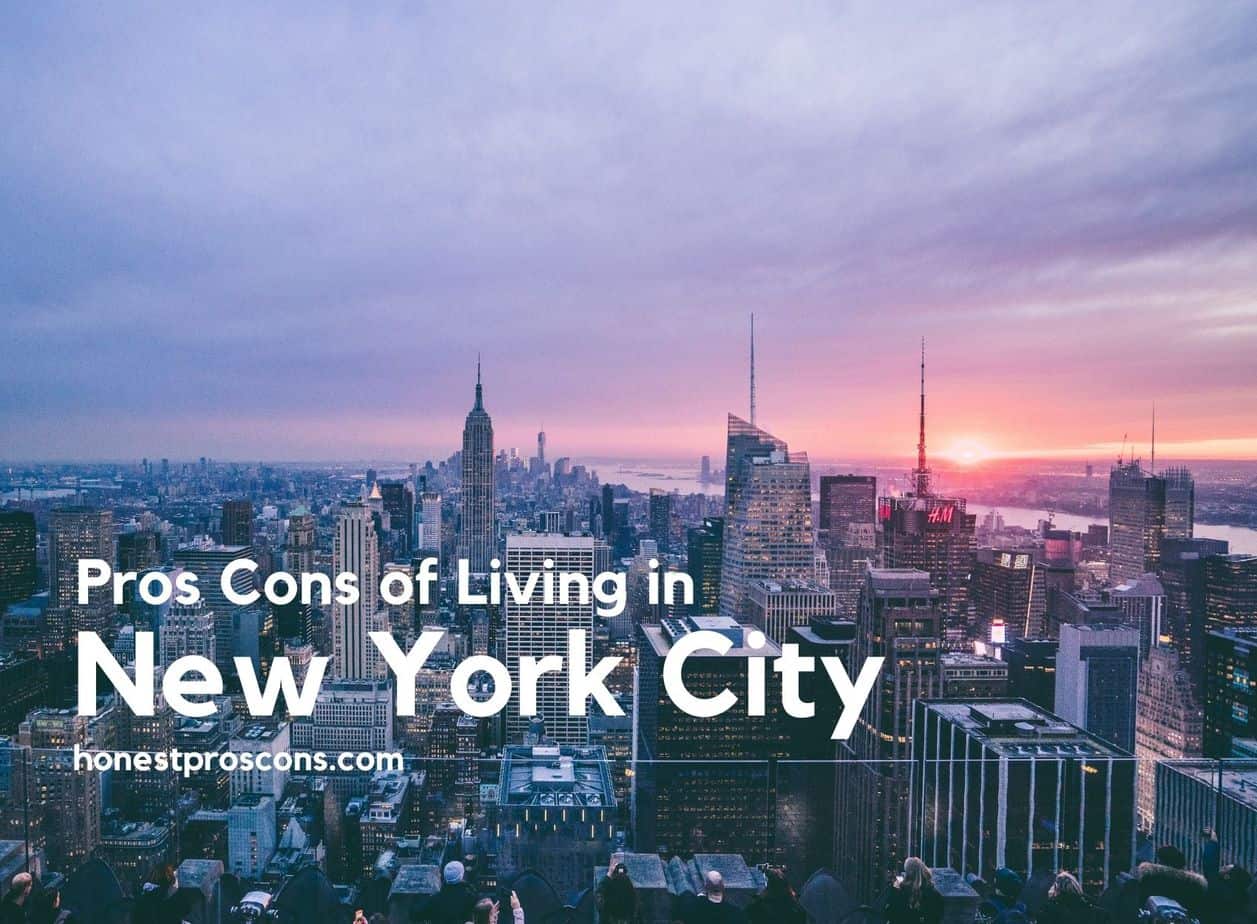 New York City has been described as the cultural, financial, and media capital of the world, significantly influencing commerce, entertainment, research, technology, education, politics, tourism, art, fashion, and sports. Home to the headquarters of the United Nations, New York is an important center for international diplomacy.

It is a haven for people trying to make it big and a home to plenty of major celebrities. Here, you can find a way to make yourself a great living. Being one of the best cities in the world, New York has its share of fame. It has its perks but there are also some negative aspects to living in New York.

Listed below are the Pros and Cons of Living in New York.

Pros of Living in New York

There is always something to do in New York. Always some event to attend, some party to join, new interesting people to meet. Bringing this up first in my list of pros because it’s New York baby!…couldn’t go any longer without bringing that up..

You will meet people from all different corners of the world with such amazing perspectives on life. Not to mention, almost everyone is friendly and will help you thrive in yourself. The expressions, the interactions of New Yorkers will let you learn and experience quite a lot. Also, the way they carry themselves as a part of the New York culture is phenomenal in itself. So if you’re a people’s person and looking for some socializing, New York is the way to go!

2. An Explosion of Opportunities

“If you can make it here, you can make it anywhere” is too real for New York City, no matter where you come from. If you’re trying to make it big and going for entrepreneurship, this city will help you with its web of connections and ever-bustling social life. Almost everybody knows somebody here and you won’t have such a hard time finding an audience and clientele if what you’re selling is good enough.
Also, career-wise New York city has an abundance of the greatest titles in tech, marketing, apparel, journalism, fashion, sports and the list goes on. So if you don’t have a plan or a purpose set, there’s a job still waiting for you.

Coming to the infamous subways of New York, a subject of many movies. It will prove to be very efficient for those of you who are anxious about driving. Despite the crowd and the sometimes noticeable smells, the New York City subway is still an escape from the hassle of traffic. The system works in a well-organized schedule so you can mould your time into the time frame of the subway authorities.

Now onto the entertaining part, you will be travelling with people from all sorts of standings and backgrounds. From businessmen to labour workers, everyone is on the same level inside the subway. It can be a fun way to learn human behaviour and/or to have an interaction with different people.

4. Fit for the Night Dwellers

There is always something going on, always an open business, always more than a few people wandering under the night sky of New York City. This may sound of little significance but just wait till it’s past midnight and you’re craving for a pizza. Or if you’re an impulsive person and make last-minute decisions for trips or rides around the city, New York won’t fail you, as “The city never sleeps”.

You’ll find yourself in a lively environment, full of open bars and cafes and other fun places any hour of the night. The art and music scene of New York City reflects through the night too. So it’s an amazing place to be if you’re searching for adventure and aliveness throughout all hours.

Now, who wouldn’t fall for a place serving all types of cuisine, flavours, fusions, concept, and traditions. The New Yorkers take their food culture quite seriously and also they love to experiment and explore with new recipes and presentations. Due to the diversity and the richness in culture, you are sure to get the best-of-the-best when it comes to delicacies in New York. Any dish you want, be it Chinese, Mexican, Italian, etc. will be served at your doorstep any time of any day.

The options aren’t limited when it comes to pricing as well, it can get from a $5 street food to some pricier French cookery. Whatever it is that you’re looking for, from mind-numbing spices to high sugar rush desserts, you’ll find it all ready and served in New York.

With chick flick movies and fashion runaways, all centred around the streets of New York, you’ll see some of the best-dressed people in the whole of the US. So if you’re someone who’s into fashion, you’ll have the best time of your life just wandering around the streets checking out people who follow the trendiest dressing styles.

This city is sprinkled with parks at different cuts and corners. And they can be counted as pleasant escapes from life in a concrete jungle. The central park being a major attraction, there are several others that will transcend you to a world of inner peace. Any time you want to talk a walk or go for some fresh air, they are right there.

Cons of living in New York

1. The 7th Most Expensive City In The World

The costs of living in New York might be disturbingly high and if you have a paycheck of under $2,000 a month, things might get a little rough for you here.

The average price for a 3-bedroom apartment in Manhattan is $4,950, and $3,100 for a 1-bedroom. This face is unsettling in itself but can cut costs by adding one or two roommates.

For food and personal care, if you cook at home and make sure to avoid the fancy restaurants, it could cost you anywhere between $300 – $400, and another $250 – $300 for transportation, cell phone, internet, utilities, and any other miscellaneous expenses.

With brutally cold and long-lasting winters, the weather situation in New York isn’t exactly the city’s fine point. Winters in New York can last up to April with constant snowfalls and very lowering temperatures. A calm and clear morning might just get windy and frigid by the afternoon. Summers too, aren’t as ideal as it can be sticky hot and humid.

There’s almost always a heavy traffic situation and you will barely be able to drive. Also more than often you will come across some rerouting due to construction works taking place. The whole situation can get frustrating at times but sooner than you come to know, it becomes a part of your New York lifestyle.

Being a hardworking city, everyone is a workaholic here. Most people come here carrying huge dreams and they hustle hard to make it work. And it shows, too. You will feel a little backward here no matter how diligently you work because everyone else seems to be doing the same, if not better.

Unlike the glamour portrayed in movies, you will find the streets scattered with garbage and dirt, inhabiting tons of homeless people. The subway too, is littered and shelters rats among other such animals, hence getting the name “underground zoo”.
You will have to carry a hand sanitizer before touching anything questionable around the subway area.

No matter where you go in New York, you will have to stand in a line to get to your turn. Waiting is a part of normal lifestyle for the New Yorkers as there are crowds accumulated at every corner, for food, for galleries, you get the idea.

Life in New York is exciting and will keep you on your toes for the most part. Also, if you want to make a name for yourself this is the best place to go. However, before you jump in you will want to consider your income source and be ready to face a crowd for the most part of your days. People still love it in New York City and as it’s the city that never sleeps, who knows maybe you’ll find your purpose here.