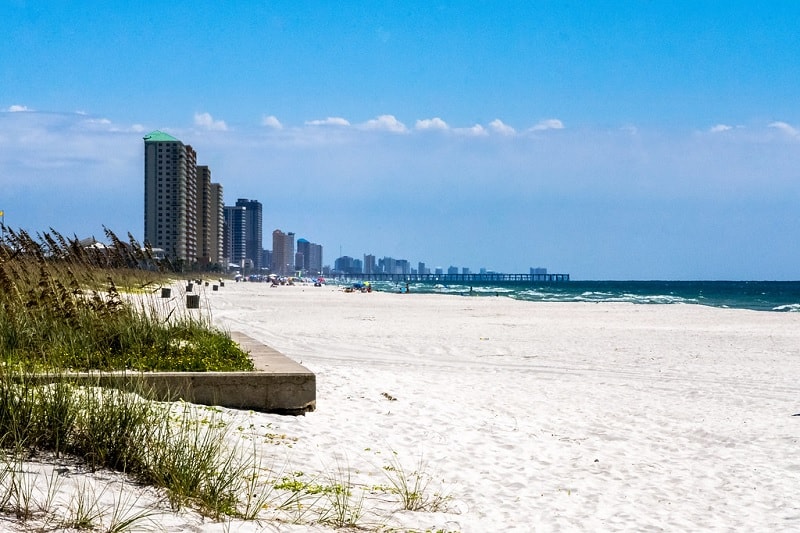 In Bay County, Florida, Panama City is an all-year-round holiday hotspot, but recently it has become a popular choice of residence. Its favorable climate, pristine waters, sublime coastline, and abundant wildlife have attracted young adults to this small town of 27,347 residents.

Panama City boasts suburban, affordable living and a friendly environment, making it ideal for people wanting to start a family.

If you are considering moving to Panama City, it’s important to be aware of the pros and cons of living there.

Pros & Cons of living in Panama City, Florida At a Glance

The pros of living in Panama City, FL

So you’re thinking about moving to the scenic beach destination of Panama City?

The cost of living in Panama City is average in the United States and low in Florida. It is less expensive to live in Panama City than in New York or San Francisco.

The average household income in Panama City is $63,912, which is high in the United States and high in Florida.

Overall, housing costs, groceries, transportation, utilities, healthcare, and other goods and services are much cheaper than in most other cities in Florida. However, certain areas are more costly than others.

The sales tax rate is 7% in Panama City, while last year’s average property tax paid was 0.7%. Rental costs in Panama City for one-bedroom, two-bedroom, and four-bedroom apartments are moderate. Renting a three-bedroom is slightly more expensive compared to Florida.

Panama City has a laid-back lifestyle with 27 miles of white sand beaches, deep green waters, and beautiful nature reserves. It is absolute bliss for outdoor lovers throughout the year. You can enjoy the beautiful scenery of wildlife or go on an adventure.

There are plenty of watersports available to keep you occupied, like scuba diving, fishing, snorkeling, paddleboarding, and parasailing, to name a few.

You can witness sea turtles visit the shores to nest and lay their eggs during April and November. Remember, it is illegal to disturb a sea turtle or its nests.

Panama City is also home to an impressive population of dolphins. You can explore the vast wildlife on dolphin tours, jet-ski, sunset cruises, or charter a boat.

Panama City falls within the tropical monsoon climate, and residents enjoy summer all year round, followed by a rainy season and then a fairly short dry season.

Panama City has the highest average annual precipitation in the United States, at 63.6 inches per year.

Overall, the area provides good educational facilities and is highly ranked at national and state levels when compared to other cities.

Panama City has a booming social scene. Everyone can enjoy something from the vibrant club life to the attractions and casual restaurants.
You can explore a variety of bars, pubs, and grills to just grab a drink, relax, or eat.

Panama City is synonymous with beach bars where you can enjoy a late-night snack, some cocktails, and live music.

You can always go shopping at night or even catch a movie at the cinema; the opportunities are endless!

The cons of living in Panama City, FL:

Now let’s explore some of the reasons why living in Panama City, Florida, might not be ideal for you.

Sadly, Panama City has a higher crime rate than other suburban cities, both nationally and statewide. On a daily basis, the population is concerned about crime and safety.

According to Dwellics, Panama City has the highest violent crime rate in the United States. Property and vandalism crimes also rank higher than in other states. Arson crimes in Panama City are low compared to other areas.

Poverty is a significant issue in Panama City, with an overall poverty rate of 21.64%. The poverty rate among full-time working people for the past year was 3.76%. For part-time workers, it was 24.90%, and for the unemployed, it was 29.72%.

Panama City has seen a consistent decline in population in the last five years. This is not a major concern, but it is something to monitor.

The decline in a city’s population can result from several factors or one critical element. The general reasons people move away from an area include short-term incidents like pandemics, food shortages, conflicts, or long-term demographic patterns like resident migration or a low birth rate.

These reasons can also cause a domino effect, which causes a further decrease in population growth, resulting in a poor economy.

When it comes to natural disasters, Panama City does have its fair share of possible occurrences. Sixty massive tropical storms have hit it since 1871.

The risk of hurricanes, severe storms, and tornadoes occurring in Panama City is much lower than the average in all of Florida. But this is still higher than the national average.

Panama City has an upper-middle-class economy with a background of low inflation.
The Panama City economy is predominantly based on the services sector, accounting for 80% of its GDP.

Despite Panama City’s job market increase of 2% over the last year, its future job growth is predicted to be 27.2%.

You may struggle to communicate with the locals in Panama City, if you are not fimilar with Spanish. However, this does depend on your location. The majority of the people speak Panamanian Spanish, also known as Castilian.

Let’s look at some of the frequently asked questions about Panama City, Florida.

Is Panama City, Florida a good place to live?

Panama City is considered an amazing location to live in because it has so much to offer. Some of its attractive features include:

Is Panama City, Florida safe to live in?

Panama City is ranked in the 41st percentile for safety. This means that it is safer than 41 other cities.

The crime rate is 30.63 per 1,000 people per year in Panama City. Residents believe that the northeast part of Panama City is the safest.

Is it expensive to live in Panama City, Florida?

Not at all. Despite Panama City being the most expensive area of Panama, as it is the world capital on water, the cost of living is low. It is ideal for young adults looking to start a family.

Is Panama City, Florida, is it a good place to retire?

Panama City is the best place to retire because of its easy residency laws, friendly people, and plenty of expats.

It is like being on holiday full-time with its beautiful beaches and suburban living.

The starting price of houses in a safe area in Panama City is approximately $300,000 for a three-bedroom house. However, prices depend on a lot of factors.

Panama City could be just the place for you if you are looking for a favorable climate, an easy-going lifestyle, and a family-oriented scene.

It features plenty of wildlife stunning natural surroundings and is well-connected to major cities like Miami.

If you are happy to overlook potential natural disasters and a high crime rate, then Panama City is a beautiful place to make a home.