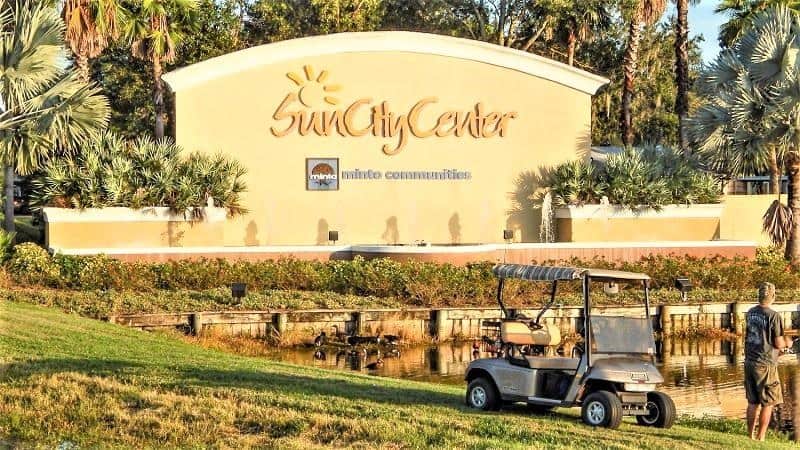 Whether you are looking to move to Sun City Center or you just want to know about the city’s livability, we’ve put together a list of pros and cons for you. It’s also essential to know some of the negatives about living in Sun City Center.

Moving to a new location is a big decision, so it’s essential to know as much as possible about Sun City Center.

Pros of living in Sun City Center at a Glance

Cons of living in Sun City Center at a Glance

The Sun City Center provides a decent retirement life to its residents at an affordable price. Below, we’ve listed the reasons why Sun City Center is a great place to live.

Sun City Center spends the majority of the year in sunny weather. The community also receives 54 inches of rain which is double the national average. This perfect combination of rain and sun keeps the region lush and green.

The summer season gets high humidity, with temperatures reaching the 90s. However, the community’s winters only reach 60 degrees which keep the area feeling cool and dry.

The center offers plenty of facilities and activities to its residents, so it might surprise you to know that it has affordable living costs for each resident. With the Sun City center, you can either rent or own a home in the center at a lower price than most places in Florida.

Designed for All Your Needs

The Sun City Center was designed to meet all the needs of its residents within the community limits. This design means that residents could, in theory, survive without needing to leave the center. The community consists of churches, a post office, restaurants, shops, health facilities, and many other facilities.

This self-contained retirement community has plenty of activities to keep its residents active. The Sun City Center has a modern fitness center, excellent softball facility, an indoor pool, and outdoor pools.

The Sun City Center has big and small rooms that residents can use for theater productions, card games, computer labs, meetings, dances, and so much more. The community also has more than 60 clubs for fun, dancing, arts & crafts, and fitness.

Because the Sun City Center is a golf cart community, it is legal to use golf carts on the roads. There are parking spaces just for golf carts at most stores in the community. Golf carts are typically cheaper to buy and maintain than vehicles.

The Sun City Center is conveniently located less than 30 minutes away from the southeast of Tampa Bay. The community’s location will give its residents easy access to Tampa and its amenities such as hospitals, the airport, and entertainment.

The Sun Center City is also approximately an hour away from Disney World and 1.5 hours away from Orlando. The community is also only 15 minutes away from Apollo Beach in Tampa Bay.

Bradenton Beach is also 45 minutes away from the Sun City Center and Siesta Key, which is approximately an hour away.

Sun City Center will provide ample opportunities to escape into nature. There are plenty of hiking clubs for residents to join.

On the southern edge of the Sun City is the Little Manatee River State Park. The park is a 2400 acre preserve consisting of some of Florida’s most pristine swamp habitats. There are over 18 miles of trails, a campground, and even full amenities.

On the community’s northern edge, residents can visit Bullfrog Creek, Mitigation Park. This park is 1600 acres and has plenty of undeveloped land to the east and southeast of the community.

As mentioned before, the Sun City Center was designed to provide its residents with everything they need. This design definitely includes providing for their medical needs.

The community has the South Bay hospital inside the community, and several doctor officers are scattered in the area surrounding the hospital. However, the hospital isn’t one of the top-ranked hospitals, but it can provide adequate service for emergency and general needs.

There are numerous highly-ranked hospitals located in Tampa Bay for any unique medical care that includes Tampa General, St. Joseph’s, and AdventHeath.

In Sun City Center, there are low crime rates. It’s lower than the national average crime because no young people are causing trouble. The community also has a tough neighborhood watch team with approximately 1200 volunteers.

Sadly, not every place is perfect, and the Sun City center is no different. This section will outline some of the cons of living in Sun City Center.

As a resident living inside the Sun City Center, you will need to follow the rules of the Homeowner Associations. Some of these rules might seem harsh, leading to the feeling of being under constant scrutiny.

Grandchildren can visit but can’t live with you

The center’s policy does not allow for grandchildren younger than 18 years old inside the community. So if you’re someone who loves to have their grandchildren around alot, then Sun City Center might not be the grandchild-friendly option for you.

The biggest reason for this policy is that children are considered troublemakers, and the senior residents might consider the young children disturbing. However, grandchildren older than 18 are welcome to visit residents for less than 30 days a year.

During the last two decades, the Sun City Center has experienced an exceptional amount of growth. The center started as a slow-paced rural community before it grew into a community with a more urban feel.

A majority of the commercial development took place along Route 674, which is the only major road within the limits of Sun City Center. These establishments are the main attraction for outside visitors.

Unfortunately, the Sun City Center community lacks diversity. According to the site Data USA, in 2019, the center had more than 24 000 residents with an average age of 71.5 years old. The average household income is $50 613.

One of the most significant negatives about living in the Sun City Center is the high chances of hurricanes. Tampa Bay city is one of the cities with a high probability of experiencing a hurricane attack.

This region has an 11% chance of being hit by a hurricane every year. Luckily, the Sun City Center is located five miles from the coast. This location will lead to more minor damage, but the hurricane might have a slight impact.

What is Sun City Center, Florida?

Located just south of Tampa, Sun City Center is a 17-square mile age-restricted for people older than 55 years old. Currently, the center has a population of 23 000 residents with an average age of 72 years old.

The Sun City Center has been ranked as one of the top Best Places to Retire in America. The community consists of apartment buildings, single-family dwellings, townhouses, and duplexes. The community also has its own nursing home facilities and hospital.

The center uses a traditional police force and a volunteer neighborhood watch team to keep the community safe and secure.

What Does it Cost to Live in Sun City Center, Florida?

How Far is Sun City Center, Florida from the Beach?

The Sun City Center is conveniently located between Tampa Bay and Orlando. Tampa Bay has Apollo Beach, only 15 minutes away from the center.

Bradenton Beach is an excellent choice for anyone who wants to dip their toes in the Gulf waters, and it’s 45 minutes away. There is also Siesta Key which is only an hour away.

Sun City Center has plenty to offer people older than 55 years old. The community provides medical facilities, entertainment, and low-cost housing. The residents can live active lives surrounded by nature and have all their needs taken care of.