Thinking about relocating to Tallahassee, Florida, but you’re not sure if it’s the right place for you? After all, moving to a new city is difficult, mainly if you have never visited the city before. No one wants to move to a new town and then get faced with a nasty surprise in the future.

To help you avoid this and make the right decision, we have included a list of the positives and negatives of living in Tallahassee, Florida. Get ready to learn everything you need to know about the Sunshine State’s capital.

Pros and cons of living in Tallahassee, Fl at a glance

Pros of living in Tallahassee Fl

Tallahassee is well-known as the home of the rolling red hills and the hilliest city in Florida; however, this city has a lot more to offer. Including this list of pros of living in Tallahassee, Florida:

If you enjoy spending time outdoors, then Tallahassee may be the place for you. With many parks, trails, and vast amounts of natural scenery, it will be easy to escape the hustle and bustle of city life.

In Tallahassee, you will be able to find a sport to play for any season in this city. A few sports for people who enjoy participating in a game include basketball, volleyball, soccer, golf, softball, tackle football, and many more.

There is also a wide range of water sports that you can choose to participate in, like competitive swimming, synchronized swimming, and aquatics.

On the other hand, if you prefer watching sports games live, there are a few competitive sports teams that you can catch, including Tallahassee Scorpion, Tallahassee Thunder, Tallahassee Tiger Sharks, and many more to choose from.

Proximity to other cities

One of the pros of living in a city in Florida is that you are never too far away from other towns. Tallahassee is only around 166 miles from Jacksonville, 2 hours and 30 minutes away via a car.

Tallahassee is also not too far away from other cities in different states like Atlanta, Georgia. This city is only around 261 miles, a 4 hour and 24-minute drive.

Tallahassee has a buzzing nightlife. One of the primary reasons for this is because this city is a college town filled with young adults. The city plays host to plenty of restaurants, bars, and clubs like Eve on Adam, Red Rocks, OverUnder Bar and Lounge, and more.

Tallahassee ranks as the 8th largest city in Florida, with a population of 198,758. This city’s population has been continuously growing over the past few years. Since 2000, the city population has increased by 29.1%.

One of the best factors about living in Tallahassee is the city’s beautiful weather. This city has 233 sunny days, which is more than the nation’s average number of sunny days, which is 205. This is great because this city can also be rainy, with around 59 inches of rain a year, which is a nice break from hot days.

Tallahassee is a city in the Leon Country known as a strong liberal county. 63.3% of the citizens in Leon County voted for Democratic, 35% voted Republican, and only 1.5% voted Liberal.

Tallahassee is a popular choice for people who are looking to retire. One of the main reasons for this is the city’s low cost of living. Another reason why this city is excellent for retirement is because of its slow and laid-back lifestyle.

There is a very diverse community in Tallahassee. The majority of the demographics of this city include 56.23% White citizens, 35.02% African American citizens, and 4.55% Asian citizens.

There are fewer men in the city than there are women; 52.92% women and 47.08% men in Tallahassee. The average age in this city is approximately 27 years old.

All cities in Florida, including Tallahassee, don’t have to pay state income tax. However, citizens will have to pay sales tax, a rate of 6%, and property tax.

While Tallahassee might not be the safest place to live, this city is home to many pretty safe neighborhoods. A few of the best neighborhoods in Tallahassee include Beton Hills, Killearn Estates, and Frenchtown.

Rush hour in Tallahassee is usually around 7 to 9 in the morning and 4 to 7 in the night. Other than that traffic is not bad in this city. StarMetrois the most popular transportation service in the city. This bus service operates during the week and even on weekends.

While the health insurance in Florida is one of the more expensive in the country, with an average cost of $7,389, in Tallahassee, there are plenty of much more affordable health insurance options to choose from to suit your needs and budget.

Cons Of Living In Tallahassee Fl

While Tallahassee has many pros that could make this city your dream home city, there are also cons that you should consider before making this big decision. Here is a list of cons of living in Tallahassee, Florida:

While Tallahassee is home to a wide range of parks and museums perfect for families, this city is still commonly referred to as a college town. This usually means a busy nightlife with young adults, which is not the best place if you are ideally looking for a more family-friendly area.

Tallahassee has one of the highest crime rates in almost any other city in the US. This city is only safer than 8% of other cities in the country. Approximately 39 in every 1,000 citizens in Tallahassee are a victim of crime. These crimes include both violent and property crimes.

While there is a low chance that an earthquake will hit Tallahassee, there are other natural disasters this city has been a victim of. Tallahassee has experienced 67 floods, 11 tropical storms, and six hurricanes.

Tallahassee is not the safest place to live in Florida or the US in general. This is because of the city’s high crime rates. In 2021, there were 1,534 violent crimes and 6,075 property crimes, with 7,609 crimes reported in the town.

Most people living in Tallahassee are currently renting their homes; this includes 51.9% of the city’s population. This is because the houses in the town are pretty expensive. The average price of a home in Tallahassee is around $220,100.

Even though Tallahassee is home to many fun activities for families like museums, sports activities, and parks, this city is still well known as a college town. This means that many college kids are partying and spending late nights, making this city not the best place for families.

Tallahassee is a vibrant and diverse city to live in, which is excellent for young adults. Some pros of living in this city are the low cost of living, beautiful weather, exciting nightlife and more.

However, it is essential to consider the cons of living in this city, especially its safety and high crime rate.

To live in Tallahassee, you need to think about all the pros and cons of living in the city. 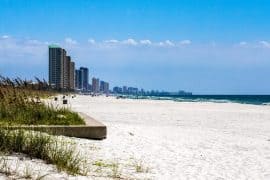 What Are The Pros & Cons Of Living In Panama City Fl?