Commonly referred to as the “Birthplace of a Nation”, the state of Virginia has its history closely entwined to that of the United States. Named after England’s Virgin Queen Elizabeth I, this land is truly rich in history; the first Thanksgiving in North America took place in Virginia of all places back in 1619.

Pros and Cons of Living in Virginia 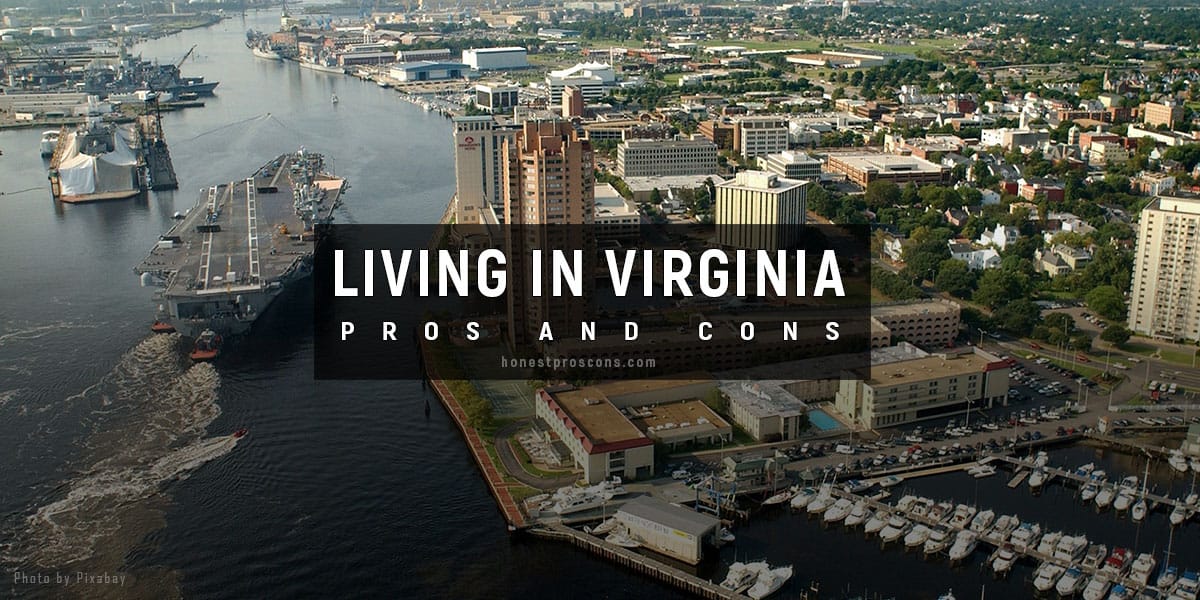 The history of the Commonwealth of Virginia began at the end of the 16th century when England decided to start colonizing North America. Initially, Virginia covered the entire coast, stretching from South Carolina to what is now Maine.

Including the end of the Revolutionary War and the Civil War, “The Old Dominion” has seen notable events in history occur within her borders. Since eight of the US presidents were born there, the state got its nickname the “Mother of Presidents”.

American ancestors have been calling Virginia their home for three centuries now with its unparalleled beauty being the reason for the initial draw. While the state is much different today than it was 300 years ago, it is still a gem with over 55,000 people moving in to settle down each year. I mean, to find a beautiful State with all four seasons and the perks of both the beaches and the mountains within a five-hour drive either way is pretty great.

Undoubtedly, Virginia is a great state to call home. But, like every other place, it has some not so great things about it, too. For a detailed view, let’s take a took at the pros and cons of living in Virginia.

Pros of Living in Virginia

What is it like to live in Virginia? Below are some of the advantages of living in Virginia

The health care facilities in Virginia are considered top of the line. There are more than 100 hospitals in Virginia, and 21 meet U.S. News’ highest standards. So, god forbid, if you get a bad case, you’ll be in great hands.

The education in Virginia is top-notch. There are some amazing schools there, starting at the grade school level. If you want a world-class education for your children without a high price tag, VA would be a great choice.

If you’re a resident, you also get the opportunity to have discounted access to one of the best universities in the country – the University of Virginia.

Virginia is drenched in U.S. history. You get a chance to tour the homes of Thomas Jefferson, George Washington, James Madison, William Henry Harrison, James Monroe, Woodrow Wilson, and John Tyler. It’s like taking a walk inside a history book you never opened.

Virginia ranks among states with the lowest crime rates. According to the data from the FBI, the commonwealth had 200 violent crimes and 1,666 property crimes per 100,000 inhabitants in 2018.

Although a quarter of the folks who live in VA work for the government, it’s job market has much more to offer. Virginia’s unemployment rate is below the national average, at 3.4%. There is also a fair number of growing career fields out there worth exploring that could offer a good wage.

Unlike some of the other places you could choose to live in the United States, Virginia is neither red nor blue. It is consistently a swing state in the presidential elections that occur every four years. In American politics, the term swing state refers to any purple state, i.e., could reasonably be won by either the Democratic or Republican presidential candidate. These states are the most targeted by both major-party campaigns.

Virginia is home to a variety of natural beauties. Yes, it has thousands and thousands of miles of coastline, but the ocean isn’t the only water that flows in Virginia. The state is home to four major rivers that flow into the Chesapeake Bay. Not to mention, over 217 miles of the rolling green Blue Ridge Mountains run through Virginia.

The fall colors are surreal in this gorgeous state. To get the full experience, just head to Shenandoah National Park during the peak weekend of the season.

The military presence in VA is extensive with 27 military bases currently operating within its borders. At least one base of every branch is in operation right now. More than 60,000 military veterans live in Virginia Beach alone (which is over 10% of the entire city population). So you’re bound to feel a lot safer living here than in other parts of the country.

Virginia is home to exceptionally polite people. People are likely to greet you when they pass you on the street, whether they know you or not. This isn’t very much like some of the larger Northern states. You’ll see friendly smiles everywhere. You’re likely to feel at home even when on a visit.

According to the 2019 edition of Rich States, Virginia is ranked 14th of the 50 states in the US. Initially, Jamestown, the first capital of the settlement was founded for the sole purpose to increase the wealth and power of Britain. They’ve recovered pretty well from the 2008 tumble and if you’re ready to start making money, you might want to live here.

Cons of Living in Virginia

Like every other place on the planet, there are some cons or disadvantages of living in Virginia.

Top 10 Worst States for Income Tax in 2015″ ranked Virginia #7 on the GOBankingRates list. According to the Tax Foundation and other sources, the overall burden of state and local taxes is higher for Virginia residents, than it is for people living in most other states.

Traffic in Virginia can be horrible, particularly around the bigger population centers. The average traffic jam can last 33 minutes and cover six miles, and driving into D.C. from Virginia can mean sitting in traffic for hours, depending on the time and the travel distance. So, it is better to check the traffic updates before leaving the house.

3. Charged with a Fine for Swearing

It’s illegal to curse at another person in Virginia. Even if they’re being real trash, anyone who curses in public is deemed guilty of a Class 4 misdemeanor and fined up to $250. You’ll want to pay extra attention to the signs that say do not curse if you’re thinking of moving here.

Although the weather in Virginia is usually mild and temperate, it can also be unpredictable. You can experience a shift in temperatures of more than 30F in a single day. Unless you live right near the coast, it can get pretty hot and sticky when you reach the summer. Winters tend to be mild, but snowfalls occur in the upper elevations more than anywhere else.

Virginia is home to 4 nuclear power plants. Two are located roughly 40 miles northwest of the major city of Richmond and two other plants are located near Virginia’s Atlantic coast about 17 miles from the city of Newport News. Virginia also harbors one of the largest naval facilities in the world where nuclear-powered aircraft carriers and submarines can be docked.

The cost of living in Virginia is higher than it is in most other states. Of course, there are communities with a lower cost of living, particularly in country areas, but if you’re moving in for a job, you might end up paying a lot for a place to call home.

Virginia is a breathtaking state, whether you’re drawn to the beautiful scenery, the rich history or the robust economy, you’ll find a lot to adore about your new home.

However, before you move in, you probably want to calculate how your finances will be affected. Not that the challenges are null, but it is one of the better US states to settle down.