Entitled after George Washington, Washington is a beautiful state situated in the United States’ remarkable Pacific Northwest region, which before 1846 was a Western Territory under the British nation. With the Pacific Ocean at its western edge, British Columbia at its North, Oregon to the south, and Idaho to the east, Washington State was registered as a 42nd state to the Union in 1889. 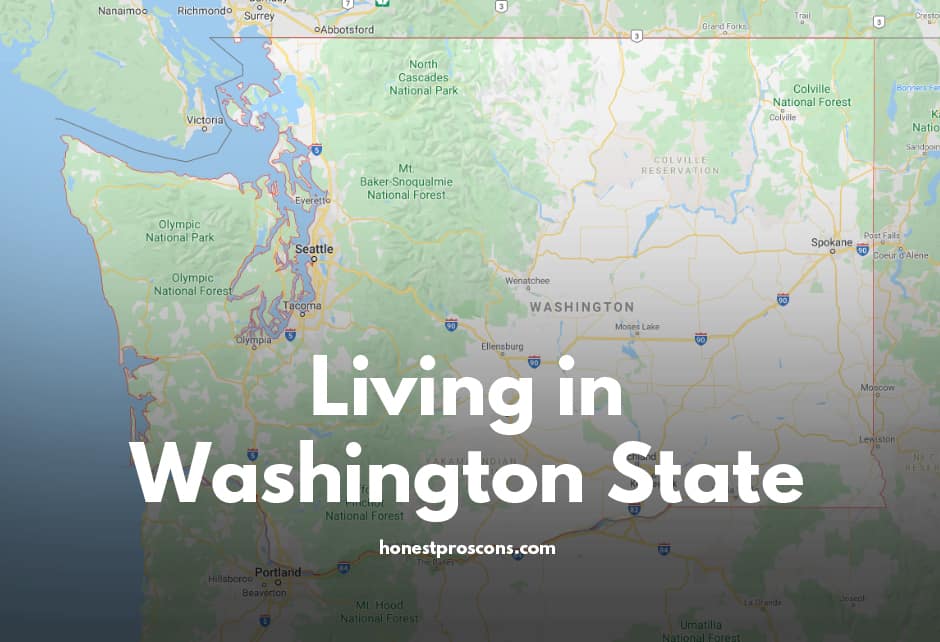 With Olympia as its capital, Washington is the United States’ 13th most crowded state, where the majority of its population reside in Seattle, its largest city. Maybe, because of its opportunity for an excellent career or its natural beauty, or due to the presence of some of the United States’ largest companies, people move to this state irrespective of its relatively high cost of living and crime rate.

In association with its expense and crime rates, this state is also the home of several natural hazards like heavy tectonic plates risking the region with earthquakes and five live volcanoes. However, if you are attracted by its rapidly growing GDP and are determined to live there for a good income, I have broken down some of the perks and minuses of settling there so that you decide after acquiring a clear insight of the matter.

Pros of Living in Washington State

Washington State is abundant with stunning scenic beauty. It comprises of coastal beaches, fishing locations, several beautiful parks, hiking trails, rain-forests covered with moss, adventurous mountains, and crystal-clear lakes. On top of such breathtaking sceneries, this state also consists of 120 state parks, preserves, 3 national parks, recreation areas, and countless wilderness areas. With these many natural sceneries, this state is rich in clean water, which in the present impure world is an appealing bonus point.

Washington State is the home for several big companies such as Microsoft, Costco, Starbucks, Boeing, and Amazon, and thus have unlimited availability of jobs with decent pay rate. The job markets of this state, especially in the sector of tech, is one of the best in all of the United State. At around 2019, the unemployment rate in this state was around 4.6% and the average income was around $66,174.

In Washington State, residents aren’t required to pay a corporate or personal income tax. Instead of that, Washington State pays for its roads, law enforcement, schools, and other services by collecting real estate and sales tax, which is also not too high as compared to the other states.

One of the most appealing factors of Washington State is the diversity in its population. People from several corners of the world like Asia, Spain, etc. move to this state for education. As per a study, the Washington State offers the school system ranking 12th largest in the U.S., due to which students from several countries study there making its schools diverse and more approachable for foreign students.

According to the national Gallup poll, residents of the Washington State are much happier and satisfied with the facilities, opportunities, and natural beauty of that place such that majority of the residents there as compared to other states, have rated it as the best or one of the best states for living.

Cons of Living in Washington State

As per a study, per year Washington State gets around 73 inches of rain, which does keep it green and lust, but will also result in about 150 rainy days per year and several cloudy days. This limits the amount of Vitamin D one gets through the sun and people fond of sunny days shouldn’t consider western Washington. The temperature here at its hottest days rises to about 250C during the day and falls to 140C at night.

Because of the immense opportunity to make your life through great education and career opportunities, lots of people move to Washington State and populate it. With people comes their ride which mostly is a car. An increased number of cars on the street means more traffic on the road and thus more chances of you getting stuck in the traffic. As per a survey, in the United States, the traffic of Seattle ranks the 9th worst, where an average driver in a year, spends about 55 hours inside their car.

Living in Washington State doesn’t come cheap as with the high income, the price of the average home also increases. Just like how this state gives people a good opportunity for a decent income, it takes back with high housing, grocery, and transportation cost. In average, at around 2019, an average home in Washington State cost around $3, 69,900, while the average cost of the same home throughout the U.S. is $2, 36,100.

Before you get mesmerized by its beauty and facilities, the crime rates of this state are something you must consider carefully before deciding to move here. In 2019, the crime rate of property per 1000 residents in Washington State was higher than the average crime rate of the United States. Also, some violent crimes like murder, rape, robbery, and assault are relatively higher than many other states.

As per the Agency for Health Research and Quality, and the U.S. Health, the rating for health care quality of the Washington State is comparatively lower than many other states. However, this factor doesn’t stand important for fresher healthier people to take into consideration while moving to this state.

Concluding, I would like to say that deciding where to live and what to pursue is completely upon you, but just like knowing the pluses and minuses of a gadget you buy, knowing the same about the place you’re planning to move to is also important.

Thus, I hope this article has aided in clarifying your judgment on whether or not to move to Washington State by highlighting its perks and drawbacks. As mentioned above, this state is great for people in search of good education and career along with its mesmerizing beauty, but at the same time, the traffic, climate, and crime rates are something one must think thoroughly before making any decision.