Net neutrality means treating all the internet connections equally and all the contents on the internet without discrimination. The ISPs have limited rights to change the contents posted by the user which are seen by the targeted customers unless they are illegal activities. 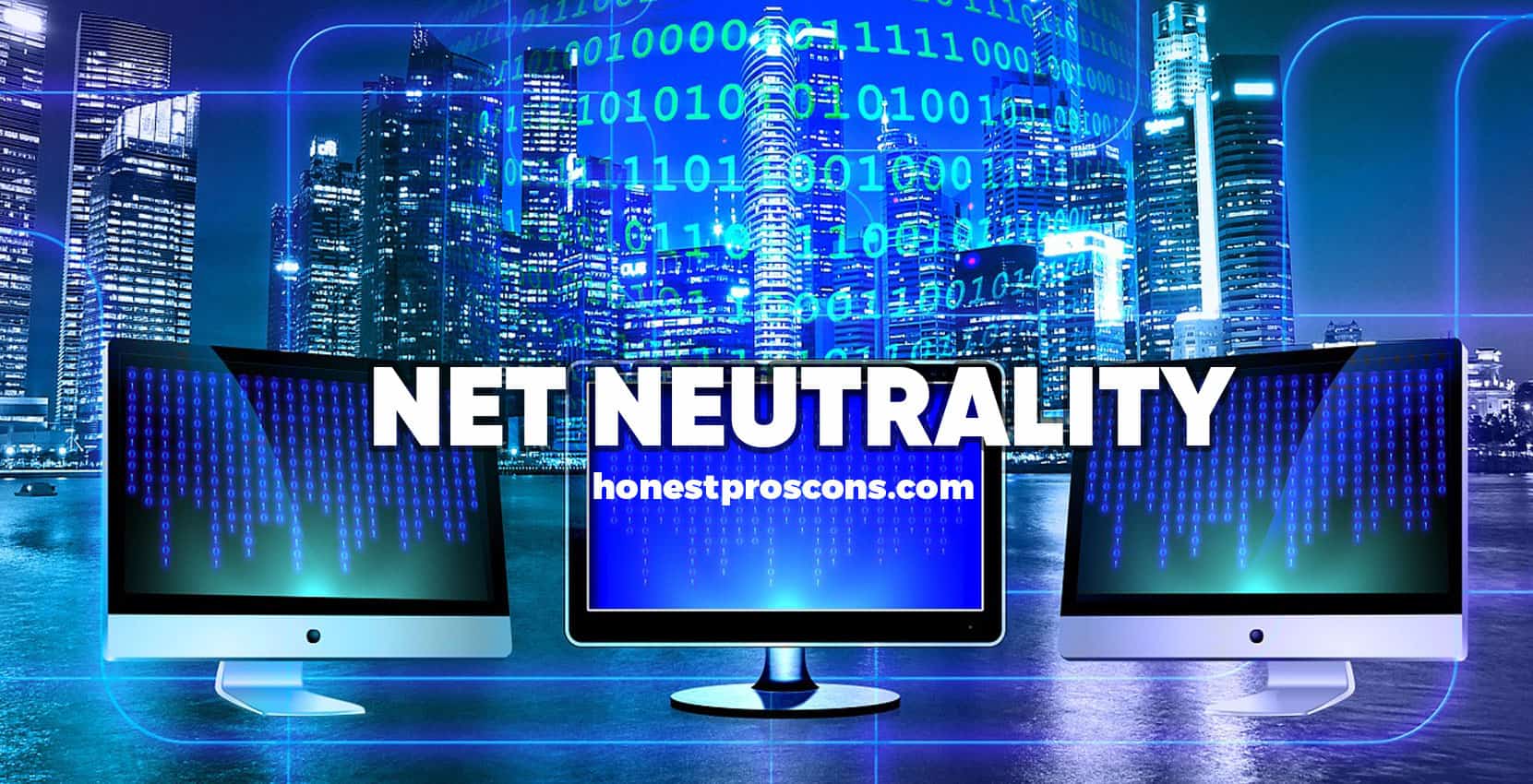 There are many countries that still make the boundary according to their rules, and most of them even do not apply it. It means if the app is provided free by the developer then it should be free worldwide, but for example, in Portugal, some apps are being charged.

Debate on net neutrality is going around which concerns the internet user and ISP providers. They both are put with their individual benefits and view, for the consumers it guarantees the authentic and neutral information worldwide when its treated equally as per the ISPs they are limited under the rules and restrictions even after being the service provider and not many profits are there to be gained which seem fair and unfair both ways.

Here are some of the pros and cons of net neutrality.

It provides certain controls to the ISP on what is going through there stream and provide users with more freedom to work on the issue of data. It creates equality in the internet world.

There would be no modification made on the content of the web pages if the certain people, company or the provider doesn’t like the data delivered to the customers, unless and until they are illegal content provoking illegal activities.

This maintains and neutralizes the World Wide Web and increases its motive or productivity encouraging the users. All the data or content shared and read worldwide will be the same as no rights are given to the internet service provider to change it. No discrimination in the information delivered preserving its authority.

There is no need for the clash between the competitors or big companies hampering the small ones. It provides equal opportunities as well as the same platform to all. In the business, it provides benefits to the customer, who can choose whatever they want rather than see what they are provided.

Freedom of expression as well as speech motivates, inspires and encourages people to try to extend their limits. If your work is not appreciated or its discarded, no need to worry among the billions of people there might be someone who can appreciate and apply for your work in a beneficial way.

You can show your talent or skills and earn lots through the internet. The activists or reporter can flash out the original news if that was restricted to broadcast nationally, now it goes international help and voices will arrive from abroad for your support. It helps to revolutionize the new world.

In 2015 under net neutrality verdict, the law classified ISPs as utility providers, which encourages the internet to be a necessity rather than a luxury. It has helped lots of people in many ways all around the world.

All the public utilities, like paying bills for water, electricity, etc are done from home no more queueing in the office. You can buy your movie tickets and plane tickets choosing suitable seats and prices.

Everything is being accessible which makes customer’s life easy and maintains quality of life. What they want to cook they can watch on Youtube if its Italian cake or french dish.

Net neutrality encourages legal contents and data whenever there is something fishy or illegal activities are spotted, they can still be prevented by ISPs.

The videos or the post help to identify and informs the public about the type and scenario of the crimes happening around the world spreading awareness.

No one is paying for the data

Everyone is paying for the service, not the amount of the data they are using. It costs the same if it’s used by the individual or by the office or company according to the package.

Net neutrality denies the right to charge more from the users who use a large amount of data or does work regarding the content analysis.

Customers who use less bandwidth is satisfied to use their plan rather than switch to high bandwidth activities.

When there is less profit none of the investors will be attracted to the industry nor collaborate with the existing ones. In the absence of net neutrality, ISPs can charge sites like Netflix and Amazon more according to their usage and use it in building and advancing their infrastructures and making internet accessibility faster. The more the service higher the price cannot be applied in this field which prevents the growth in the industry as well as the infrastructure and we cannot use the better and faster service tomorrow.

There is competition in all the markets available on the internet and its news grows faster gets viral immediately. In such scenario, ISPs are able to assign which sites to appear fast and which sites to slow down as they allow the bandwidth.

They will be charging more to certain sites and make a deal with them to make others slow for their benefits. Here customers are left with limited choices.

Such as most of the news sites are loaded slowly in the internet browser but when we go to the broker’s office its live and instant updates are shown.

Like the freedom of speech is better in one hand but on the other hand, it goes the same for the rumors and trolls that come on the internet. The videos showing violent content and provoking ill habits like smoking, drinking and taking drugs are harmful to society.

Parents are more concerned for their children as ISPs cannot control such sites they just can restrict the age which is faked by the users.

Some comments on social media about religious beliefs or some politics-related issues can rise the protest in the street and the end result might be bloody.

When the big companies are investing more in the internet and ISPs then the idea of providing free internet access would no longer be available. Providers could charge and restrict whomever they want.

This may lead to any discrimination in the social, economic field and prioritize the wealthiest for faster access to data. This increases the cost of the product as the companies are investing more on the internet and the ISPs would also look to gain profit charging on the data used by the customers. This could also mean a step back in terms of satellite internet. 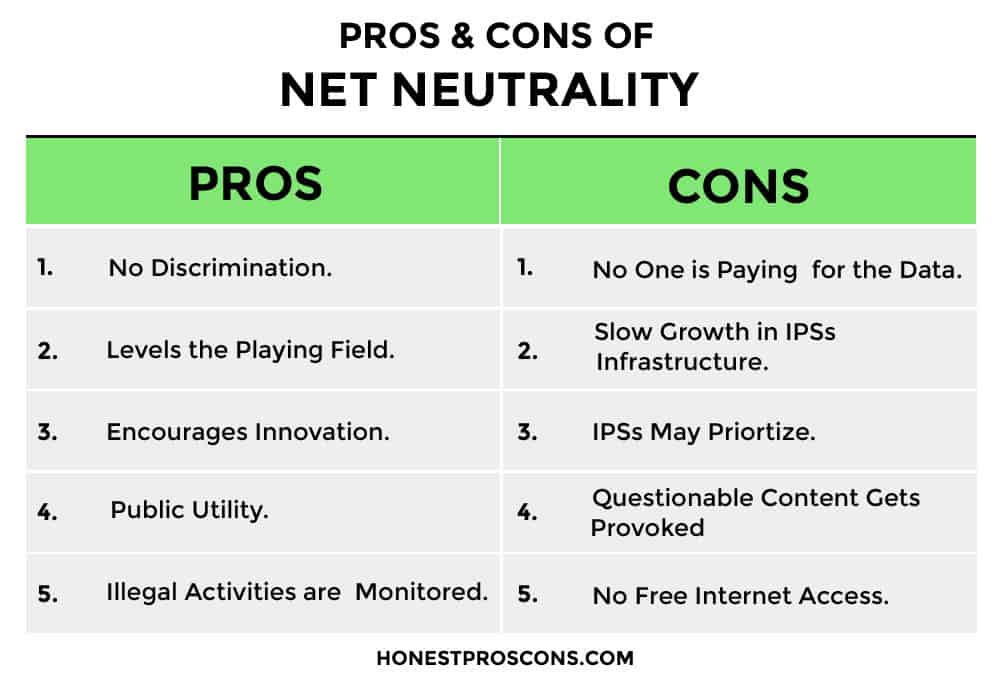