Renewable energy is the type of energy that is generated from natural non-perishable sources or can be replenished within human life. Some of the sources of renewable energy are Solar, Geothermal, Wind, hydro, tidal, biomass, etc.

Pros and Cons of Renewable Energy

There is another type of energy in contrast with renewable energy i.e. Non- renewable energy. It is generated from the sources that will not be replenished within human life e.g. gas, oil, or coal. 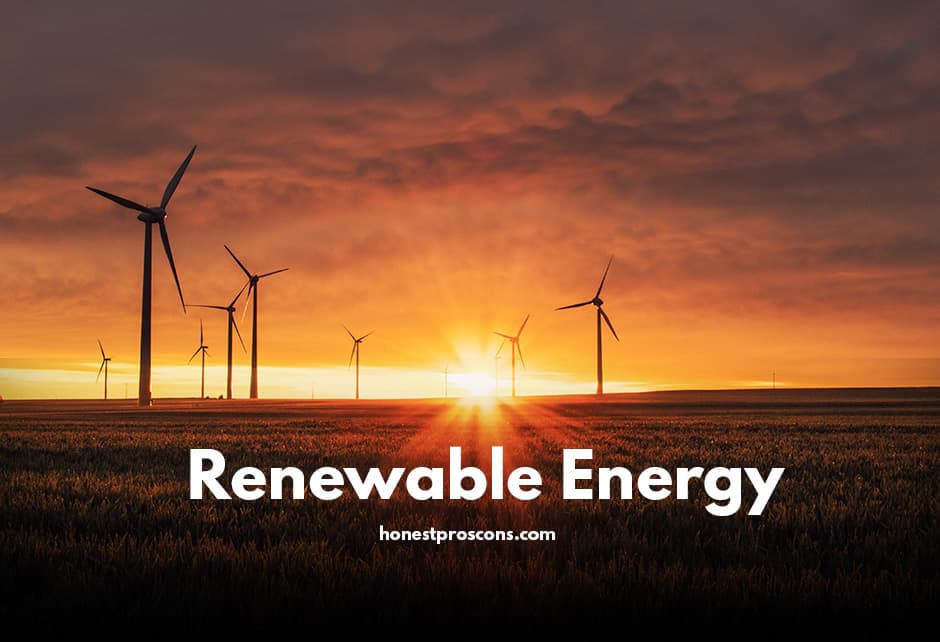 Focusing on renewable energy, mostly the main source is Sunlight or Solar energy. Sunlight can be directly captured and used for various purposes. However, other sources are also useful for a different use, we will talk about this later on.

During the mid-1800s, the main source of renewable energy was wood and biomass. People used wood for cooking, lighting, and heating purpose. Similarly, until the mid-19th-century people used traditional biomass energy which was converted to liquid biofuels and biogas that can be burned as fuels. However, in the last century technologies like pyrolysis and gasification developed that helped extraction of energy from biomass without combustion.

It helped us to use a different source of clean energies like waste tires, animal manure, and plant clippings.
In 1887 a famous scientist observed the photoelectric effect when light hitting certain objects urge electrons to flow and produce electricity. Later, Albert Einstein worked on the project and did a more elaborative study. He also won a Nobel Price Award for this.

Gradually, people started using wind to drive ships over water. Hot springs were also used as a source of geothermal energy for bathing purposes.
In 1905 the first use of geothermal energy took place in Italy. A farmer drilled a well, hoping he would get cold water but a hot water stream was found. Later, they tried putting a turbine on the stream for generating electricity as well.

Similarly, in the 1970s many environmentalists promoted renewable energy as a source of replacement of non-renewable energy that gets depleted easily and gradually. They also encouraged renewable energy for an escape from dependence on oil, afterwards, first electricity-generating wind turbines came into use.

Along with it the categorization of renewable and non-renewable sources of energy came into general use, sustainability and energy security issues arouse.

Since renewable energy is generated from non-perishable sources, it can be used frequently without any limitations like the use of fossil fuels. Renewable resources never run out and can be easily available in a natural environment.

Sources used in renewable energy are nature friendly. It doesn’t pollute the environment or has a minimal wastage in the environment. Also, it does not contribute to global warming.

Diversification in energy supply locally helps to prevent the importing of other fuels or reliance on foreign fuels. This reduces the cost of imports and can bring economic benefits to local places.

Renewable energy is generated from natural resources. It can be directly generated from an ample source from nature which leads to low maintenance costs compared to traditional generators or other non-renewable sources.

Renewable energy is not generated continuously and easily. It needs a gradual process with lots of patience. It can be difficult to generate large quantities of electricity depending only upon the natural phenomena compared to traditional fossil fuel generators.

Concluding the article, we can say that renewable energy can effectively compete with non-renewable energy as it is far better than fossil fuels. Renewable energy holds lots of advantages to the environment and all the living creatures. It is completely safe and doesn’t contribute to global warming issues. It is economically beneficial as well and the most important thing is it is freely available in nature in an ample amount.

However, we cannot control the weather and natural calamities as well but we could manage sources properly to mitigate the problems faced with renewable energy. Reducing the amount of energy we use will reduce the need for a big supply of source of energy. Building more energy facilities can help to meet our energy demands as well.
Hence, there should be a balanced use of different energy sources. This will help to mitigate the problems regarding renewable energy.