The concept of self driving car appeared in the 1960s, turning autonomous cars from a mere science fiction into reality now. As of today, numerous major companies including Ford, BMW, General Motors, Mercedes, Benz have invested in self-driving cars.

The self driving cars navigate the way themselves through radars, cameras, and sensors adjusted in their system. These sensors process the movement of other vehicles, pedestrians or bikes on the road.

For example, Tesla cars use 8 cameras, 12 ultrasonic sensors, and a front facing radar that analyzes the vehicles surrounding, preventing any possible damage. Also, 5G cellular networks, which are 1000% faster than the regular 4G LTE, are said to be implemented in the near future to increase efficiency.

Pros of Self Driving Cars

Globally, 1.5 million people die in vehicle accidents every year. In the U.S alone, the number exceeds more than 40,000. 93% of the car accidents are said to be as a result of human error. People tend to lack vigilance, resulting in numerous accidents.

For instance, you can easily get distracted by a phone call, message or you could get lost in a conversation with anyone in your vehicle. This means there’s a high possibility you may hit any pedestrians or crash your car anywhere. This is the reason why experts believe self driving cars can reduce traffic fatalities caused by human error.

Autonomous cars have advanced technology which keeps them alert and undistracted at all time, unlike humans. Researchers of DoT have estimated that self driving cars can reduce accidents due to human error by up to 94%, saving millions of lives.

Road crashes cause a considerable amount of economic loss. These expenses arise from the treatment cost, repairment of the damaged car and properties if any. According to the WHO, road crashes cost most countries more than 3% of their domestic product. Autonomous cars will drastically reduce the number of accidents, saving millions of dollars if it’ll be integrated within our transport, worldwide.

3. Accessibility For Those who Cannot Drive

With a car that can drive itself, you won’t ever need to worry about not having a license. Suppose, emergency situations arise where you have to reach somewhere but you can’t drive. With the help of autonomous cars, you can reach your destination without any delay. Even for disabled people, commuting becomes a lot easier and enjoyable experience.

Rather than using combustion engines like regular vehicles, most companies design self driving cars to be electrical. Using electrical vehicles reduces carbon emissions that are released into the atmosphere. If you drive, you might use you your brakes more than necessary, which burns an excessive amount of fuel. In contrast, self driving cars perform at its maximum efficiency most of the time, decreasing carbon emissions.

5. Easier for Those Who Hate Driving

Driving on a busy road can be stressful, especially if you are traveling long distance daily. Commuting to and from work every day by autonomous vehicles can be an enjoyable experience.

The time you’d spend driving can now be utilized by spending leisurely or productively. For example, you can use your commute time to relax, sleep or watch t.v instead of having to pay attention to the road.

Cons of Self Driving Cars

No matter how advanced technology is used, there’s always a high possibility of self driving cars making mistakes. For example, a Tesla Model “S” in its autopilot mode failed to hit the brake at the right time and crashed the car into a trailer, causing the death of the passenger.

On the other hand, the manufacturers also need to constantly update the software to make the cars run smoothly. Consequently, there may be errors in the updated software, increasing the risk of traffic fatalities.

Worldwide, the number of countries using autonomous cars is still low, mainly due to the hefty price tag. The estimated value of a self driving car is at least $100,000 more than the price of normal vehicles. Although it reduces the number of crashes and saves some amount of money, it’s impossible for everyone to be able to afford these cars.

There are a lot of people working in the transportation sector. Using autonomous vehicles means numerous public transportation drivers, personal drivers or taxis drivers will be left jobless, impacting the economic conditions of the whole country- directly or indirectly. Simultaneously, the people involved in the business of gasoline will have to suffer because these cars will mostly be electrical.

4. Negative Impact on the Environment

One other downside of self driving car is that more people might buy there own personal vehicles, increasing the amount of carbon emissions. And, people could prefer longer commutes due to how convenient and easy it is to use self driving cars. With more vehicles and more commute time, the negative impacts on the environment will increase.

Although the companies claim that they’ll fully protect your private information. There are more risks since self driving cars use technology such as GPS to navigate their way, which can make your location more accessible to other people. For example, hackers can easy access your personal data stored in the software.

As this brief article shows, self driving cars have a huge potential in the near future but as of today it’s accessibility is limited. Although it provides you more time, increases productivity and drastically drops the risks of traffic fatalities, one cannot ignore the fact that even these technologies malfunction. Thus, trusting it wholeheartedly might not the smartest thing to do. 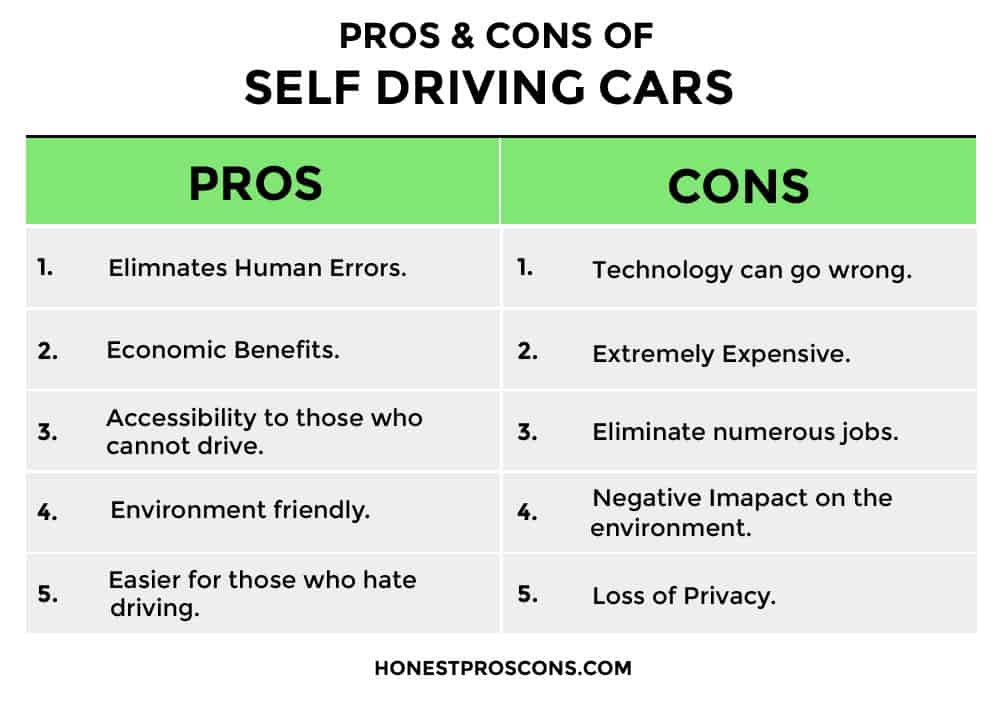