Capital Punishment or “Death Penalty” or “Death Sentence” is a government-imposed practice wherein a person is put to death as a punishment for the crime committed if proven guilty. Those crimes that are declared to be punishable only by a death sentence are called the capital offence. 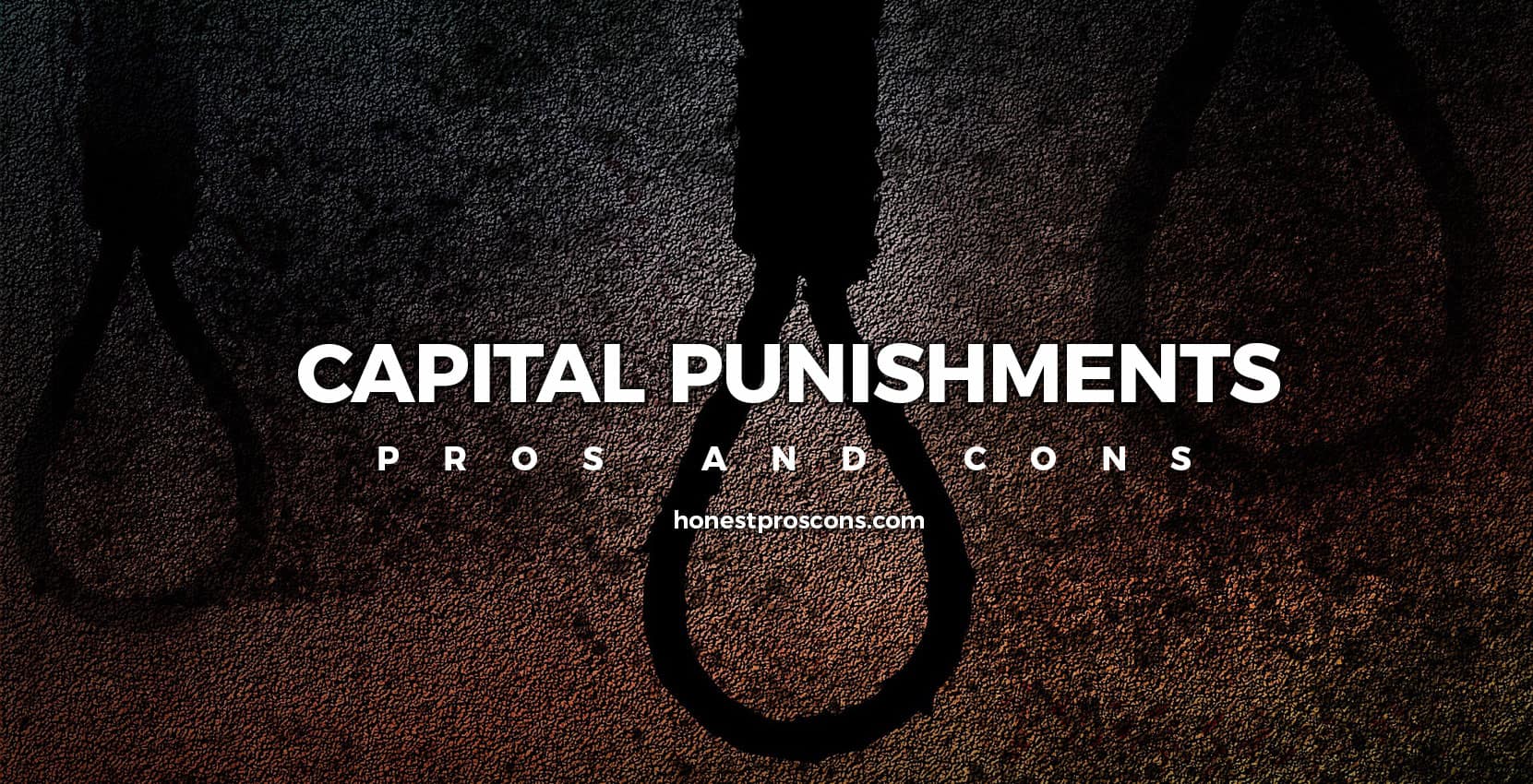 Different countries have different categories of crime which may or may not be entitled to Capital Punishment or Death Penalty. The most common types of crime that are entitled to capital punishment are murder, mass murder, child rape, terrorism, espionage, aircraft hijacking, a war crime, genocide, drug dealing etc.

Pros and Cons of Capital Punishments

Should the death penalty be enforced by countries or not?

It’s a debatable topic whether or not capital punishment should be enforced. One can argue that mistakes and wrong decision can be made by humans and should be forgiven, while the same thing can be counter-explained saying if such wrongdoings are not penalized and punished it might encourage others to do the same thing as an act of revenge or whatever.

While it remains an active topic of debate and controversy, there are points that speak for both sides. Here is a list of the pros of capital punishment or Death penalty.

Punishing the felons based on the committed crime deters anyone who is even distantly considering getting into it for whatever reasons it may be. Most of the countries have enforced capital punishment strictly to those crimes that are extreme in nature.

Capital punishment in many cases has avoided or reduced the number of crimes because the outcome could result in a death penalty. The fear of getting a death sentence deters people from getting involved in any form of criminal activities.

2. Justice to the Victim

Seeking justice after being the victim of a crime is the only way to go about it. After all, the law enforcement authorities in all the countries work towards justice, peace and harmony of the people.

Punishing the culprit is not only for the vengeance but for being fair and justified. The victims and their family can spend the rest of their life in peace without looking over the shoulder and there will be less risk of being the victim again.

3. Avoid the Prisons from being Overcrowded

As the crime rate is always increasing, there are very few countries where prisons are not overcrowded. Enforcing capital punishment would in a way reduce the number of incarcerated people in the prison thereby sending a message that there is zero-tolerance for horrific crimes

The extreme levels of criminal activities are something that is beyond rehabilitation. No consultation or rehabilitation works when people are willing to go past the legal limitations of doing things. Capital punishments are also considered as the play of karma that justifies the crime.

5. No-Risk of the Accused Person Getting Back to the Same Crime

The only way of dealing with the extreme horrific crimes are capital punishments that leave no chance for the accused to commit other crimes. Capital punishments are only to the ones who deserve no life because of the crimes they’ve committed.

1. No Opportunity to Change

People have been debating that capital punishment is too harsh and allows no opportunities for those who are willing to follow the right path in their life after learning and realizing about the activities they got themselves involved in.

There should be a constructive way to deal with criminals and let them improve themselves and capital punishment eliminates all that.

2. Violation of Human Rights and its Practices

The death penalty is the ultimate cruel, inhuman and degrading punishment. Amnesty opposes the death penalty in all cases without exception – regardless of who is accused, the nature or circumstances of the crime, guilt or innocence or method of execution.

That’s what Amnesty International has to say about it. According to them, people who are underage, mentally ill are also executed which is not acceptable and wrong.

Amnesty International holds that the death penalty breaches human rights, in particular the right to life and the right to live free from torture or cruel, inhuman or degrading treatment or punishment. Both rights are protected under the Universal Declaration of Human Rights, adopted by the UN in 1948.

From the information revealed by the Death Penalty Information Center, it costs way more to conclude a case with the death penalty than housing a life sentence prisoner.

The average cost of a case with no death sentence is around $740,000 whereas the costs of cases with death sentence come out to be more than $1.2 million.