When the Samsung Galaxy Note 5 came out in 2015, it was a sensation!
It came with revolutionary specs, an exciting S Pen, and raving reviews. Anyone who was anyone wanted to get their hands on the magical Samsung Galaxy note 5.

But, how does this heavy-hitter fare against modern technology? And, how has the Samsung Galaxy Note 5 aged since its release?

We will be looking into the pros and cons of this famous smartphone, to see if it’s still worth its weight in aluminum, or if it’s better off as a paperweight. 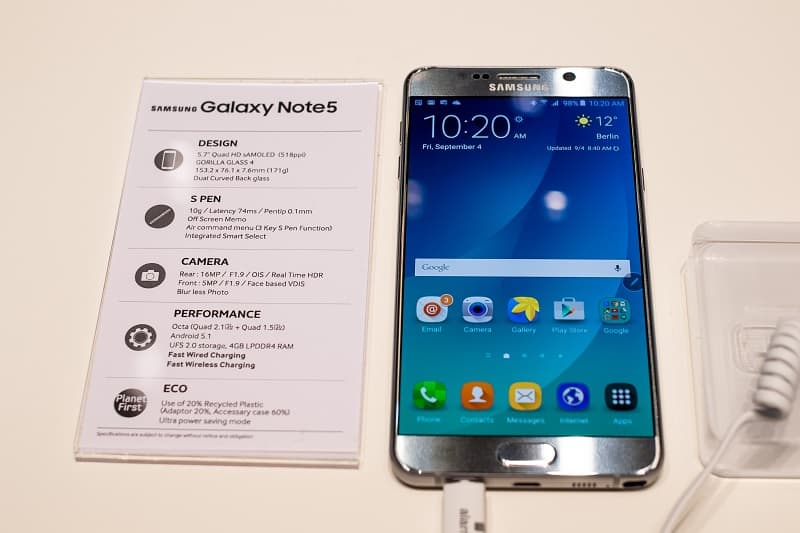 Samsung Galaxy Note 5 Pros and Cons at a glance:

All that, plus a sleek glass and aluminum case, a first of it’s kind for Samsung. The case was designed to be sleek yet hardy, and Samsung certainly did an outstanding job there.

Many reviews speak about the Samsung Galaxy Note 5’s capacity for being dropped multiple times, without the screen or casing cracking. Seems a little impossible today, where phone screens seem to crumble at the mere suggestion of a knock.

This build quality shines so brightly it made it to the top of our list of pros about the Samsung Galaxy Note 5, so let’s dive in and get to know this phone a little better.

The 5.7-inch touch screen on the Samsung Galaxy Note 5 may seem small by today’s standards, but back in 2015, this was a titan of a screen and had better resolution than any of its counterparts.

The colors and resolution have aged well, and the Note 5 still does better for clarity than some of the flagship models of later years.

Buying an older model phone is an effective way to spend money, although the chances are here that at least you will not be spending money on a dud phone. They are, at the very least, much cheaper than they were in 2015!

The S-Pen of this model works as well as any newer model Galaxy note. And, although it cannot take pictures nor does it have the lowest latency, it can edit precisely and with ease.

Although the software is outdated, the user experience with the Android 7 update is passable at least.

Pictures taken with this camera are sharp in the daylight and have great colors. However, the dynamic range is low, and there is something to be said for there only being on camera on the phone. The 5 MP front camera is not great, but it does the trick.

The Samsung Galaxy Note 5 really was a revolutionary phone, and its importance cannot be understated. If owning a phone for the history it holds is important to you, this phone is definitely the one for you.

The fact that the Samsung Galaxy Note 5 comes only in 32 GB and 64 GB models, without any external storage capacity, makes it less than ideal as a storage device. The 4 GB RAM will also suffer as a result of this.

While this may seem like a no-brainer today, in 2015 having a phone that could not remove its battery was a travesty. And, to be fair, it still is to a point.

This problem did not exist when Samsung first produced this phone, but, as the phone ages and new batteries become scarcer and scarcer, you will begin to see a serious decline in the capacity of your phone’s battery life.

No new Updates for the phone

The Samsung Galaxy Note 5 does not support any software updates after Android 7. This will make installing and running new Apps or games laggy at best, and completely dysfunctional at worst.

If you needed a reason to not buy a Samsung Galaxy Note 5, this is it.
Samsung no longer manufactures the phone, nor does it manufacture any of the parts for it.

This means two things; First, you are more than likely going to be purchasing a second-hand phone. Second, if your Samsung Galaxy Note 5 sustains any damage, you are going to have to search long and hard to find replacements.

Save your pennies for a newer model.

However, the fact that you cannot make new updates and will struggle to find decent parts for the phone are major drawbacks, and cannot be ignored.