In the summer of 2016, the United Nations declared that it considers the internet to be a human right. Even so, around half of the world population right now aren’t yet able to get online because cable connections can’t be slid everywhere; they require additional infrastructure to be drawn from. Additionally, challenges such as internet censorship are coming our way.

However, satellite Internet, the so-called “wave of the future” might change all of this.

So What Exactly is Satellite Internet?

Satellite internet is basically a wireless internet that only requires 3 satellite dishes; one at the internet service providers hub, one in space and one attached to your property.

Additionally, a modem with cables running to and from the dish is needed. The antennae dish at your property communicates with the satellite dish above earth’s equator, similar to how satellite televisions work. Currently, companies like SpaceX and Google are striving to refine this technology.

Undeniably, there are big challenges and like every other technology, satellite internet has its own upsides and downsides. Let’s get into some of the advantages and disadvantages of Satellite Internet.

Satellite links give coverage at any location on earth. A single satellite in the geostationary orbit can cover distances as large as whole oceans or continents. This wide area coverage makes internet access quick and easy despite all kinds of geographical obstacles.

In an unserved location, it costs anywhere between $10.000- $100,000 to lay a mile of fiber. In addition to the high investment, it may take several months to complete the fiber deployment and make it available to individual locations. So, if you lack terrestrial connectivity, satellite internet is the most cost-effective means of high-speed Internet access.

The satellite antennas can be instantly deployed and installed within a matter of a few hours. For mobile and transportable solutions, you can set-up and connect to the Internet in less than 10 minutes which makes it instant.

Latency is the amount of time it takes information from your computer to reach its destination. In the case of satellite internet, you have to send data to space, to your ISP and back again which causes it to have poor latency or a high ping rate. If you’re a gamer, satellite internet might not be for you!

In simple terms, your data cap is how much information you’re allowed to get. Depending on the service provider and purchased plan, you may have a satellite data cap as low as 10gb per billing cycle. This means that in one month-long period, your household network can be used to access 10 gigabytes of information before your service is impacted. When you reach your satellite data cap, you may be left without connectivity until your next billing cycle.

The weather affects the signal path of the satellite internet. In the case of rain, storms, and strong wind, the signal could be worse and there are chances of the internet not being there. Also, wind can cause physical damage to the dish as well.

Although installation cost isn’t a big deal, satellite internet is relatively expensive. You’ll pay around $100 per month for speeds of 2 Mbps. This is much more expensive than what we generally pay for much faster cable internet.

Even minor obstructions can block satellite internet signals. So, systems in tropical areas need to be constantly checked for trees growing into the path. In seasonal areas, a dish installed with a signal passing through a bare tree in winter may get blocked in the spring and summer when leaves form. Some signals may get temporarily obstructed by wind blowing trees into the path for short periods of time causing intermittent service.

While satellites seem to be a reasonable way to achieve internet access where there was none, the technology has not been fast, reliable, or responsive enough to compete with modern fiber or cable-based internet. However, that may change with efforts from giants like SpaceX, eventually providing internet access to every person spread in every corner of the earth. 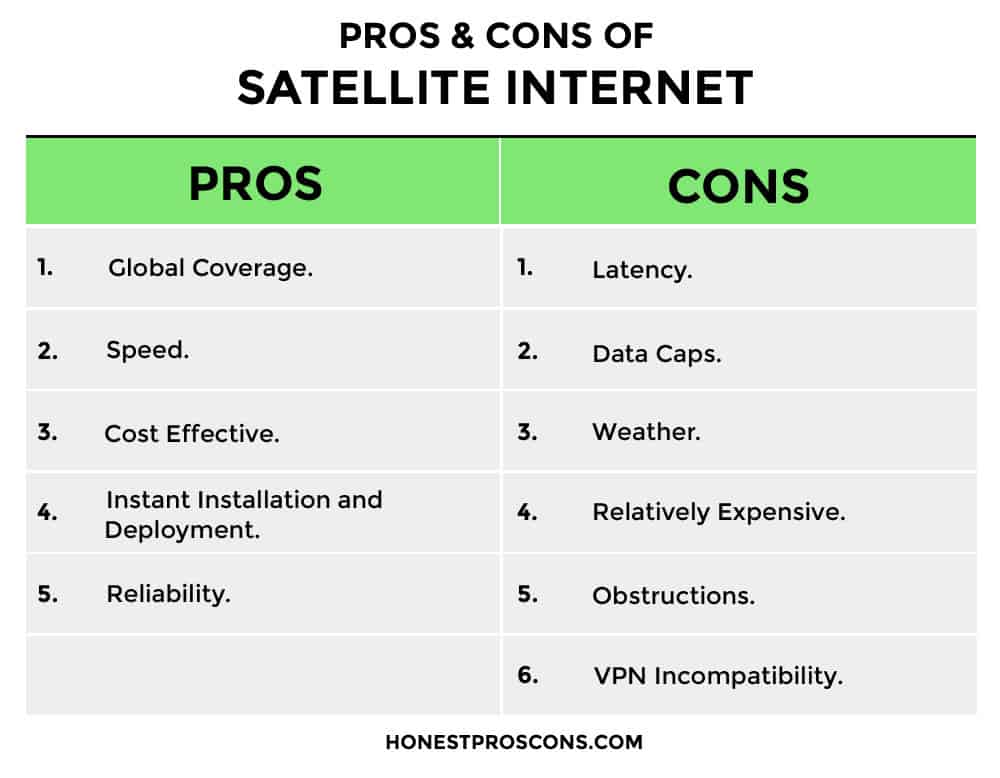