Social networking sites are the major platform on the internet for communication and exchange of information since the early 21st century. The social media platforms get updated regularly with features depending upon the need of the users and usage patterns.

In the early stage of the social networking era, people from all around the world started using to connect with friends and families to share and communicate through photos or text messages. Since the development and rapid growth of the internet speed, the usages increased more towards generating and sharing media such as photos, GIFs, and videos.

Though the usages and user behavior in different social media sites may differ, there are common pros and cons of all social networking sites or social media platforms. For example, there are more advantages for photographers or artists using Instagram while he/she may not get more benefits or attention on Twitter. Similarly, a journalist or author may have many pros of using Twitter.

In this article, you will learn about the advantages and disadvantages of social media.

Social networking sites are one of the best marketing channels available in this world. Social Media Marketing is the term described for the marketing technique used on social networking sites or platforms like Facebook, Instagram, Tiktok, Twitter, YouTube, etc. There are currently over 4 billion social media users globally ready to discover your information about your business or service. (Also read – Pros and Cons of Social Media for Business)

Almost all internet users do use at least one social media platform. It is easy to spread the message and invite many people to take part in events for awareness and activism.

5. Exchange of ideas and Collaboration

While ignoring the rest of the advantages of social media, some people prefer to use it just like a contact book. Not being actively engaged in the social feed, social media platforms like Facebook and Instagram are also being used only for communication purposes. Such platforms help us easily stay in touch with friends and family, and other like-minded people as well.

Like any other tool available for humans, Social Media Websites also have many disadvantages if you do not use them consciously. Unware social media users may encounter many different types of problems while using social networking sites. Here we list a few but most important cons of social media that everyone should be aware of.

Social networking sites are linked to an increased risk of mental health problems like depression, anxiety, and loneliness. Too much time spent scrolling through social media can result in symptoms of anxiety and/or depression. Teenager’s mental health is often negatively affected by this culture of comparison as well.

This is yet another challenge for social media companies. There are billions of fake accounts on various social networking sites including Facebook, Instagram, and Twitter. Facebook removes more than 3 billion fake accounts in six months and Five percent of Facebook’s monthly active users are fake, the company said.

This is probably the most challenging problem for social media companies. Fake news and misleading information can go viral in no time on social media platforms. On Facebook, more than 80% of people who react to the link do not read the complete article or content. Due to which many publishers and spammers are misusing the platforms by sharing fake and misleading information.

Cyberbullying is also associated with depression, anxiety, and an elevated risk of suicidal thoughts.

Most of the users of social media sites are not fully aware of the security measures they need to take care of while using social media platforms. People share thoughts, personal experiences, photos, etc on social media sites. Such information can be helpful for hackers to hack your accounts in social media, emails, or even your mobile phone.

Several personal Twitter and Facebook accounts have been hacked in the past that have affected the individuals’ personal lives.

Your behavior on social media can help people or companies know who you are. It is not hard to find how many friends you meet daily, interact with, or what type of food you like. Based on your check-ins on social media, one can easily find where you hang out. Based on your check-ins, browsing history, interaction on various Facebook pages, groups, friends, or even links, bots can suggest the products or services. 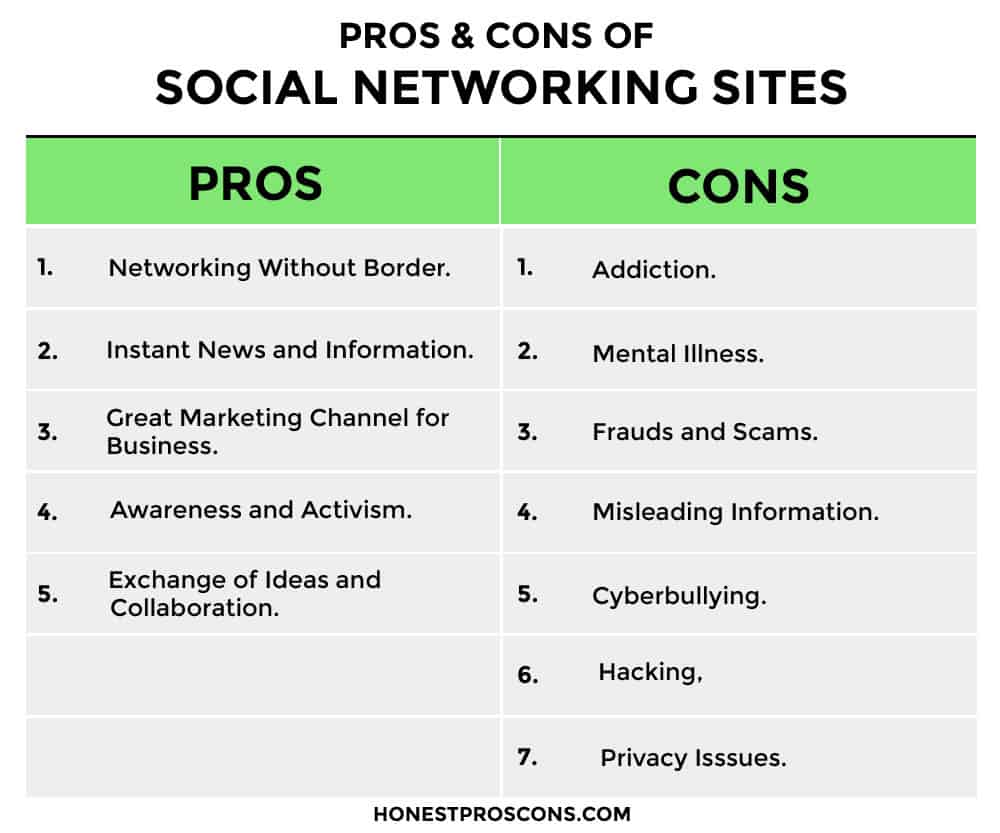 What do you think about Social Media Platforms? Did we miss any? – Please let us know!